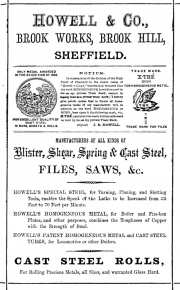 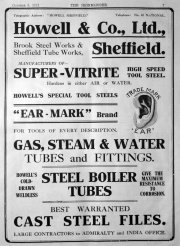 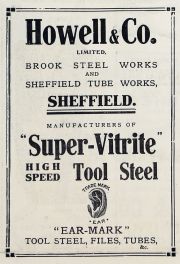 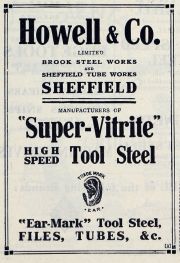 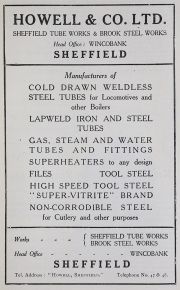 1868 'LAMINATED STEEL ROPES. We have just seen a sample bundle of steel strips, or ribbons, bound together by thin wire ; the bundles contained about 48 strips, 3in. wide by 1-16 in. thick, making a sectional area of 9 square inches. It was manufactured by Messrs. Howell and Co, Sheffield, and Mr. Howell tells as that the above bundle of steel strips could not be broken with a less strain than 720 tons, equal to 80 tons per square inch, and that he will guarantee there shall be no permanent act of the metal with any strain less than 30 tons per square inch. He can roll these steel strips of any length required in practice, and proposes that suspension bridge chains ahould be made with them....'[1]

1874 'Joseph Bennett Howell, is a steel manufacturer, residing at Sheffield, carrying on business under the style of Messrs. Howell and Co'[2]

Amalgamated with the Brook Steel and File Works

1930 Two large tube makers Stewarts and Lloyds and Tube Investments entered into an agreement to reduce duplication [5]. Although this was to “facilitate exchange of information and technology” it resulted in Stewarts and Lloyds gaining a half interest in the Bromford Tube Co of Erdington, Birmingham and then acquiring the other half in 1945; and in Howell and Co Sheffield, this being given up in 1938.

1971 Tube Investments's subsidiary Howell and Co, part of the steel tube division, was to be closed [6].