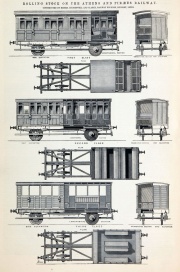 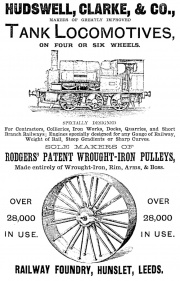 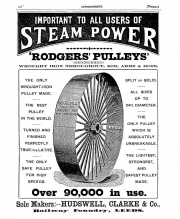 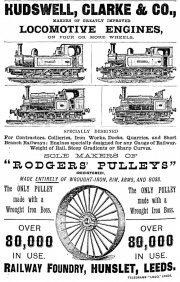 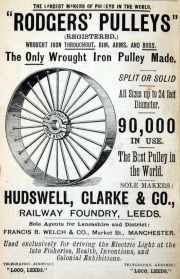 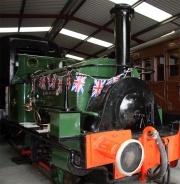 1893. Locomotive No 402. Exhibit at the Vintage Carriages Trust

1893. Locomotive No 402. Exhibit at the Vintage Carriages Trust 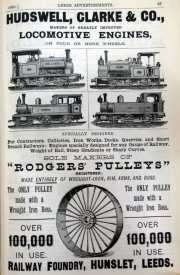 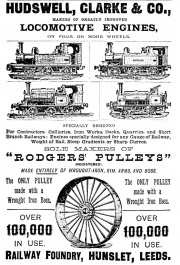 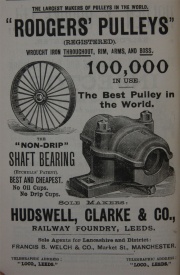 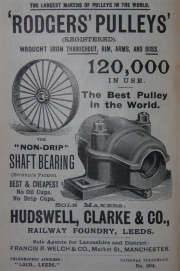 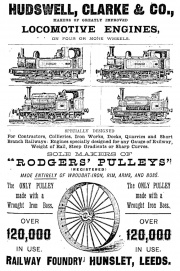 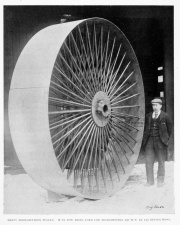 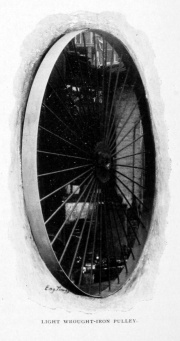 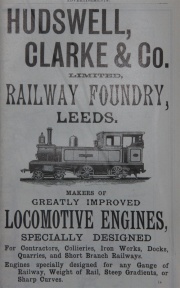 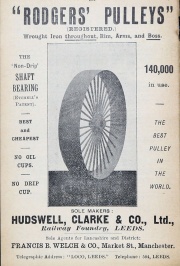 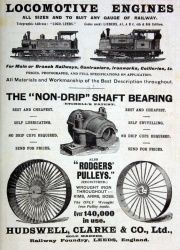 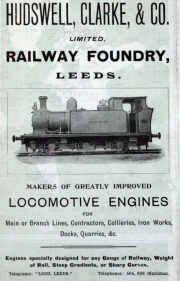 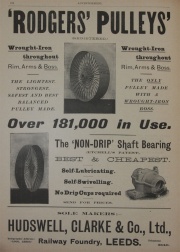 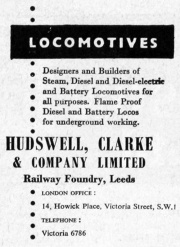 of the Railway Foundry, Leeds

An engineering and locomotive building company.

1860 William S. Hudswell founded the company having served his apprenticeship with Kitson and Co with John Clarke the work's manager from the same company.

1870 The company name was changed to Hudswell, Clarke and Rodgers.

1880 Rodgers left the company and the name changed to Hudswell, Clarke and Company.

1899 The company was registered on 29 November, to take over the business of locomotive builders and general engineers of the firm of the same name. [5]

1900 Around 575 locomotives had been built since the company started.

1911 Manufacturer of Locomotives for the Railways.[6]

1927 Around 1,600 locomotives had been completed since the company started.

During WW2 the company diversified into armaments, as did so many other engineering companies. In the post-war period Hudswell, Clarke and Co Ltd (its full title, and note the comma) was closely involved in many secret programmes, including the British nuclear weapon programme.

The airframe for the first British nuclear bomb, Blue Danube was manufactured by Hudswell Clarke at its Roundhay Road, Leeds. The airframe for Red Beard, the second generation tactical nuclear bomb, followed with that for Violet Club, the Interim Megaton Weapon; and there were many other projects.

The locomotive part of the business is now part of the Hunslet Engine Co. Locomotive-building was always only one part of a diverse product inventory that included underground diesel-powered mining locomotives, hydraulic pit-props and related mining equipment.

All the bombs detonated at the Christmas Island H-bomb tests were contained in airframes designed and built by Hudswell Clarke. The company were also major contributors to other military projects, e.g. the Centurion main battle tank conversion into an armoured bridge-layer that served with the British Army for many years.

The contraction of defence manufacturing in the mid-1960s contributed to the sale and demise of the company.