Hull Station in the background of the Great Central Railway. Fred Rusling is the tram conductor, son of Thomas Rusling. 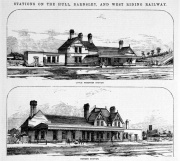 1880 The company was incorporated as the Hull, Barnsley and West Riding Junction Railway and Dock Company. The line was designed and constructed by William Shelford in partnership with T. W. How. The line was intended to break the monopoly of railway and port facilities held by the North-Eastern Railway at Hull. The newcomer possessed the Alexandra Dock as well as a local railway system.

1885 The Hull and Barnsley Railway (HBR) was opened on 20th July. It was incorporated as the Hull, Barnsley and West Riding Junction Railway, having a total projected length of 65.75 miles; the Alexandra Dock in Hull, opened 16th July 1885 was included as parts of its construction. Various joint lines were operated in conjunction with the HBR.

The main line ran from Hull to Cudworth, and the company included two other lines, the South Yorkshire Joint Railway from Wrangbrook Junction to Denaby, and later a connection to the Great Central Railway at Lowfield Junction, near Conisbrough and the Hull and South Yorkshire Extension Railway, in effect an eight-mile branch to Wath-upon-Dearne, opened 31st March 1902. Before the Grouping of 1923, the line was taken over by the North Eastern Railway.

1923 Incorporated in the London and North Eastern Railway

Alexandra Dock remains in use to this day, though rail connection was severed following its closure during the 1980s. The embankment line built to carry traffic from the Neptune Street depot to Alexandra Dock, remains in use, albeit mostly singled, as the sole rail access to the King George Dock and Salt End Oil Terminal in east Hull. A small section was re-opened from Drax power station through Carlton Towers, in the 1970s, and MGR trains continue to use this line.

The wonderful steam-powered Ouse swing bridge over the River Ouse was dismantled in the 1970s.