Grace's Guide is the leading source of historical information on industry and manufacturing in Britain. This web publication contains 143,339 pages of information and 230,023 images on early companies, their products and the people who designed and built them. 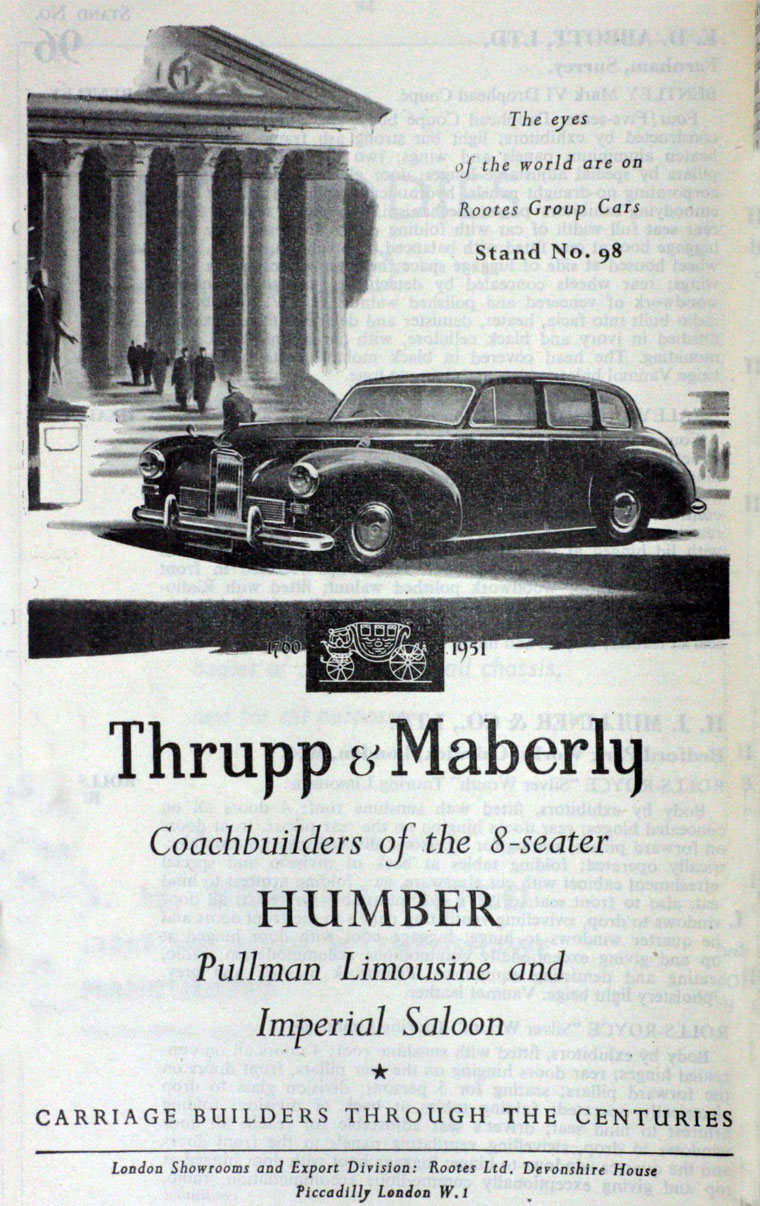 October 1951. Body by Thrupp and Maberly.

Note: This is a sub-section of Humber: Cars.

The Humber Pullman is a four door limousine introduced by the British based Humber company in 1930 as a successor to the Humber 20/65hp and long wheel base version of the Humber Snipe.

In 1939 an ungraded version was launched badged as the Humber Imperial, but post war the car reverted to the Pullman name.

The Pullman / Imperial was not offered for sale during the Second World War but some were still made and used as staff cars. It returned to the market in 1945 and remained in production till 1954, however.

Between 1948 and 1954 the car was offered with a central partition (for chauffeured use) as the Pullman, but without a partition was badged as the Humber Imperial for owner-drivers.

The 1930 car came with a 3,498 cc straight six cylinder overhead inlet side exhaust valve engine and a claimed power output of 80 bhp. The classic limousine style body featured rear hinged doors and in some respects resembled the Humber Snipe 80 with which it shared its engine, but the Pullman was longer and wider. For this heavy car Humber claimed a top speed of 73 mph. As well as the limousine, Landaulette and Sedanca de Ville bodies were available.

The following year, in 1931, the manufacturer lost its independence when the Rootes Group acquired a majority share holding in it.

A coupé was added to the body range in 1935 for one year only.

A re-bodied Pullman with two piece V windscreen appeared in 1936, sharing the 132 in wheel base of its predecessor, but with the overall length of the car increased to 196 in. Engine capacity was now raised to 4,086 cc while claimed power was 100 bhp . The power increase was also evident from the claimed top speed which now edged up to 75 mph. The chassis gained independent front suspension and hydraulic brakes were fitted in 1940. As well as the factory body options some cars were supplied in chassis form to independent coach-builders especially Thrupp and Maberly.

In 1939 the Pullman was joined by the Humber Imperial or Snipe Imperial which shared the engine with the Pullman, but was built on the 4 in shorter Snipe chassis and correspondingly brisker, with the advertised top speed now 81 mph. The car nevertheless remained spacious, and was favoured for use by British government ministers during the 1940s. Four and Six-light saloons and drop-head coupé bodies were available from the factory.

Availability ended in 1940 when the factory was given over to production of the ’Ironside’ Reconnaissance Car.

The Pullman re-appeared in 1945 with seven seat limousine and landaulette bodies, to be replaced in 1948 by a reworked and lengthened version on a lengthened chassis and designated the Humber Pullman Mk II.

From 1948 the car was available with or without a partition between the front and rear of the cabin: the version with a division retained the Pullman name, while for the mechanically identical owner-driver version the Humber Imperial name was now revived. The headlamps were no longer stand alone but fitted into the wings.

The Mark III version introduced in 1951 was little changed from the Mark II, apart from being even longer and having an all synchromesh gearbox. At 212 in the Mk III Humber Pullman was the same length as the Rolls-Royce Silver Cloud which would emerge from Crewe in 1955. Production was 2,200 Mk II and III Pullmans were made and 1,526 Imperials.

In 1953 more power was offered for the Mark IV Pullmans and Imperials, still with straight six cylinder engines, but now of 4,139 cc with overhead valves, and published power output of 113 bhp or 116 bhp.

After 1954 the Pullman name was removed from the listings, but in 1964 the company revived the Humber Imperial. The new car was essentially a top of the line Humber Super Snipe, differentiated by a vinyl roof, automatic transmission and a more luxuriously appointed interior. The range of large Humbers, including the Imperial, was withdrawn by Rootes in 1967.

The Pullman Limousine and the Imperial Saloon are outwardly similar in appearance, but differ in internal arrangements. The Limousine is an eight-seater in which the front and rear seats are divided by a sliding glass panel. The Imperial Saloon is a luxurious seven-seater and, of course, has no central division.

The interior of the Pullman Limousine is a fine example of British coach building skill. The rear compartment is furnished in beige West of England cloth and the woodwork is of polished walnut veneer. There are ash trays and cigar lighters incorporated in both rear armrests and reading lamps are fitted in either side.

Provision is made for radio and special heating and air-conditioning equipment, which are fitted as optional extras.