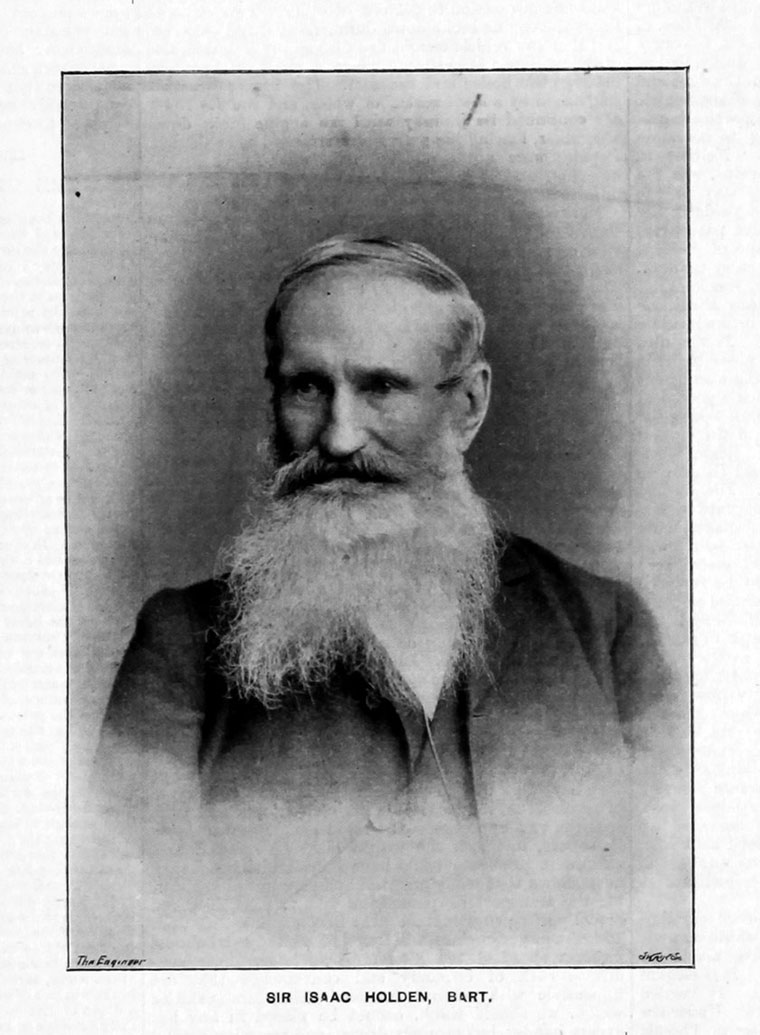 "...Isaac Holden died early on Saturday morning, August 13th. He had been ill for some time, but his death was not expected. He was a very remarkable man, and his career was not less remarkable than the man.

He was the son of a Yorkshire miner, and was born at a place called Hurlet, not far from Glasgow. He remained at school until he was ten, and then his father apprenticed him to two weavers to learn the trade. Young Holden was one of those boys blessed or cursed with an almost insane desire to acquire knowledge, and his early life closely resembled that of the more or less imaginary youths who work hard at a trade all day and read most of the night. For such men, as a rule, there is but one opening. They become teachers. That was Holden's fate. He taught at Leeds, and he taught at Sathwaite. While still under thirty he started a small school in or near Glasgow, but it was heart-breaking work, and he threw up the school and went as book-keeper to Messrs. Townend of Cullingworth, near Keighley. Here for the first time he began to work as an inventor. ...[More]

ALTHOUGH not an engineer, Sir Isaac Holden, Bart., who died on Friday morning, the 13th inst., at the advanced age of 90 years, was endowed with inventive and constructive genius sufficient to place him in the first rank of mechanics; his work in the perfecting of wool-combing machinery will entitle him to honourable mention amongst the industrial benefactors of the century.

He was well equipped for his lifework, for although born in poor circumstances, his father being a headsman in a Renfrewshire mine, he secured what must be regarded as a liberal education, none the less prized because hardly won. Indeed, as is the case with many worthily ambitious Scotch parents, the Holdens intended that their son should "wag his pow in the pulpit," and the role of school teacher was but a stepping-stone.

We have no occasion here to follow his scholastic career at Paisley, Leeds, Slaithwaite, and Reading, except to remark that its vicissitudes ultimately brought him in touch with one of the large woollen manufacturers when at Glasgow, and resulted in his engagement as bookkeeper with Messrs. Townend Brothers, Cullingworth, near Bingley. That was in 1830, when Holden was in his 23rd year.

Soon after his innate mechanical ingenuity was discovered, he became manager, and then partner, when he commenced that long continued striving after the perfection of certain mechanical appliances in textile manufactures.

In 1848 Isaac Holden and Samuel Lister established the company Lister & Holden in France. They built three factories to process wool, the sites covering more than 23 hectares, and employed 4,000 people. The company had a total of 500 carding machines and 370 combing machines.[4]