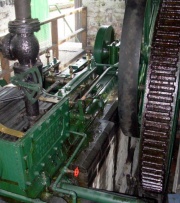 1846 'General Furnishing Ironmongery
Cutlery, Lamp, & Stove Grate Showrooms
13, Strand, Torquay
J. C. STARK, MANUFACTURING AND FURNISHING IRONMONGER
Begs to call the attention of all those who suffer from the annoyance of Smoky Chimney to KITE’S PATENT VENTILATORS and SMOKE CURERS, for which he has been appointed Agent, and with which he guarantees a cure of the worst chimney.
J. S. is also Agent for THOS. WALKER’S PATENT SELF-FEEDING PHOENIX STOVES, which require Fuel but once a day, and can be used either as Open or Close Stove, still supplying itself with fuel for 12 or 18 hours together, at a cost of One Farthing per Hour.
E. BROWN'S Patent Economical Self-acting ROASTING JACK and UNIVERSAL COOKING APPARATUS, may be seen in action on the Premises.
The great advantages of this invention over every other are these-—its economy, self-acting power, simplicity of construction and management, certain prevention cure of smoky chimney and safety from danger of fire, —it saves from 50 to 70 p. Cent in fuel, —will roast, bake, boil, fry, broil, stew, and steam, and forms a perfect ironing Apparatus.— Particulars on the above will forwarded on application.
The Patent Self-Rolling MANGLE.
ELKINGTON’S ELECTRO PLATED GOODS.
SYLVESTER’S Patent RADIATING STOVES.
DUCE’S Patent SAFES, warranted secure from Fire and Thieves.
DOUBLE and SINGLE GUNS, with Silver, Steel and other Barrels. RIFLES and AIR CANES.
J. C. S. has just received a splendid Assortment of MAGNUM and other CANDLE LAMPS, with Bohemian Glass and Papier Mache Pillars, &c. GEM, VESTA, and SOLAR LAMPS in variety.— An extensive Assortment of Burnished, Berlin, Black, and other REGISTER STOVES, with FENDERS and FIRE IRONS to match.
Houses and Conservatories heated by HOT WATER APPARATUS of the most improved construction.
BRUSHES, MOPS, and BROOMS of every description. GENUINE SPERM, SOLAR, and LINSEED OILS; Wool, Hemp, Sinnott, and Brush MATS ; MATTING ; WRITING DESKS, CARPET BAGS, PORTMANTEAUS, HAT CASES, &c., &c.
The following articles are Let for Hire:
Table and other LAMPS, CHANDELIERS, GUNS, BATHS of every description, TABLE CUTLERY, BAGATELLE BOARDS, PLATE, & LINEN.'[1]

1856 Partnership dissolved. '...the Partnership hitherto subsisting between us the undersigned, John Cowell Stark and William Stark, as Ironmongers, at Torquay, in the county of Devon, has been dissolved by mutual consent...'[2]

1873 'FOR SALE, a CORNISH BOILER, in good condition, with fire door and bars complete, 10ft, long, 3ft, 9in. diameter, 18in. flue.
A STEAM MANGLE or CALENDERING MACHINE, for hand power, rollers 30in. wide, 8in. diameter, nearly new.
A McALPINE'S PATENT WASHING MACHINE, 32ln. pan.
To laundries with steam power the above is as good as new.
— Apply to Stark and Co., Iron Works, Torquay.'[4]

1887 'The extensive building in George-street formerly known as Stark's foundry has been purchased by Shapley and Austin, grocers, of the Strand, and will be used by that firm as stores.'[5]

Stark & Co had a foundry in Swan Street, Torquay, part of which survives as 'Bar SO'.[6]