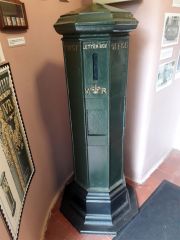 1854 Advert: 'NOTICE is hereby given, that JOHN WORTHY BATTERSHILL, of Dudbridge, in the parish of Stroud, in the county of Gloucester, Ironfounder and Millwright, hath by Indenture of Assignment, bearing date the 25th day of May, 1854, assigned all his estate and effects unto John Michael Butt, of the city of Gloucester, ironfounder, and James Smith, of Brimscombe, in the said county of Gloucester, brewer, upon trust, for the benefit of all the creditors of the said John Worthy Battershill, and that the said indenture is now lying at the office of Mr. William Woodruffe Kearsey, of Stroud aforesaid, solicitor, for the inspection aud execution of the creditors, who are requested forthwith to furnish to the undersigned full particulars all debts aud demands. Dated this 8th day of June, 1854.
W. W. KEARSEY, Solicitor the said Trustees.' [1]

1864 'GLOUCESTER. Accident at Foundry.— Last evening two labourers, named respectively Jesse Davis and George Witts, were carrying a ladle filled with about 2.5 cwt of molten metal, into the casting house, the Kingsholm foundry of Messrs J. W. Butt and Co., when they stumbled and the metal was splashed over them. One was much burnt in the middle part of his body, and the other was scalded upon the foot. They were both taken to the infirmary.'[2]

1917 'SALE OF AN OLD ESTABLISHED FOUNDRY.
For more than three-quarters of a century the firm of Messrs. J. M. Butt and Co., iron founders, has carried on business at the Kingsholm Foundry, Gloucester. Among the best-known in the West of England, the firm has always enjoyed a deservedly high reputation, which has been fully maintained by the present proprietor, Mr. Harley Butt. J.P. The business has now changed hands, the freehold premises, with the exception the warehouse in Market Parade, together with the plant, stock and goodwill, having been purchased by Messrs. Danks, Ltd., of the Westgate Iron Works, Gloucester. It is satisfactory to know that, in spite of the change of ownership, this important Gloucester industry, employing a large number of hands, will still be carried on as heretofore. The sale was negotiated by Messrs. Bruton, Knowles and Co.. Gloucester.'[3]

1930 'AMAZING RAID.
AT KINGSHOLM IRON FOUNDRY.
Huge Mob Take Away Wood.
An amazing raid by a vast army of about 400 women and children on a disused iron foundry at Kingsholm, Gloucester, in search of firewood was brought to light at Gloucester City Petty Sessions before the Mayor (Mr. S. J. Gillett) and other magistrates.
Workmen who were demolishing the Kingsholm Foundry, Sweetbriar-street, had just brought the roof down, when the huge mob of women and children rushed into the building and seized all the wood they could lay their hands on. At the same time they were in great danger, for the walls of the building were rocking.
Two Women Prosecuted.
Arising out of these incursions the premises two women......[4]. The article continued, at great length.