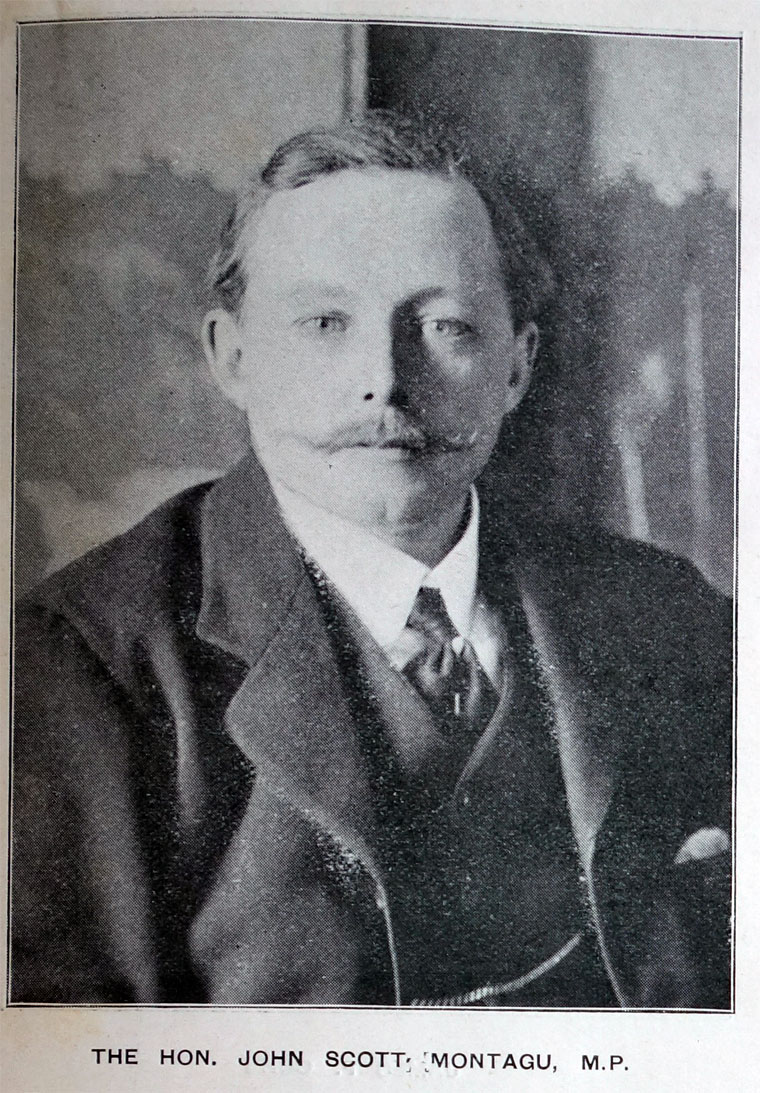 He entered Parliament for New Forest in 1895, a seat he held until 1905, when he succeeded his father in the barony and entered the House of Lords.

During the First World War Montagu was an acting member of the War Aircraft Committee from March to April 1916 and an adviser on Mechanical Transport Services to the Indian government (with the rank of Honorary Brigadier-General).

He is chiefly remembered as a promoter of motoring and was the founder and editor of the Car Illustrated magazine and a member of the Road Board.

He married secondly Alice Pearl, daughter of Major Edward Barrington Crake, in 1920. There were children from both marriages.

1900 Article regarding the British Automobile Industry.[1]

Lord Montagu of Beaulieu died in March 1929, aged 62, and was succeeded in the barony by his only son, Edward. Lady Montagu Thornton of Beaulieu later remarried and died in April 1996, aged 101.

During his first marriage Beaulieu had a child by his mistress and secretary Eleanor Thornton. Wanting an appropriate mascot for his Rolls, and using Eleanor Velasco Thornton as a model, the sculptor Charles S. Sykes was commissioned to design the precursor (called "The Whisper") of the "Spirit of Ecstasy"; the famous winged mascot that has adorned nearly every Rolls Royce car since 1911.

On 30 December 1915, Thornton was drowned with hundreds of other passengers when the SS Persia, on which she was travelling with Beaulieu through the Mediterranean on the way to India, was torpedoed without warning off Crete by the German U-boat U-38, commanded by Max Valentiner.

MONTAGU, THE HON. JOHN SCOTT, M.P.- Born June 10th, 1866, educated at Eton and New College, Oxford, Mr. Montagu is the eldest son of the first Lord Montagu of Beaulieu, and grandson of the fifth Duke of Buccleuch. His principal pursuits and pastimes are shooting, fishing, yachting, cycling, rowing, and music. Mr. Montagu has travelled very extensively throughout the world, has acted as Times correspondent during the Matabele War. He is a Major of the 4th Hants Volunteer Battalion since 1892, the Conservative representative of the New Forest division of Hants, and largely interested in railway and financial enterprises. He is Vice-president of this Club, and is looked upon as the most enthusiastic automobilist in the House of Commons. To the removal of all automobile restrictions his particular attention is devoted; as founder, proprietor, and editor of The Car the society paper of automobilism, he depicts weekly therein all that the beauty of Nature or art can offer to the traveller on his wanderings. The Bill to legalise the coming Gordon Bennett Race in the Emerald Isle has been confined to his care, and at the time these lines are going to press it is hoped will reach its second reading. Mr. Montagu is a Vice-chairman of the Club, and has taken part in all the important events organised by it.

Brig.-General Lord MONTAGU OF BEAULIEU, K.C.I.E., C.S.I., V.D., who will long be remembered as a pioneer motorist, became an Associate of the Institution in 1916, and was transferred to Companionship when the new class was instituted in 1922.

He was trained in the London and South Western Railway shops at Nine Elms, and his early association with railway work enabled him to view the transport problems of to-day with good judgment.

Lord Montagu was Member of Parliament for the New Forest division of Hants from 1892 to 1905, when he succeeded his father in the peerage, and he made full use of his influence in both Houses of Parliament to further road development and aviation.

His special interest in the Institution was shown at the Summer Meeting at Southampton in 1928, when he welcomed a party of members to Beaulieu Abbey, and it is also of interest to record that he contributed a Paper to the Institution on "Mechanical Vehicles and Road Surfaces" in 1922, at the Paris Summer Meeting.

Lord Montagu held a commission in the Hants Regiment for many years and commanded the 2/7th Battalion in 1914, when on mobilization he proceeded to the Eastern theatre of the War and rose to Brigade command.

On his return for a second time the P. and 0. liner "Persia" in which he was travelling was torpedoed in the Mediterranean and Lord Montagu was rescued after spending thirty-two hours in the water and all hope had been abandoned. He was one of the very few who have read their own obituary notice in the press.

As adviser to the Government of India on mechanical transport services, his experience was of such value that his services were recognized by the award of the C.S.I. in 1916 and of the three years later.

At the end of the War he was placed on the Reserve of Officers with the rank of Brig.-General. Lord Montagu was a member of the Road Board from 1910 to 1919, when he became chairman of the Joint Roads Committee which had been set up by the War Office, with representatives from the various Government departments and the highway authorities, to deal with claims and questions arising out of war damage.

He was keenly interested in journalism and founded a motoring paper as well as contributing many articles to The Times, of which he was a member of the stall from 1905 to 1912. Lord Montagu was a Verderer of the New Forest and a keen sportsman in its widest sense.