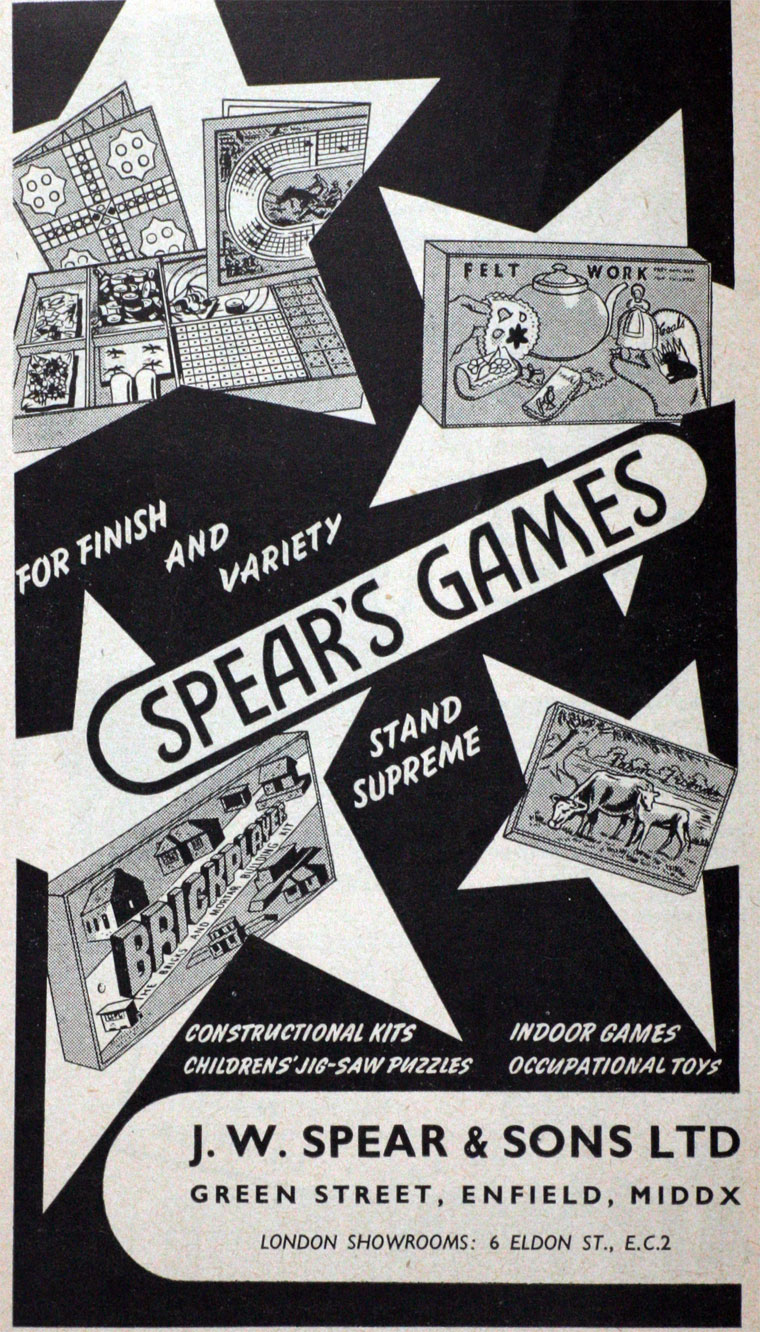 The German part of the company started off in an old mirror factory and later, in 1883, Spear moved to a Villa and built a new factory behind the villa where he had 60 workers producing goods, mainly for export to England. His workers turned printed and painted paper and card into games, picture albums, small picture books and place mats. This work was all done on hand presses and some were varnished with spirit lacquer.

1884 Ralph and Joseph Spear became partners and the company became J. W. Spear and Sons. Ralph and Joseph left the following year to set up their own company Gebrüder Spear meaning Spear Brothers.

1887 The first advert for J. W. Spear appeared in a toy industry guide in April, using their first trade mark, which was an English pillar box with the words UK Victoria Regina on the front. The advert offered a range of stationary, fancy goods and toys.

1888 The German factory was expanded and modernised. Hand operated machines were exchanged for steam powered machines. Spear also introduced a new process using oil which involved card being cut, pressed and formed, soaked in raw or boiled linseed oil before being baked in a drying oven on racks at 100°C. The card would then be painted or varnished and dried once more in a drying room.

1889 Carl and Wilhelm Spear became partners with their father.

1892 A major fire broke out at the German factory, causing extensive damage to the building and destroying stock. Realising that they were not properly insured J. W. Spears and Sons faced severe financial difficulties. But through hard work and determination they soon had a new, bigger and better factory up and running.

1893 A second fire occurred in the factory but was extinguished quickly, before much damage was caused. This second incident caused local residents to petition against the factory as they believed that it was dangerous and did not like the bad smell of production during the summer months. Authorities refused to close down the factory and this caused a period of unrest for the Spear family business. J. W. Spear was accused of setting fire to his own factory and was later remanded on bail. On the 3 September, he hung himself in the factory.

1894 Jacob's widow, Sophie, became a partner in the business.

1898 J. W. Spear and Sons purchased three and a half acres of land outside Nuremberg in Germany. The original factory was connected to both Nuremberg and Fürth by the first section of the German national railway. This new site was an industrial area with space for expansion and no residents to worry about. Later in the year Eugen Mayor, an owner of a large printing company, became a partner and the company was converted into a limited partnership.

1899 Production at the new factory in Nuremberg started. With the printing equipment from Mayor's printing company, large runs of good quality print were produced inexpensively. Production was divided into two sections; toys and card fancy goods.

1932 Production was moved back to a factory in England due to the Nazi rise in Germany. The Nuremberg factory continued to produce toys and cards until it was bombed during World War II.

1953 J. W. Spear and Sons launched the popular game Scrabble in the UK.

1968 The company acquired the rights to sell the game in other countries excluding the USA and Canada.