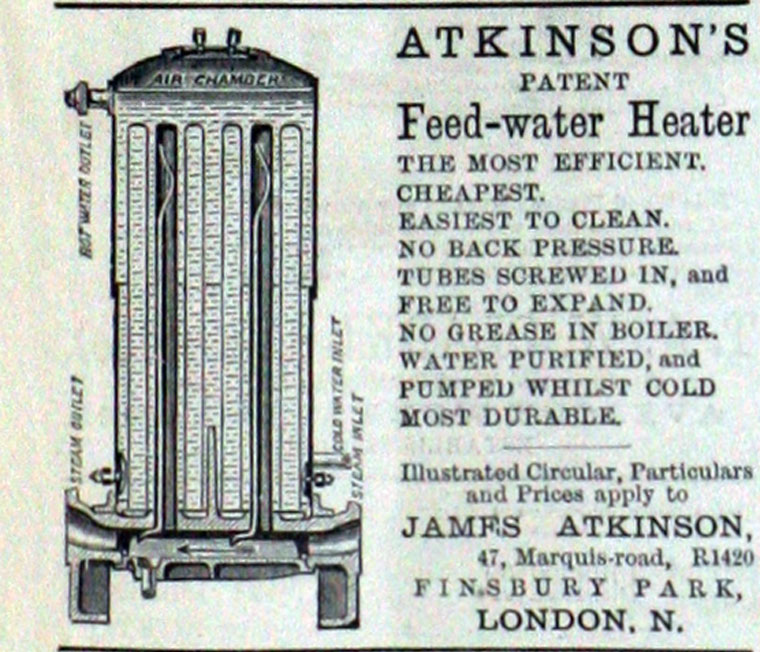 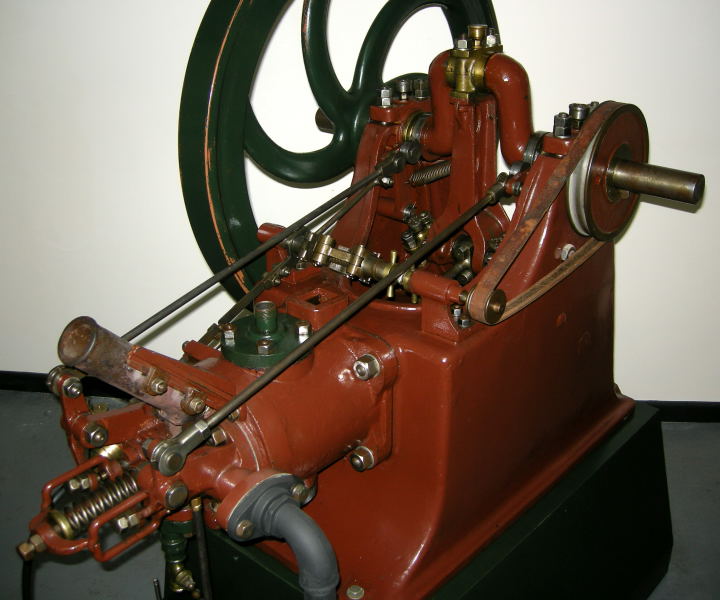 1874 Married Emily Grimer in Islington; his father, Joseph Atkinson (deceased), was a manager of works[3]

1885 Introduced the Atkinson 'Differential Engine', which had opposed pistons and gave a power impulse on each revolution, and an expansion stroke double that of the induction stroke.

1886 Invented the Atkinson Cycle engine. By the use of a two-bar linkage between the connecting rod and the crank, four unequal strokes were obtained per crankshaft revolution, enabling Atkinson to increase the efficiency of his engine over traditional Otto-cycle engines. The British Gas Engine and Engineering Co built over 1000 examples between 1886 and 1893 when production ended. Others were produced by Manlove, Alliott and Co and the Warden Manufacturing Co of Philadelphia.[5]

1893 When the British Gas Engine Co closed he went to work for Crossley Brothers as Chief Engineer, where he remained until 1912.

JAMES ATKINSON was born near Bolton on 31st October 1846. He came of an engineering family, his grandfather being the proprietor of the Hope Foundry, Bolton, which firm was among the very earliest makers of locomotives in Lancashire.

His apprenticeship was served with Messrs. Palmer Brothers, of Jarrow-on-Tyne, and later he went to the London and North Western Railway Works at Crewe, where he was a draughtsman, remaining there for three years.

He was afterwards again on the Tyne, engaged in marine engineering with the firm of Messrs. Pattison and Atkinson, the latter being his elder brother.

Subsequently he was with the National Boiler Insurance Co., of Manchester, the connexion lasting for eight years.

In 1877 Mr. Atkinson commenced business on his own account as a consulting engineer, and became later marine superintendent engineer for Mr. George Palmer's steamships.

About the year 1882 he interested himself in gas-engines, and from that year he devoted himself mainly to this branch of engineering.

In 1883 the British Gas Engine and Engineering Company, Ltd., was founded, Mr. Atkinson being appointed managing director. In this position he brought out a number of very successful inventions, among which may be mentioned his "Differential " Engine, which obtained the gold medal at the Inventions Exhibition in 1885, and his "Cycle" Engine which was awarded the gold medal of the Society of Arts at the competitive trials of 1888.

In this year, also, he took a "Cycle" engine to America, and submitted it for trial to the scientific committee of the Franklin Institute of Philadelphia, who were so satisfied with its performance that they awarded him the John Scott Legacy Medal and Premium, this being the first time this honour had been awarded to any but an American.

A later engine of his invention was the "Utilite" engine in about the year 1892. Engines of this type were made to run up to a speed of 600 revolutions per minute with an impulse every revolution which was an exceptional performance for those days.

Other early inventions of Mr. Atkinson, apart from gas-engines, were his high-speed air-compressor, a pneumatic duplex pumping arrangement, and a feed-water heater which commanded a large sale.

In the year 1893 he went to Messrs. Crossley Brothers, Manchester, as their chief engineer, and in conjunction with this firm introduced a very large number of improvements and inventions in connexion with gas and oil engines. In the latter years of his service with Messrs. Crossley Brothers he held a position as their consulting engineer, retiring from business in 1912.

He contributed a Paper to this Institution on "The Governing and the Regularity of Gas-Engines."

His death took place at his residence at Thames Ditton, Surrey, on 24th March 1914, at the age of sixty-seven.

He was elected a Member of this Institution in 1892.