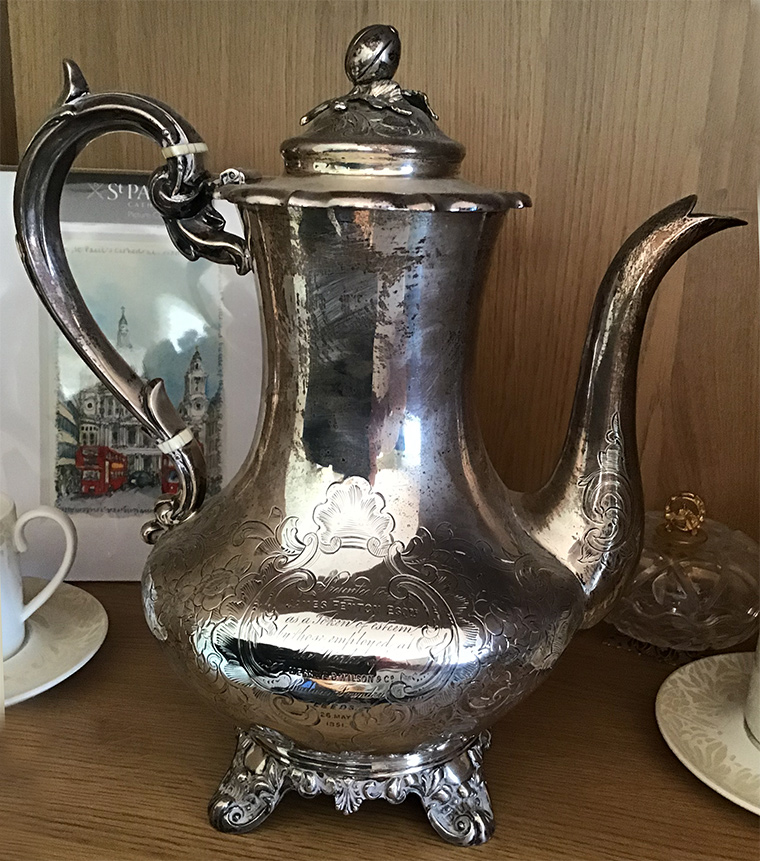 1851. Silver Teapot inscribed 'Presented to James Fenton as a token of esteem by those employed at the works of Messrs E. B. Wilson and Co railway foundry Leeds 26th May 1851.' Details of presentation [1]

Apprenticed at the works of James Cook and Co, Glasgow, as a mechanical Engineer, and under Mr. Blackadder as a Civil Engineer

1837 Joined Brunel in construction of the Great Western Railway

1845 Became Acting Engineer of the Leeds and Thirsk Railway

1846 After 18 months, and prior to the completion of the construction, he entered into an arrangement with the proprietors of the Railway Foundry, at Leeds to take over the business which was, for a while, Fenton, Craven and Co. By the end of the year, the partnership with Craven had ended and Fenton continued on his own.

1846 November. A number of partnerships were dissolved between James Bray and James Fenton, as Engineers and Brass and Iron Founders, at the Railway Foundry, in Hunslet, Leeds, and elsewhere, under the respective styles or firms of Edward Brown Wilson and Company, Fenton, Craven, and Company, and Fenton and Company[2] [3]

1850 Resigned from the Inst of Mech Engineers

1852 of Low Moor Ironworks; re-elected as a member of the Inst Mech Engineers

James Fenton was born at Dunkenny, Forfarshire, on the 29th of August, 1815, and after serving an apprenticeship at the works of James Cook and Co, Glasgow, as a mechanical Engineer, and under Mr. Blackadder (M. Inst. C.E.) as a Civil Engineer, he, in June, 1837, received an appointment under Mr. I. K. Brunel (M. Inst. C.E.), on the Great Western Railway, which was then in course of construction.

In 1841, he became the resident Engineer and Locomotive Superintendent of the Manchester and Leeds line, where he remained for nearly five years, and on retiring he was presented by the workmen with a handsome silver vase and drinking-cup, and by the two engine-drivers on the Halifax branch with a silver snuff-box.

In 1845, he undertook the position of Acting Engineer of the Leeds and Thirsk Railway, for which the Bill had just been obtained; but after remaining in the service of that Company for about eighteen months, and previous to the completion of the works, he entered into an arrangement with the proprietors of the Railway Foundry, at Leeds, then becoming known as builders of locomotive engines.

Among the various works he executed while in that position may be specially mentioned the 'Jenny Lind' class of engine, designed with the view of combining simplicity of construction, with steadiness when running at high speeds. So highly were these engines thought of on some lines, that they were adopted as the type for all passenger engines, until by increase in the traffic heavier engines were required.

Mr. Fenton also, whilst at the Railway Foundry, constructed and launched one of the largest landing-stages in the kingdom, that at New Holland, where the passengers by the Manchester and Sheffield Railway cross to Hull.

On leaving the Railway Foundry in 1851 he joined the Low Moor Company, as consulting Engineer, a position which he retained to his death; and there he had ample opportunity of meeting all the Engineers of reputation, and this soon brought him a large practice. As a witness he had considerable facility for explaining mechanical details in a popular manner.

His last professional engagement was from the War Office, having been appointed to settle the question of compensation to the Elswick Ordnance Company. During the attendance on this business in London, he caught a severe cold, which hastened his end.

He died at Leamington, where he had for some time resided for the benefit of his health, on the 22nd of April, 1863, at the early age of 47 years. His remains were conveyed to Low Moor, where they were interred on Monday, the 27th of April, and were followed to the grave by the principals and staff of the Low Moor Iron Company, together with a large number of the leading railway Engineers, and of his friends from various parts of the country. Mr. Fenton's loss will be much felt by many young Engineers, as he was always ready with his advice and assistance, and he was deservedly beloved and respected.

Mr. Fenton was elected a Member of the Institution of Civil Engineers in 1849, and he contributed to the Proceedings a "Description of an Improved Form of Safety-Valve, for Steam Boilers."

He was one of the originators of the Institution of Mechanical Engineers, of Birmingham, in 1847, in the management of which he took a very active part, and he was for five or six years one of the Vice-Presidents of that Institution.

James Fenton was born at Dunkenny in Forfarshire on 29th August 1815; and after leaving the Glasgow University was apprenticed as a mechanical engineer to Messrs. James Cook and Co. of Glasgow, and afterwards as a civil engineer to Mr. Blackadder of Glamis.

His first appointment was under Mr. Brunel on the Great Western Railway at its formation in June 1837; after which he was appointed resident engineer and locomotive superintendent on the Manchester and Leeds Railway in 1841.

In 1845 he became acting engineer of the Leeds and Thirsk Railway, for which the bill had just been obtained ; but previous to the completion of the line he undertook in 1846 the management of the Railway Foundry, Leeds, where the well-known "Jenny Lind" class of locomotive engines were built from his designs: a class of engine which, on account of its simplicity of construction combined with its steadiness at a high speed, was extensively adopted for passenger engines.

He also constructed and launched the large landing stage at New Holland for the steamboat ferry across the Humber to Hull.

In 1851 he was appointed consulting engineer to the Low Moor Iron Company, a position which he retained to his death. He was elected a Member of the Institution in 1847, the year of its commencement, and took a very active part in promoting its interests; he was elected a Vice-President of the Institution in 1857 and re-elected in each year subsequent.

He died on 22nd April 1863, in the forty-eighth year of his age, at Leamington, where he had for some time resided for the benefit of his health.

The History of Railways in Britain by Frank Ferneyhough. Pub 1975.