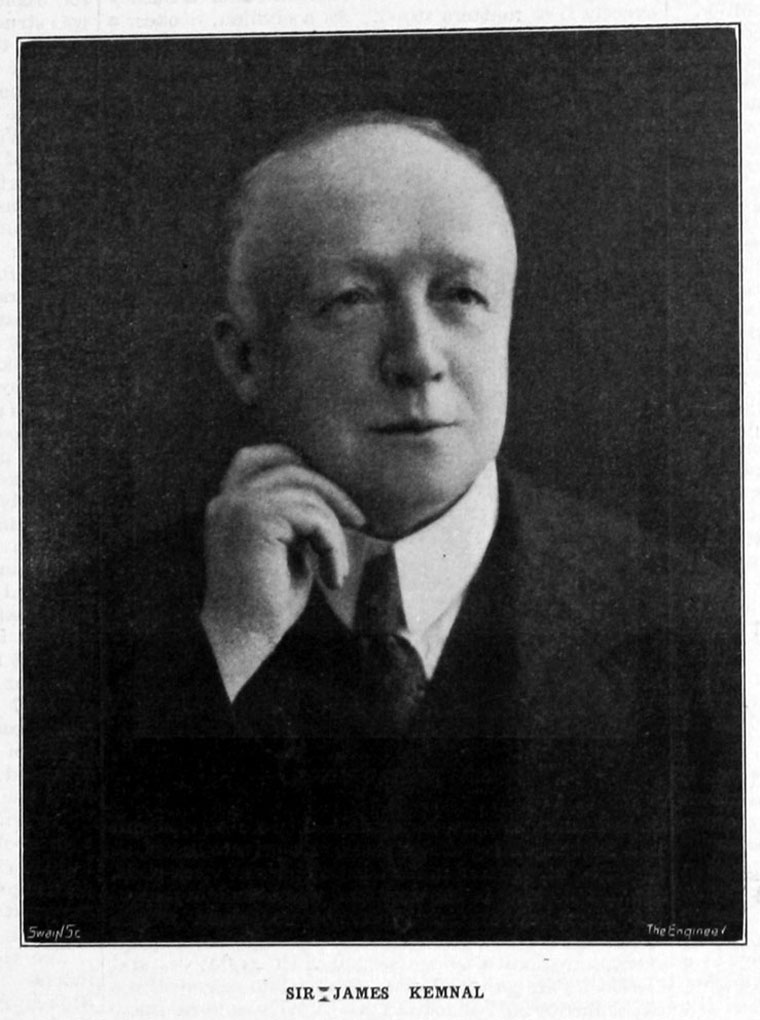 1883 Joined Babcock and Wilcox as Manager.

1920 Knighted for services during the Great War.

Sir JAMES HERMANN ROSENTHAL KEMNAL, F.R.S.E., managing director of Messrs. Babcock and Wilcox, was associated with the development of the Company since the days when it was a branch of the Babcock and Wilcox Company of New York.

Sir James, who was known as Mr. James Rosenthal in his earlier days, received his education in London and at Cologne University.

He was apprenticed at the works of the Belgian State Railways, and afterwards was appointed to the engineering staff of the Anderston Foundry Company, Glasgow.

Mr. Rosenthal joined the London office of Messrs. Babcock and Wilcox in 1883 as manager, and with the establishment of the British firm in 1891 he became joint managing director with Mr. Charles A. Knight, the original English representative.

Sir James received the honour of knighthood in 1920 for the services rendered by himself and his firm during the War.

At an early stage of his career he interested himself particularly in the adaptation of the water-tube boiler to marine purposes and in 1896 supplied a set of boilers to the British Navy for the gunboat "Sheldrake," at the time when there was acute discussion on the subject of water-tube boilers for naval service.

Sir James, who was the author of several papers on steam generation and a warm supporter of increased steam pressures, became a Member of the Institution in 1889.

His death occurred on 8th February 1927, at the age of sixty-three years.

Under his management the firm's growth was such that its capital of one-quarter million pounds in 1890 had increased to four and a half millions at the time of his death. Sir James Kemnal was also the director of several other companies, including most of the subsidiary companies associated with Messrs. Babcock and Wilcox.

He was also a Member of the Institution of Naval Architects and was a Justice of the Peace for the city of Glasgow.

SIR JAMES H. R. KEMNAL, well known throughout the world as managing director of Messrs. Babcock and Wilcox, Ltd., died somewhat suddenly on the 8th February, 1927, in his sixty-third year.

He was first educated in London, and later proceeded to Cologne University, afterwards entering the works of the Belgian State Railways as an apprentice.

On completing his apprenticeship he joined the engineering staff of the Anderson Foundry Co., Ltd., and whilst there became acquainted, in 1881, with Mr. Charles A. Knight, who was then establishing a British branch of the Babcock and Wilcox Co. of New York, U.S.A., of which branch Mr. Rosenthal was appointed manager in 1883. The rapid progress made, and the amount of business transacted, were such as to justify the formation in 1891 of a separate British company of which he became managing director, conjointly with Mr. Knight.

Works were established at Renfrew and employment was found for some 130 men.

In 1900 the company was reconstructed, with increased capital, under the title of Babcock and Wilcox, Ltd., with Mr. Rosenthal as managing director.

Throughout the War his personal energies and the manufacturing resources of the company were practically devoted to meeting national needs, and in 1920 he received the honour of knighthood for the services which he, and the company, had rendered. He also served as president of the British and Latin American Chamber of Commerce, and in all these capacities displayed a master mind and was successful in securing the most loyal and active assistance of all associated with him in his various activities.

In addition to being a member of various technical institutions, he was a Fellow of the Royal Society, Edinburgh, a liveryman of the Worshipful Company of Shipwrights, a Freeman of the City of London, a Justice of the Peace for the City of Glasgow, and, had he lived, the LL.D. Degree would have been bestowed upon him by the Glasgow University. During the past 40 years he was most closely identified with the development of steam-generating plant for electric power stations, the Navy, and the Mercantile Marine, and he contributed valuable papers to several of the Institutions and the first World Power Conference.

Sir James Kemnal was intimately associated with the growth and development of the Babcock Company, which, in the first instance, was a branch of the Babcock & Wilcox Company of New York, on whose behalf Mr. Charles A. Knight came over to England to make the commencement in 1881, and Mr. Knight still remains an active director of the Babcock organization. The progress of the branch, however, justified the institution in 1891 of a British company for the purpose of carrying on the business.

In 1891 Sir James Kemnal became the managing director of the company conjointly with Mr. Knight, and in 1900, owing to the success of the company, an increase in capital became necessary, and Babcock & Wilcox, Ltd., was reconstituted to suit these conditions, with Sir James Kemnal as managing director. Since that date the success of the company has been phenomenal, and the original capital in 1890 of £240,000 is now £4,500,000 and as an indication of the soundness of the manner in which the business was conducted during the recent much-to-be-regretted coal strike this was one of the few engineering companies able to continue operations without suffering severe loss and without material reduction of output.

Sir James Kemnal was one of the pioneers in the development of electrical power, in consequence of the adaptability of the Babcock productions for this particular branch of trade. For services rendered to the nation during the war he received the honour of knighthood in 1920. He was a director of the following: all the foreign Babcock companies Power Securities Corporation Balfour, Beatty & Co., Ltd. Power and. Traction Finance Co. (Poland), Ltd. and Chairman of Messrs. Worthington-Simpson, Ltd. He was also President of the British and Latin American Chamber of Commerce.

He was a member of the Institution of Mechanical Engineers, Institution of Naval Architects, Institution of Electrical Engineers, and other Societies, and also a Fellow of the Royal Society of Edinburgh, and recently was appointed a Justice of the Peace of the City of Glasgow, and if he had lived the honour of LL.D., Glasgow, would have been conferred on him. He was a Liveryman of the Shipwrights Company, and a Freeman of the City of London. Sir James controlled, as management director of the Board, factories at Renfrew, Dumbarton, Oldbury, Lincoln, Sydney (Australia), and Yokohama (Japan), altogether with some 10,000 employees.

In addition, he was a director of most of the subsidiary companies in France, Germany, Spain, Italy, and Canada. In all these activities, he displayed a master mind in securing the assistance of those most loyal and active in the interests of the great concern he was himself able to create. His business capacity, ability, and power of application were well recognized in financial, engineering, and commercial circles. He was unfortunately taken seriously ill in September 1926, and was not able to give full attention to business for the last five months of his life. His death will be mourned by a very large circle of friends and associates.

Sir James Kemnal was elected a Member of the Institute on October 14, 1909.

Born in London, he received his early education in that city, and studied later at Cologne University. He was apprenticed at the works of the Belgian State Railways, after which he was appointed to the engineering staff of the Anderston Foundry Company, Ltd., Glasgow.

In 1883 Sir James joined the British office of the Babcock and Wilcox Company of New York as manager. In 1891 a British company was formed to carry on the ever-growing business; works were established at Renfrew, with Sir James as managing director conjointly with a Mr. Knight, with whom he had been associated previously.

In 1900 the business of the firm was reconstituted with increased capital under the style of Babcock and Wilcox, Ltd., with Sir James as the managing director. The firm was early associated with the utilisation of higher pressure boilers, and at length proceeded with the construction of boilers and steam pipes designed for pressures of 500 lb. per sq. in.

In 1920 Sir James received the honour of knighthood for the services rendered by him and his firm during the war. He was a Liveryman of the Worshipful Company of Shipwrights and a Freeman of the City of London. He was a member of several kindred societies, and was the author of several important papers.

He was elected a member of the Iron and Steel Institute in 1906.

The death of Sir James Kemnal, which occurred at Sandbanks, Dorset, on Tuesday last, after an illness lasting several months, removes an engineer who was known throughout the world in the sphere of boiler construction. Sir James, who was born in London in 1864, was associated with Messrs. Babcock and Wilcox, Limited, for the greater part of his life, and had occupied the position of managing director of the company for many years. The firm was originally a branch of the Babcock and Wilcox Company of New York, LLS.A., and, on behalf of that company, Mr. C. A. Knight came to England in 1881. The growth of the English branch was so rapid that, ten years later, a British company was formed, and Sir James Kemnal became managing director of the new firm, conjointly with Mr. Knight. The British concern continued to make rapid progress and, in 1900, the company was entirely reconstituted, and Sir James was appointed managing director, a position which he occupied until his death. In this capacity he had control of factories at Renfrew, Dumbarton, Oldbury, Lincoln, Sydney, and Yokohama, the combined personnel of which totals 10,000. Sir James was also a director of the French, Spanish, Italian, and German companies of Messrs. Babcock and Wilcox, of Messrs. Power Securities Corporation, London, of Messrs. Balfour, Beatty and Co., Limited, London, and of other companies. He was also Chairman of Messrs. Worthington-Simpson, Limited, London, and Newark, and President of the British and Latin-America Chamber of Commerce.