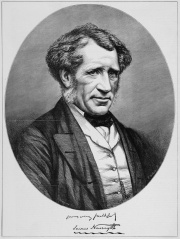 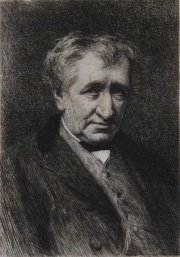 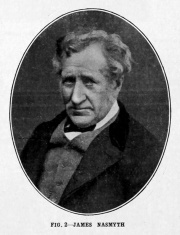 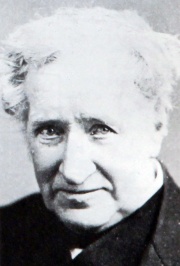 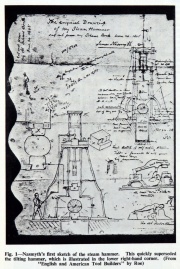 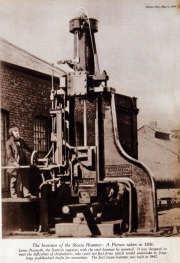 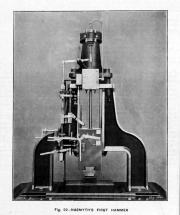 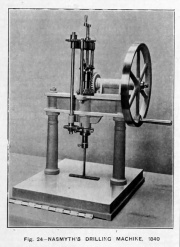 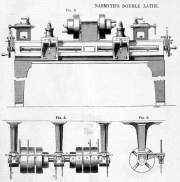 His sketch of his works, republished in 1920. 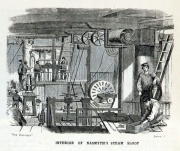 Interior of his steam sloop, republished in 1920. 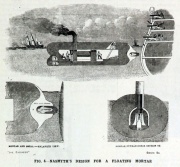 Nasmyth's design for a floating mortar, republished in 1920.

Nasmyth's Sketch of the Rocket, republished in 1930.

James Hall Nasmyth (1808–1890) of Nasmyth, Gaskell and Co and J. Nasmyth and Co was a Scottish engineer, inventor and entrepreneur, famous for his development of the steam hammer in 1839.

1808 August 19th. Born in Edinburgh the son of Alexander Nasmyth (1758-1840), a landscape painter and his wife Barbara Foulis. He was the tenth of eleven children. His older brother George Nasmyth also became an engineer

One of Alexander's hobbies was mechanics and he employed nearly all his spare time in his workshop where he encouraged his youngest son to work with him in all sorts of materials.

James was sent to the High School where he had as a friend Jemmy Patterson, the son of a local iron founder. Being already interested in mechanics he spent much of his time at the foundry and there he gradually learned to work and turn in wood, brass, iron, and steel.

1820 He left the High School and again made great use of his father's workshop where at the age of 17, he made his first steam engine.

1828 James made a complete steam carriage that was capable of running a mile carrying 8 passengers. This accomplishment increased his desire to become a mechanical engineer. He had heard of the fame of Henry Maudslay's workshop and resolved to get employment there. With this object in view he drew out and carefully constructed a small steam engine, every bit of which was hand made.

1829 Went to London and called on Maudslay, taking his drawings and steam engine with him, and as a result Maudslay appointed him his own private workman at 10 shillings a week. Maudslay died two years later, and Nasmyth was taken on by Maudslay's partner Joshua Field as a draughtsman.

1831 When Nasmyth was 23 years old he decided to set up in business on his own and returned to Edinburgh.

1834 He eventually decided to move to Mnachester, and rented premises in Dale Street. He letter settled in Patricroft, Lancashire, a few miles west of Manchester.

In August 1836, the Bridgewater Foundry was opened after he formed a partnership with Holbrook Gaskell and his brother George.

1839 Claimed to have invented the steam hammer. [1]. However, see 'The Steam Hammer, and other Controversies' below.

1840 In the summer Nasmyth married Anne Hartop, the daughter of an ironworks manager in Barnsley, and at about the same time he began to receive orders from the newly-opened railways which were beginning to cover the country, for locomotives. His connection with the Great Western Railway, whose famous steamship SS Great Western had been so successful in voyaging between Bristol and New York, led to him being asked to make some machine tools of unusual size and power which were required for the construction of the engines of their next and bigger ship SS Great Britain.

When even the largest hammer tilt or trip hammer was tilted to its full height its range was so small that if a really large piece of work were placed on the anvil, the hammer had little room to fall. Faced with this dilemma the constructional engineer, Francis Humphrys, wrote to Nasmyth. Nasmyth thought the matter over and seeing the obvious defects of the tilt-hammer, that a small object was struck a heavy blow while a large object, which required a much heavier blow, received only a light one, sketched out his idea for a steam hammer.

1840 April. Nasmyth visited France with a view to supplying the French arsenals and dockyards with tools and while he was there took the opportunity to visit the Creusot Works. On going round the works, he claimed to have found his own steam-hammer at work. On his return to England, Nasmyth immediately patented the hammer and began manufacture (see J. Nasmyth and Co). The first hammers were of the free-fall type but they were later modified, given power-assisted fall. Its advantages soon became so obvious that before long Nasmyth hammers were to be found in all the large workshops all over the country.

Among his many inventions was a means of transmitting rotary motion by means of a flexible shaft made of coiled wire, and a machine for cutting keys grooves, also self-adjusting bearings, a steam ram and a hydraulic press. He also invented the screw ladle for moving molten metal which could safely and efficiently be tilted by one man.

1855 'Failure of Nasmyth's Monster Gun.— We regret to learn that Mr. Nasmyth’s wrought-iron gun has proved a complete failure, and this not on account of the mechanical difficulties which had to encountered — formidable as they were — but from a most unexpected peculiarity in the material employed, when brought together in so large a mass as was necessary for Mr. Nasmyth's purpose. It seems that wrought iron, so tractable under all ordinary conditions of working, cannot be welded together in very large masses, without undergoing a change in its molecular arrangement, exceedingly injurious to its tenacity. As we understand the explanation which we have received on this point, an immense mass of iron like that which Mr. Nasmyth has welded together continues so long in incandescent and soft state that a process analogous to crystallisation takes place within its substance, whereby the fibrous texture, from which it derives its tenacity is destroyed, and it becomes even less capable than cast iron of resisting the explosion of a heavy charge of gunpowder. We understand that in addition to the unfavourable result obtained by Mr. Nasmyth at Patricroft, another experiment of a similar nature, made under the direction of government has proved a complete failure from the peculiarity in the material to which we have alluded; and a large gun which had been completed was found utterly unfit for use. Indeed, we believe it burst into many pieces on the first trial. Mr. Nasmyth’s experiment has consequently been abandoned. Manchester Guardian.'[3]

1856 Patent to James Nasmyth, of Patricroft, near Manchester, Engineer, and Herbert Minton, of Stoke- upon-Trent, China Manufacturer, for the invention of "certain improvements in machinery or apparatus employed in manufacturing tiles, bricks, and other articles from pulverized clay.[4]

1856 He retired from business when he was 48 years old, for as he said "I have now enough of this world's goods: let younger men have their chance". He settled down in Kent where he happily pursued his various hobbies including astronomy. He built his own 20-inch reflecting telescope and made detailed observations of the Moon. He co-wrote The Moon : Considered as a Planet, a World, and a Satellite with James Carpenter (1840–1899). This book contains an interesting series of "lunar" photographs: because photography was not yet advanced enough to take actual pictures of the Moon, Nasmyth built plaster models based on his visual observations of the Moon and then photographed the models. A crater on the Moon is named after him.

1890 Article on his inventions in 'The Engineer'.

History of Nasmyth Wilson and Co

From 'Short Histories of Famous Firms' by Ernest Leopold Ahrons The Engineer - 1920/03/19.

The Bridgewater Foundry at Patricroft, near Manchester, had its origin in an old mill in Dale-street, Manchester, in the year 1834, when James Nasmyth, who was then twenty-six years of age, started in business on his own account as a machine tool maker and mechanical engineer. Readers of Smiles’ “Lives of the Engineers” will remember that James Nasmyth was the son of a talented Scottish landscape painter, and that the artistic tastes of the latter were inherited by the son to a very marked degree; so much so that had the latter not adopted engineering as a profession he would probably have made a considerable reputation in the world of art.

James Nasmyth’s skill in draughtsmanship was of a high order and proved of much service to him in applying to paper the numerous original mechanical ideas which came from his fertile brain.

The Steam Hammer, and other Controversies

No study of the life and work of James Nasmyth and of the Bridgewater Foundry can be considered complete without reference to the excellent 'James Nasmyth and the Bridgewater Foundry' by Dr. J. A. Cantrell, published in 1985 [7]. This is a thorough, scholarly work, supported by numerous references and footnotes, and provides a valuable source of information on the engineering industry during the period covered. It critically examines some of the important claims and omissions in Nasmyth's autobiography. A full chapter is devoted to Nasmyth's claims regarding the invention of the steam hammer. This topic was also examined by Dr Cantrell in a paper to the Newcomen Society [8]. Although Nasmyth and his associates (Robert Wilson in particular) were responsible for successfully developing and commercially exploiting the steam hammer, claims that 'Nasmyth invented the steam hammer' are exaggerated and should be avoided. Not only do they overstate Nasmyth's role, they dismiss the contribution of others, particularly François Bourdon and Robert Wilson.

There are other claims and ommissions in Nasmyth's autobiography which have had a distorting effect on our knowledge of industrial history. For example, he makes no mention of the role of his brother, George Nasmyth in the early success of Nasmyth's Manchester business. As another example, he attempted to deprive Joseph Whitworth of the credit for successfully producing true plane surfaces.