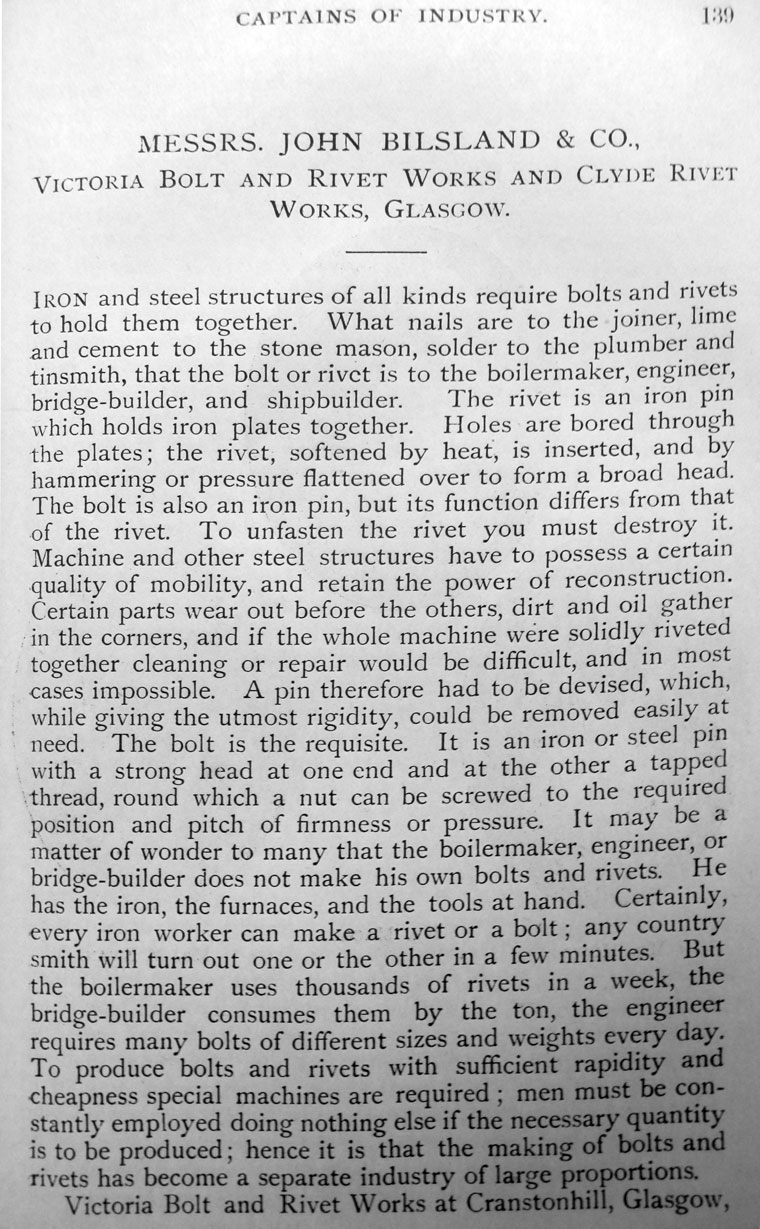 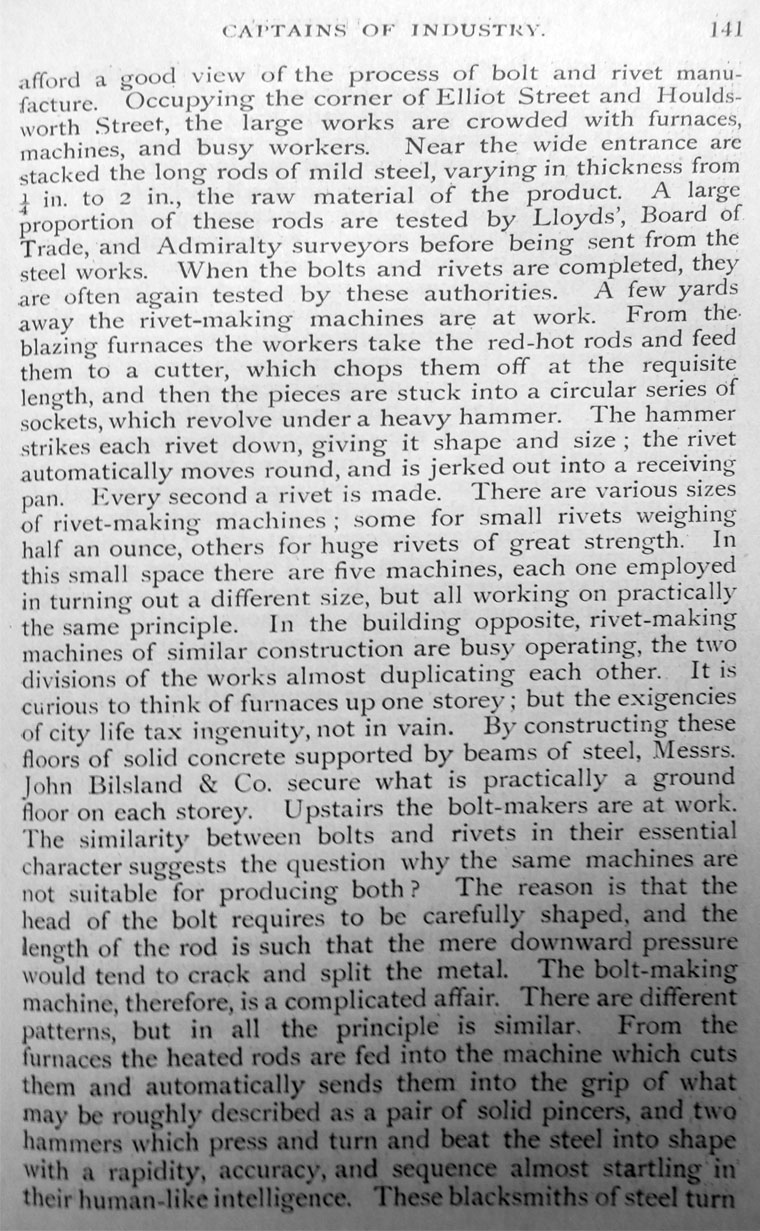 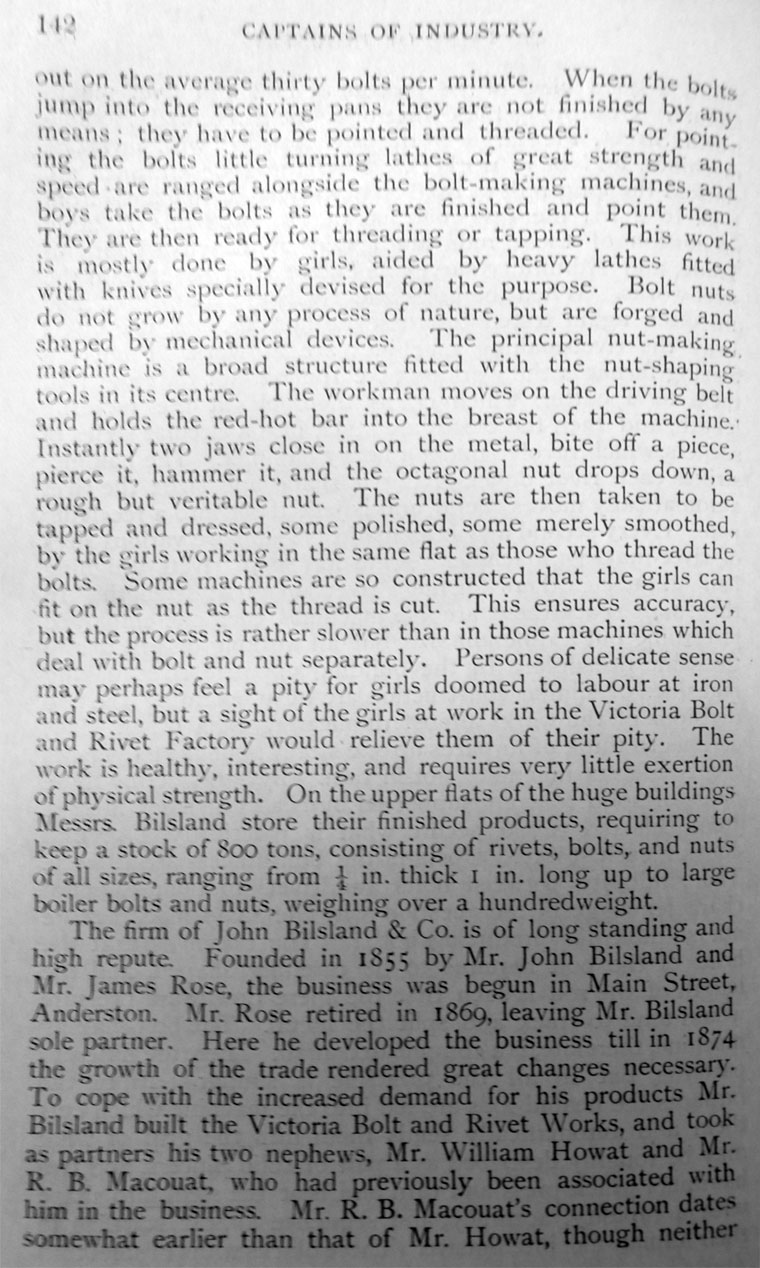 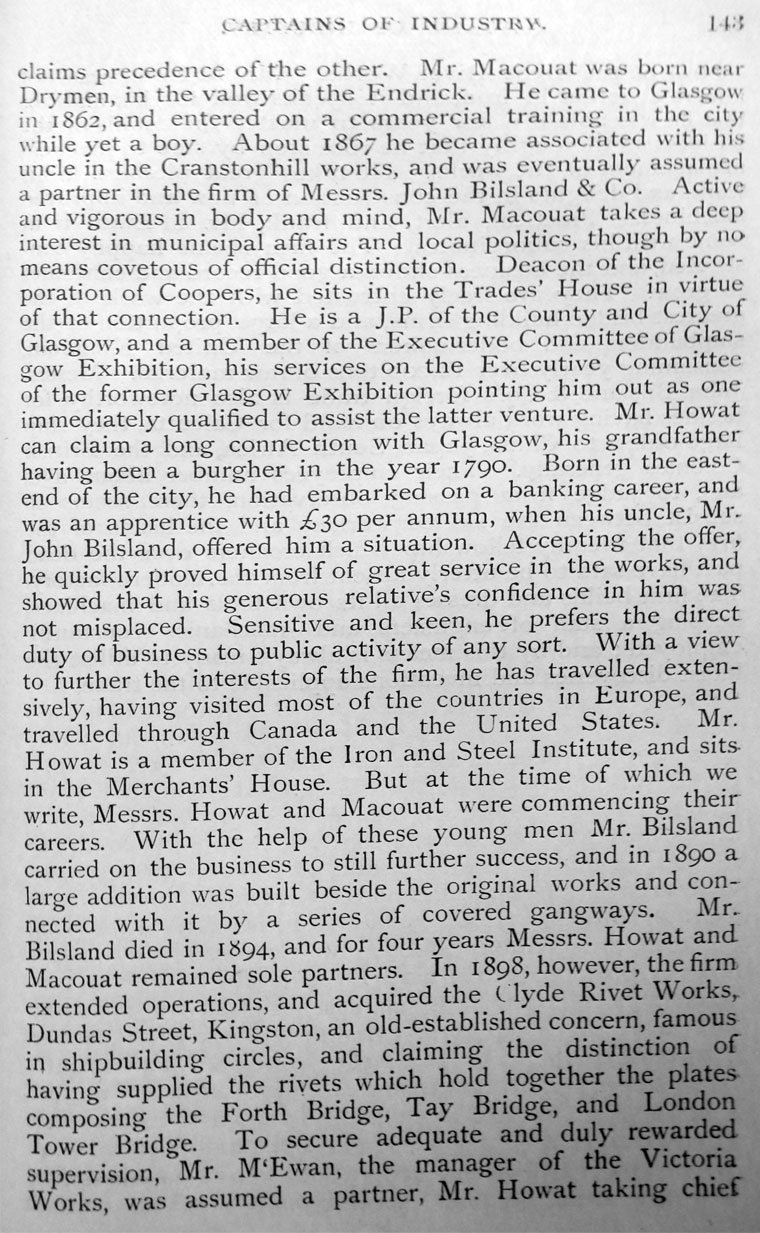 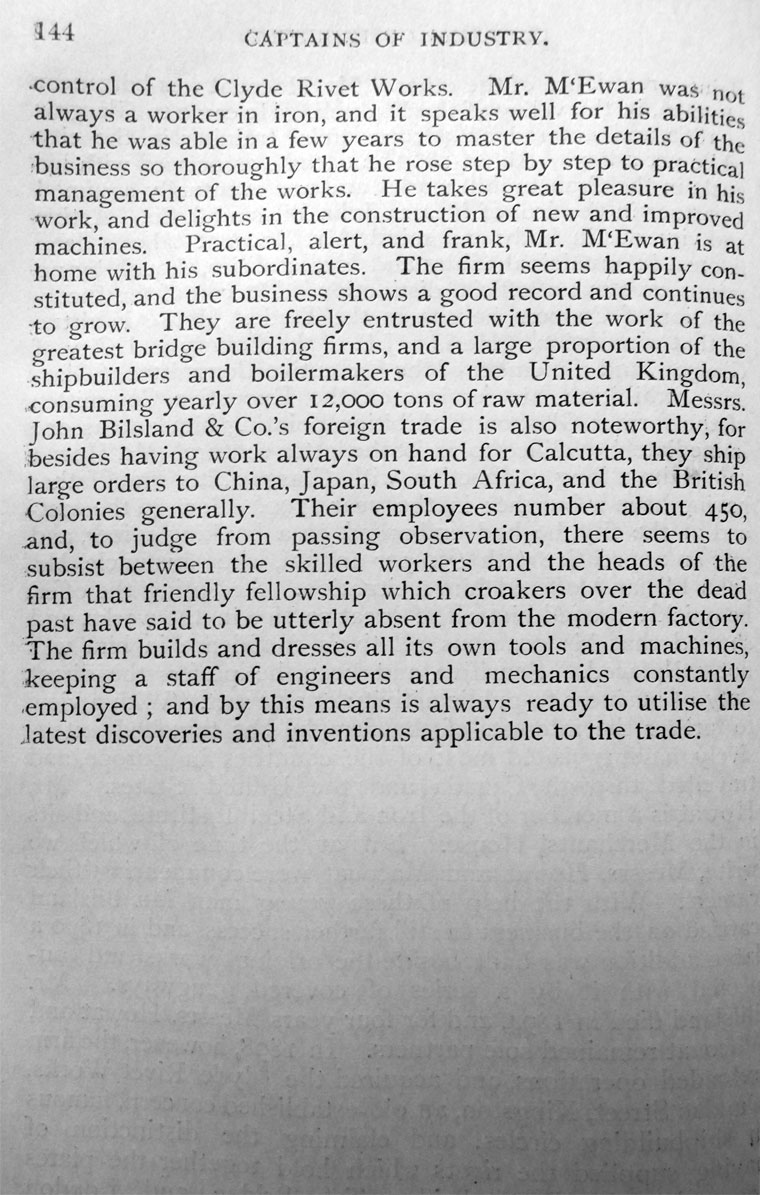 IRON and steel structures of all kinds require bolts and rivets to hold them together. What nails are to the joiner, lime and cement to the stone mason, solder to the plumber and tinsmith, that the bolt or rivet is to the boilermaker, engineer, bridge-builder, and shipbuilder. The rivet is an iron pin which holds iron plates together. Holes are bored through the plates; the rivet, softened by heat, is inserted, and by hammering or pressure flattened over to form a broad head. The bolt is also an iron pin, but its function differs from that of the rivet. To unfasten the rivet you must destroy it. Machine and other steel structures have to possess a certain quality of mobility, and retain the power of reconstruction. Certain parts wear out before the others, dirt and oil gather in the corners, and if the whole machine were solidly riveted together cleaning or repair would be difficult, and in most cases impossible. A pin therefore had to be devised, which, while giving the utmost rigidity, could be removed easily at need. The bolt is the requisite. It is an iron or steel pin with a strong head at one end and at the other a tapped thread, round which a nut can be screwed to the required position and pitch of firmness or pressure. It may be a matter of wonder to many that the boilermaker, engineer, or bridge-builder does not make his own bolts and rivets. He has the iron, the furnaces, and the tools at hand. Certainly, every iron worker can make a rivet or a bolt; any country smith will turn out one or the other in a few minutes. But the boilermaker uses thousands of rivets in a week, the bridge-builder consumes them by the ton, the engineer requires many bolts of different sizes and weights every day. To produce bolts and rivets with sufficient rapidity and cheapness special machines are required; men must be constantly employed doing nothing else if the necessary quantity is to be produced; hence it is that the making of bolts and rivets has become a separate industry of large proportions.

Victoria Bolt and Rivet Works at Cranstonhill, Glasgow, afford a good view of the process of bolt and rivet manufacture. Occupying the corner of Elliot Street and Houldsworth Street, the large works are crowded with furnaces, machines, and busy workers. Near the wide entrance are stacked the long rods of mild steel, varying in thickness from 0.25 in. to 2 in., the raw material of the product. A large proportion of these rods are tested by Lloyds', Board of Trade, and Admiralty surveyors before being sent from the steel works. When the bolts and rivets are completed, they arc often again tested by these authorities. A few yards away the rivet-making machines are at work. From the blazing furnaces the workers take the red-hot rods and feed them to a cutter, which chops them off at the requisite length, and then the pieces are stuck into a circular series of sockets, which revolve under a heavy hammer. The hammer strikes each rivet down, giving it shape and size; the rivet automatically moves round, and is jerked out into a receiving pan. Every second a rivet is made.

There are various sizes of rivet-making machines; some for small rivets weighing half an ounce, others for huge rivets of great strength. In this small space there arc five machines, each one employed in turning out a different size, but all working on practically the same principle.

In the building opposite, rivet-making machines of similar construction are busy operating, the two divisions of the works almost duplicating each other. It is curious to think of furnaces up one storey; but the exigencies of city life tax ingenuity, not in vain. By constructing these floors of solid concrete supported by beams of steel, Messrs. John Bilsland & Co. secure what is practically a ground floor on each storey. Upstairs the bolt-makers are at work. The similarity between bolts and rivets in their essential character suggests the question why the same machines are not suitable for producing both? The reason is that the head of the bolt requires to be carefully shaped, and the length of the rod is such that the mere downward pressure would tend to crack and split the metal. The bolt-making machine, therefore, is a complicated affair. There are different patterns, but in all the principle is similar. From the furnaces the heated rods are fed into the machine which cuts them and automatically sends them into the grip of what may lie roughly described as a pair of solid pincers, and two hammers which press and turn and beat the steel into shape with a rapidity, accuracy, and sequence almost startling in their human-like intelligence. These blacksmiths of steel turn . . . . . . . and holds the red-hot bar into the breast of the machine. Instantly two jaws close in on the metal, bite off a piece, pierce it, hammer it, and the octagonal nut drops down, a rough but veritable nut.

The nuts are then taken to be tapped and dressed, some polished, some merely smoothed, by the girls working in the same that as those who thread the bolts. Sonic machines are so constructed that the girls can it on the nut as the thread is cut. This ensures accuracy, but the process is rather slower than in those machines which deal with bolt and nut separately. Persons of delicate sense may perhaps feel a pity for girls doomed to labour at iron and steel, but a sight of the girls at work in the Victoria Bolt and Rivet Factory would relieve them of their pity. The work is healthy, interesting, and requires very little exertion of physical strength. On the upper flats of the huge buildings Messrs Bilsland store their finished products, requiring to keep a stock of 800 tons, consisting of rivets, bolts, and nuts of all sizes, ranging from 0.25in. thick 1 in. long up to large boiler bolts and nuts, weighing over a hundredweight.

The firm of John Bilsland & Co. is of long standing and high repute. Founded in 1855 by Mr. John Bilsland and Mr. James Rose, the business was begun in Main Street, Anderston. Mr. Rose retired in 1869, leaving Mr. Bilsland sole partner. Here he developed the business till in 1874 the growth of the trade rendered great changes necessary. To cope with the increased demand for his products Mr. Bilsland built the Victoria Bolt and Rivet Works, and took as partners his two nephews, Mr. William Howat and Mr. R. B. Macouat, who had previously been associated with him in the business. Mr. R. B. Macouat's connection dates somewhat earlier than that of Mr. Howat, though neither claims precedence of the other.

Mr. Macouat was born near Drymen, in the valley of the Endrick. He came to Glasgow in 1862, and entered on a commercial training in the city while yet a boy. About 1867 he became associated with his uncle in the Cranstonhill works, and was eventually assumed a partner in the firm of Messrs. John Bilsland & Co. Active and vigorous in body and mind, Mr. Macouat takes a deep interest in municipal affairs and local politics, though by no means covetous of official distinction. Deacon of the Incorporation of Coopers, he sits in the Trades' House in virtue of that connection. He is a J.P. of the County and City of Glasgow, and a member of the Executive Committee of Glasgow Exhibition, his services on the Executive Committee of the former Glasgow Exhibition pointing him out as one immediately qualified to assist the latter venture.

Mr. Howat can claim a long connection with Glasgow, his grandfather having been a burgher in the year 1790. Born in the east-end of the city, he had embarked on a banking career, and was an apprentice with £30 per annum, when his uncle, Mr. John Bilsland, offered him a situation. Accepting the offer, he quickly proved himself of great service in the works, and showed that his generous relative's confidence in him was not misplaced. Sensitive and keen, he prefers the direct duty of business to public activity of any sort. With a view to further the interests of the firm, he has travelled extensively, having visited most of the countries in Europe, and travelled through Canada and the United States. Mr. Howat is a member of the Iron and Steel Institute, and sits in the Merchants' House.

But at the time of which we write, Messrs. Howat and Macouat were commencing their careers. With the help of these young men Mr. Bilsland carried on the business to still further success, and in 1890 a large addition was built beside the original works and connected with it by a series of covered gangways. Mr. Bilsland died in 1694, and for four years Messrs. Howat and Macouat remained sole partners.

In 1898, however, the firm extended operations, and acquired the Clyde Rivet Works, Dundas Street, Kingston, an old-established concern, famous in shipbuilding circles, and claiming the distinction of having supplied the rivets which hold together the plates composing the Forth Bridge, Tay Bridge, and London Tower Bridge. To secure adequate and duly rewarded supervision, Mr. M`Ewan, the manager of the Victoria Works, was assumed a partner, Mr. Howat taking chief control of the Clyde Rivet Works. Mr. M`Ewan was not always a worker in iron, and it speaks well for his abilities that he was able in a few years to master the details of the business so thoroughly that he rose step by step to practical management of the works. He takes great pleasure in his work, and delights in the construction of new and improved machines. Practical, alert, and frank, Mr. M`Ewan is at home with his subordinates.

The firm seems happily constituted, and the business shows a good record and continues to grow. They arc freely entrusted with the work of the greatest bridge building firms, and a large proportion of the Shipbuilders and boilermakers of the United Kingdom, consuming yearly over 12,000 tons of raw material. Messrs. John Bilsland & Co.'s foreign trade is also noteworthy, for besides having work always on hand for Calcutta, they ship large orders to China, Japan, South Africa, and the British Colonies generally. Their employees number about 450, and, to judge from passing observation, there seems to subsist between the skilled workers and the heads of the firm that friendly fellowship which croakers over the dead past have said to be utterly absent from the modern factory. The firm builds and dresses all its own tools and machines, keeping a staff of engineers and mechanics constantly 'employed; and by this means is always ready to utilise the latest discoveries and inventions applicable to the trade.