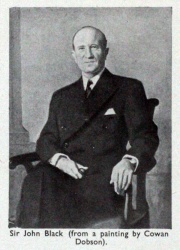 1895 February 10th. He was born in Kingston upon Thames the son of a clerk, John George Black and his wife Ellen (Smith)

Studied law at the University of London.

During World War I he served first in the Royal Navy Volunteer Reserve before transferring to the Royal Tank Regiment where he gained the rank of Captain.

After the war he joined Hillman as a sales manager and in 1921 married one of the owner's daughters, (Margaret Verena b. 1887).

Shortly afterwards he became joint managing director alongside his brother-in-law Spencer Wilks who had also married one of the Hillman girls (Kathleen Edith b. 1891).

In 1928 he joined the boards of Humber and Commer.

In 1933 he became managing director.

With the possibility of war again looming he enthusiastically backed the government scheme for Shadow Factories and gained contracts to build and operate two.

During World War II he became chairman of the Aero Engine Committee, a role for which he gained a knighthood in 1943.

In 1953 he became chairman of Standard-Triumph with Alick Dick taking over control of day to day operations.

He was injured in late 1953 in an accident when being given a demonstration of the Swallow Doretti: this affected his judgment and he was forced to resign in January 1954, officially because of his health.

In his retirement he took up farming.

1965 December 24th. He died suddenly at Cheadle Hospital, Cheadle, Cheshire at the age of 70.

Shortly after Black died in 1965, his successor at the helm of Standard-Triumph recalled Black with obvious affection as an "extrovert and exciting, if somewhat controversial personality". Recalling cars introduced under Black such as the Triumph TR2, Dick candidly stated that "the emphasis was on the chassis [and on the car's performance] rather than the body. [Also] typical [of Black] was the fact that all his cars had very little leg room and lots of head room because he was a six footer with short legs".

Black married Daisy Hillman, daughter of William Hillman, founder of the Hillman Motor Car Company, in 1921; the marriage was dissolved in 1939.

He married again in 1943 to Alicia Joan Pears Linton, daughter of the Bishop of Persia later rector of Handsworth, with whom he had three sons.

Son-in-law of William Hillman and Brother-in-Law to Captain S. Wilks.

1919 Made a director of Hillman

1921 Took over the joint running of Hillman when William died