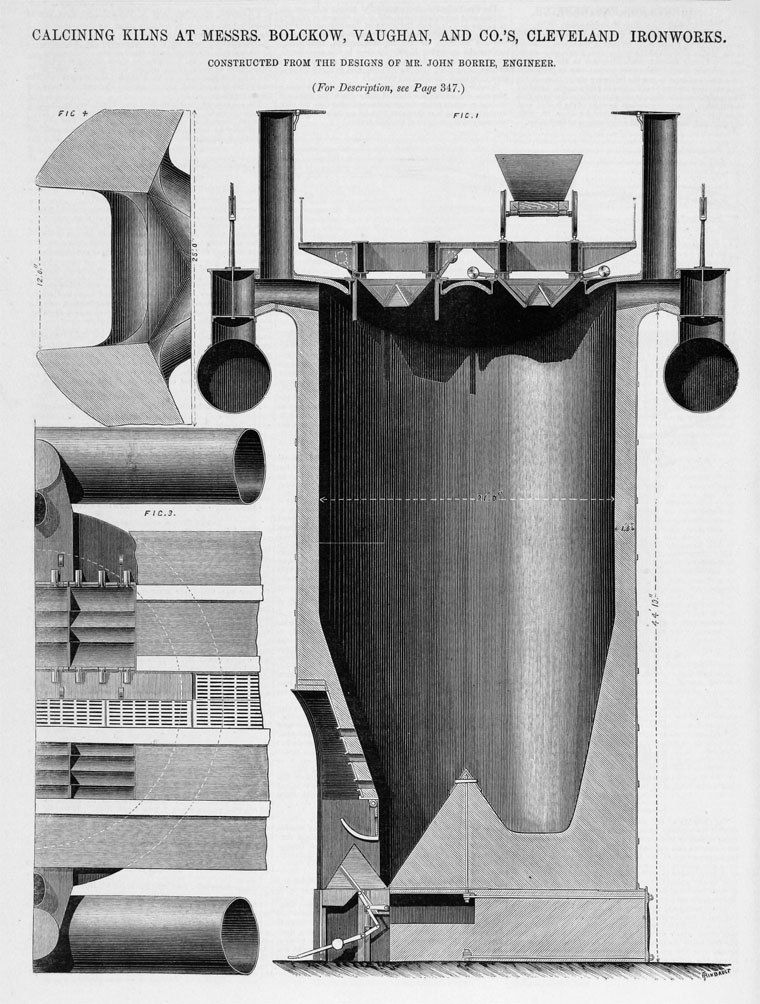 1869. Calcining Kilns at the Cleveland Ironworks.

His father, Peter Borrie, who had been proprietor of the Dundee Foundry, went to Middlesbrough in 1853, and established himself as a shipbuilder.

In 1856 John Borne was first employed in the engineering office of Messrs. Bolckow and Vaughan at Middlesbrough, where he remained until 1861.

In that year his health failed, symptoms of lung-disease appearing. He made a voyage to the Mediterranean, and returned much benefited; and afterwards became associated with Messrs. Sproat Brothers, ironfounders and engineers, Middlesbrough, with whom he remained until the partnership was dissolved in 1864.

In 1866 he became resident engineer at the Cleveland Iron Works, Eston. This position he filled with much efficiency, during extensive alterations by which the plant was practically reconstructed. The new blast-furnaces at that time erected were the largest in capacity and height in the kingdom. He designed and set to work the hopper-and-spout kilns for calcining ironstone, which have since become general, reducing the cost for labour very considerably; an illustrated description of these kilns was given in "Engineering" of 26th November 1869.

In consequence of impaired health he was compelled during the winter of 1870-71 to resign this post; and he subsequently practised as a consulting engineer. He had great mechanical ability, and was a good designer of machinery and appliances, notably those connected with the manufacture of iron.

He died of heart disease and congestion of the lungs, at Stockton-on-Tees, on 8th February 1884, in his forty-seventh year.

He became a Member of the Institution in 1869.