Grace's Guide is the leading source of historical information on industry and manufacturing in Britain. This web publication contains 148,467 pages of information and 233,894 images on early companies, their products and the people who designed and built them. 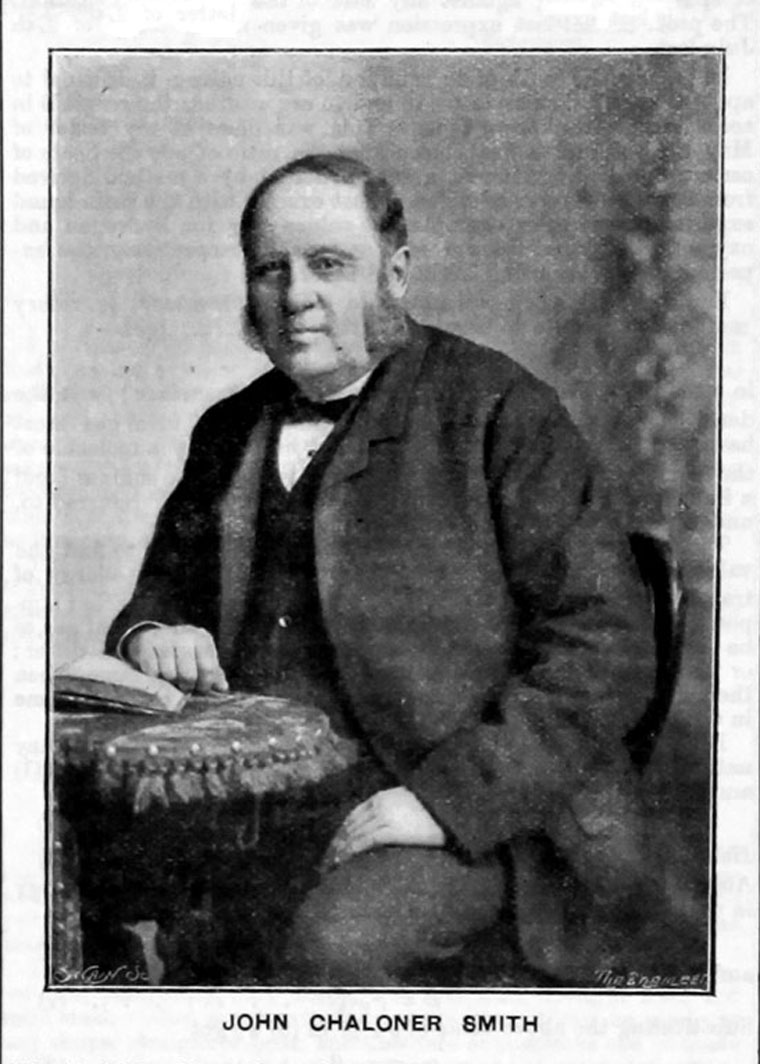 JOHN CHALONER SMITH, eldest son of Mr. John Smith, a Proctor of the Irish Ecclesiastical Courts, was born in Dublin at St. Stephen's Green on the 19th of August, 1827.

He was educated at Trinity College, Dublin, after which he became a pupil of the late George Willoughby Hemans, by whom, on the expiration of his pupilage, he was appointed Resident Engineer of the Waterford and Limerick Railway on the 5th of December, 1853.

Four years later he became Engineer of the Waterford and Kilkenny Railway, which post he held until that line was amalgamated with the Waterford and Limerick in 1861, when he resigned to enter into partnership with the late John Bagnell, as railway contractors. This partnership proved a great financial success, Messrs. Smith and Bagnell constructing several railways, including the Borris and Ballywilliam, the Clara and Streamstown, and the Roscrea and Birdhill, as well as many other large works.

On the 27th of February, 1868, Mr. Smith, having previously retired from railway contracting, was appointed Engineer of the Dublin, Wicklow and Wexford Railway, Messrs. Cotton and Flemyng, by whom nearly all the new works were then being constructed, being Consulting Engineers to the Company.

Subsequently Mr. Smith became Chief Engineer, and during the thirty years of his connection with that Company he carried out several important works, including the construction of the New Ross extension, a line about 18 miles in length, involving rock-cutting 3 miles long of an average depth of 40 feet, a tunnel of 740 yards, and a bridge over the River Barrow; also the re-modelling and doubling of the line between Kingstown and Dalkey, and the reconstruction and enlargement of the Westland Row terminus.

Mr. Smith and Mr. W. H. Mills, Engineer-in-Chief of the Great Northern Railway of Ireland, were joint Engineers in the construction of the loop line connecting the Westland Row and Amiens Street termini - an undertaking which involved some heavy and complicated bridge-work in the crossing of streets and river. This line had been proposed by Mr. Smith twelve years before the Act of Parliament was obtained, and he never for a moment ceased fighting in its favour until he was successful in getting the Act passed in 1884. It was made under a Joint Committee (and Guarantee) composed of Directors of the Dublin, Wicklow and Wexford Railway, the Great Northern Railway of Ireland, and the City of Dublin Steam Packet Company, and is an important line for the maintenance of through communication between Kingstown, Queenstown and America.

During the latter years of his life Mr. Smith suffered very much from defective eyesight and was obliged to undergo an operation for cataract. He retired about a year before his death, which took place on the 13th of March, 1895, from angina pectoris.

Mr. Smith was a man of culture and ability, and a good judge of engravings, especially mezzotintos, on which the authorities of the British Museum occasionally sought his opinion. He succeeded in getting together an extremely fine collection of mezzotintos. A few years ago, when the Dublin National Library and Museum Buildings were about to be furnished, Mr. Smith offered his entire collection to the Government of the day for a sum of £7,000, but the Treasury could not see their way to purchase it. A much larger sum was realized for two portions of the collection sold by auction. Owing to the munificent gift of £1,000 by Sir Edward Cecil Guinness, Bart. (now Lord Iveagh), some exquisite specimens were purchased at those sales for the Dublin National Gallery. Mr. Smith published a work on English mezzotinto portraits which is considered a standard authority by collectors.

Of late years he took great interest in the financial relations between Great Britain and Ireland, and gave important evidence before the Royal Commission on that subject now sitting. He was a most active member of the Institution of Civil Engineers of Ireland, of which he was for fourteen years Honorary Secretary, and President in 1893 and 1894. Mr. Smith had a pleasant, genial manner, was particularly kind and encouraging to his assistants, and was always anxious to recognise ability wherever he found it. His loss will be keenly felt by many charitable bodies.

He was elected a Member of the Institution on the 14th of January, 1862.