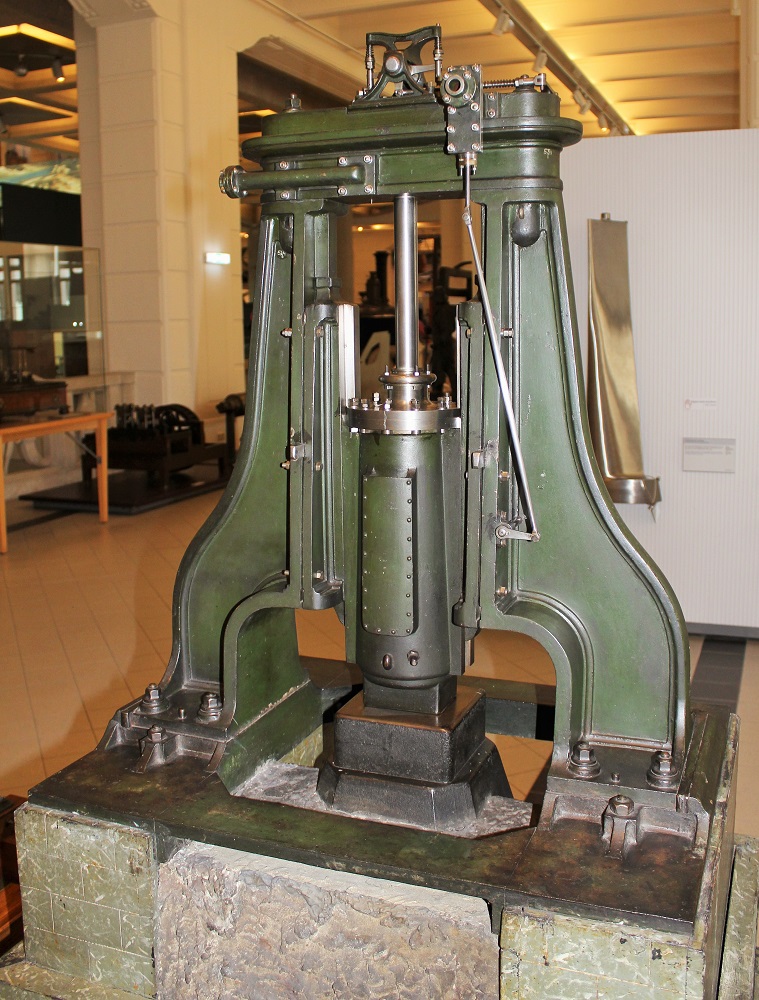 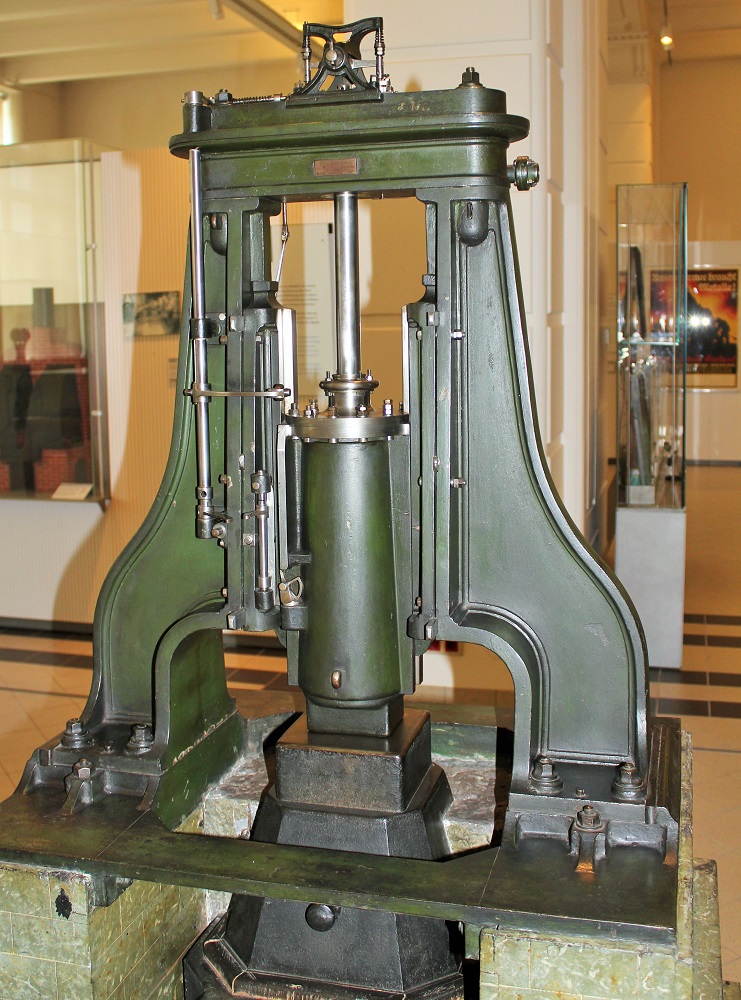 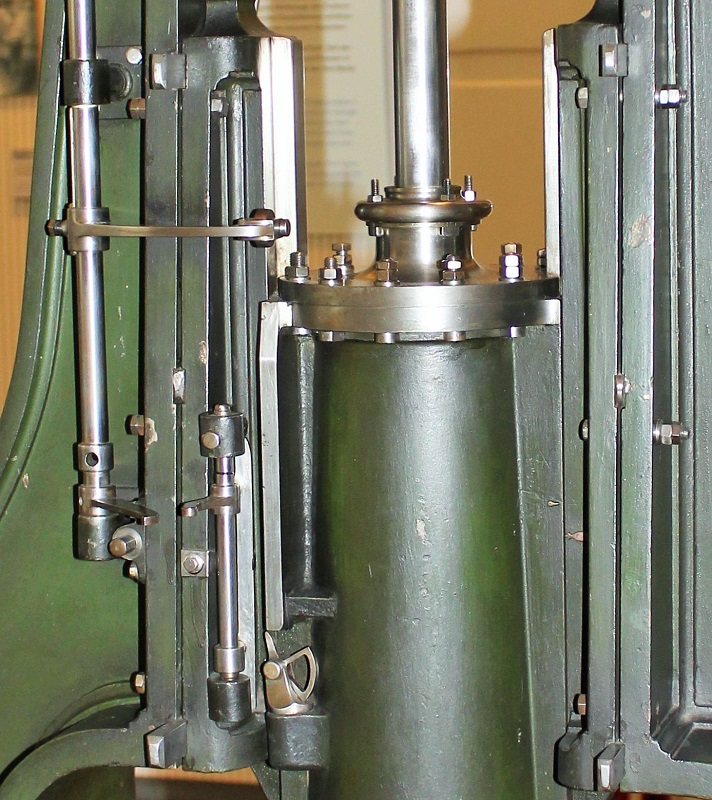 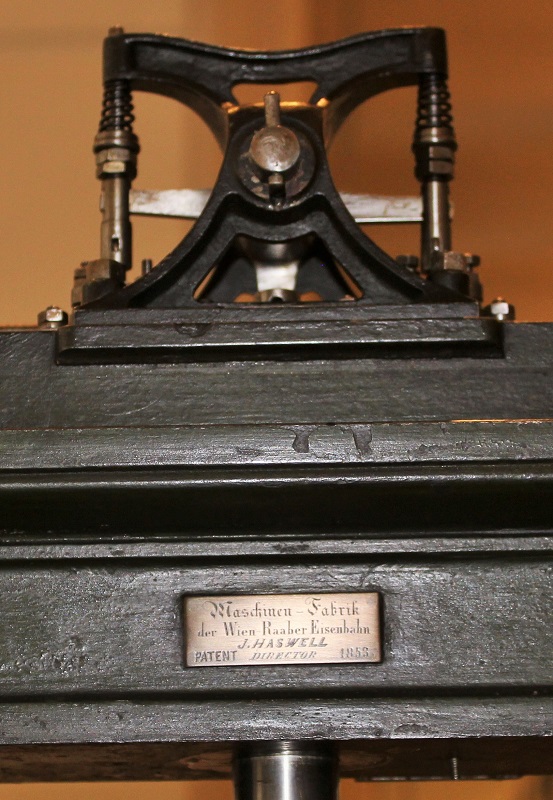 A fine 1:5 scale model of the steam hammer patented by John Haswell in 1853 is on display at Vienna Technical Museum. The hammer was made at the Maschinenfabrik der Wien-Raaber Eisenbahn, where Haswell was the Director.

The machine bears a very close resemblance to that patented by John Condie in 1846. Presumably subtle differences were incorporated.

A few of the operating components are missing, including the three levers used by the operator. This makes the operating mode difficult to understand. Referring to photo 3, and the long vertical shaft on the left: the operator would pull a horizontal lever on this shaft to rotate it. At the top of this shaft (photo 4) is a crank which moves a horizontal spring-loaded shaft. This in turn acts on another crank to turn the spring-balanced rocker which opens and closes the steam inlet valve and the exhaust valve (photos 4 & 5: inlet valve on left in photo 5).

Part way up the vertical shaft will be seen a lever with a small roller on the RH end. When the cylinder rises, a ramp on the side of the cylinder contacts the lever to rotate the shaft and open the exhaust valve, therby allowing the cylinder/hammer to drop. The lever is keyed on the shaft, and can be repositioned to alter the striking point.

The small 'quadrant' attached to the cylinder is called a 'kicker'. As the hammer impacts the workpiece, inertia causes the kicker to rotate. By some means not apparent, this acts on the smaller vertical shaft, which in turn allows the main vertical shaft to rotate, moving the horizontal shaft (helped by its spring), thereby opening the steam admission valve to lift the hammer.

Just visible below the main vertical shaft is a small protruding shaft. This should have a hand lever on it. Referring now to photo 1, this allows the operator to open and cose the steam supply valve at the top of the machine.

The same arrangement had been used on John Condie's hammer, as illustrated in the 1851 'Imperial Cyclopaedia of Machinery'. Only minor differences are apparent on Haswell's hammer. These include coil springs instead of plate springs pressing on the steam inlet and exhaust valves, and the riveted plate seen on the cylinder in photo 1.