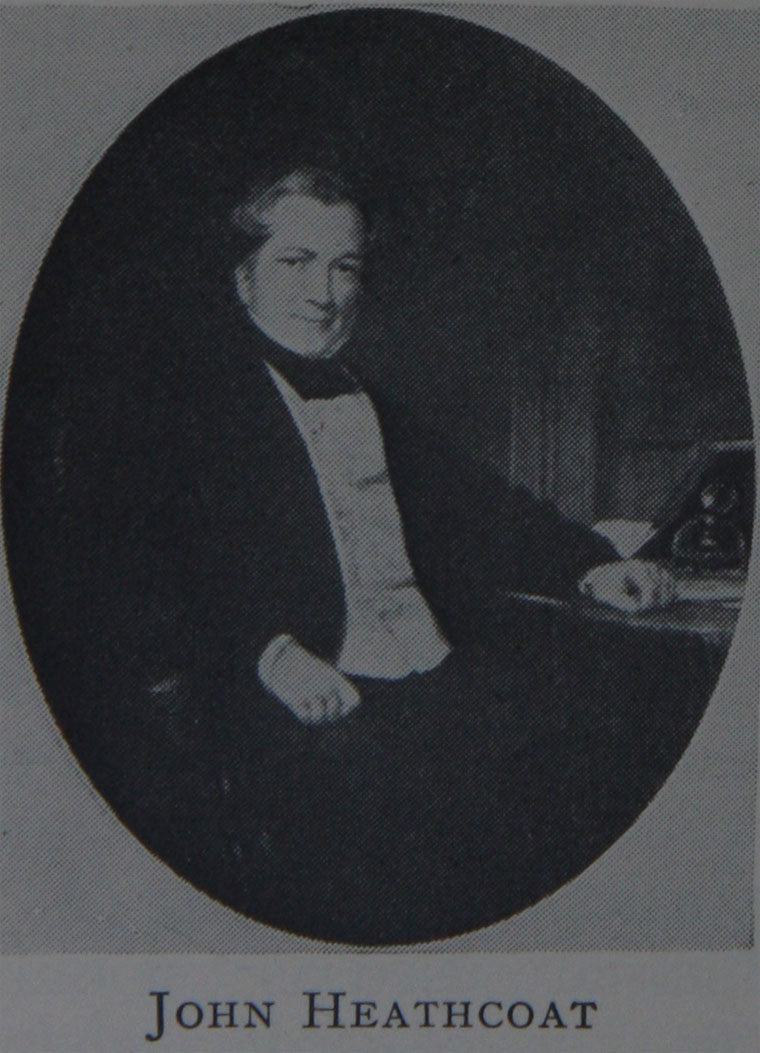 1783 August 7th. Born at Duffield near Derby. During his apprenticeship to a frame-smith near Loughborough, he made an improvement in the construction of the warp-loom, so as to produce mitts of a lace-like appearance by means of it. He began business on his own account at Nottingham, but finding himself subjected to the intrusion of competing inventors he removed to Hathern. There in 1808 he constructed a machine capable of producing an exact imitation of real pillow-lace. This machine made lace was also called English net or bobbinet.

This was by far the most expensive and complex textile apparatus till then existing; and in describing the process of his invention Heathcoat said in 1836, "The single difficulty of getting the diagonal threads to twist in the allotted space was so great that, if now to be done, I should probably not attempt its accomplishment." Some time before perfecting his invention, which he patented in 1809, he removed to Loughborough, where he entered into partnership with Charles Lacy, a Nottingham manufacturer; but in 1816 their factory was attacked by former Luddites, thought to be in the pay of the lace makers of Nottingham, and their 55 lace frames were destroyed. The damages were assessed in compensation by the King's Bench at £10,000; but as Heathcoat declined to expend the money in the county of Leicester he never received any part of it.

Heathcoat had already bought an unoccupied woollen Mill in Tiverton, Devon. In fact he was overseeing work in Tiverton when the attack in Loughborough took place. He wrote to the Mayor of Tiverton, asking for protection for the Mill there, and in the letter disclosed:

"I have great apprehension of an immediate attack at this place also. In fact I believe the real cause of this mischief being done is principally, if not wholly, owing to the offence of removing here, and I have been informed upon undoubted authority that the Nottingham Lace Makers have sworn my entire destruction"

Undaunted by his loss, he continued to construct new and greatly improved machines in his new factory in Tiverton, propelling them by water-power and afterwards by steam. His claim to the invention of the twisting and traversing lace machine was disputed, and a patent was taken out by a clever workman for a similar machine, which was decided at a trial in 1816 to be an infringement of Heathcoat's patent. He followed his great invention by others of much ability, as, for instance, contrivances for ornamenting net while in course of manufacture and for making ribbons and platted and twisted net upon his machines, improved yarn spinning-frames, and methods for winding raw silk from cocoons.

1826 John Heathcoat, Tiverton, Machinist, became a member of the Institution of Civil Engineers.[5]

He also patented an improved process for extracting and purifying salt. An offer of £10,000 was made to him in 1833 for the use of his processes in dressing and finishing silk nets, but he allowed the highly profitable secret to remain undivulged.

In 1832 he patented a steam plough, the only full version of which sank without trace in a field.

1832 Elected Member of Parliament (MP) for Tiverton. Though he seldom spoke in the House of Commons, he was constantly engaged on committees, where his thorough knowledge of business and sound judgment were highly valued.

He retained his seat until 1859