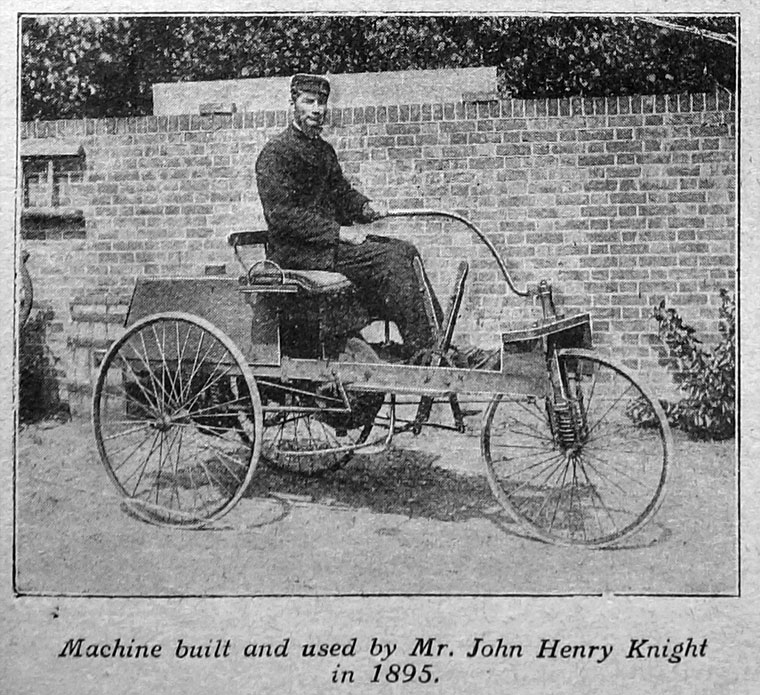 Note: This is a sub-section of John Henry Knight

1909 Recollections of the Early Days of Motoring [1]

MEN of the present day who buy their cars, and grumble if the slightest thing goes wrong, have no idea of the difficulties of the early motorists. As long ago as 1868 I made a steam carriage, and ran it on the roads for three or four years. To avoid traffic, the runs were chiefly made in the early mornings; breakdowns were frequent, and eventually the steamer was sold to a man who had invented a traction engine wheel and required a small engine on which to try it.

In 1873-4 I experimented with a steam engine and coil boiler, but the machinery was too heavy for the power it gave, and in the end of the latter year I decided to try an oil or benzoline engine. There were many difficulties in making a light engine; at first it had two flywheels, and, having hot tube ignition, it was very difficult to start, so one larger and heavier flywheel was put on. The vibration was very great, and to find out in what position it ran with least vibration, it was temporarily bolted down on two planks, vertically and afterwards horizontally; in this latter position the vibration was considerably less, so I decided to fit it as a horizontal engine. Many trials were made with various carburetters of the wick type, using gasoline or benzoline.

Meanwhile the chassis was being proceeded with. It had three wheels; the wire driving wheels were 3ft. in diameter, the steering wheel was 2ft. 6in., all with solid rubber tyres. The engine was fixed at the back of the car above the axle, on the crankshaft were two wooden V pulleys for the two speeds, on the countershaft were two larger wooden V pulleys; these were driven by endless ropes, tightened by jockey pulleys, and on the countershaft was a chain pinion, driving the axle by means of a Green's mowing machine chain. One wheel only was driven.

It was found on the first trial that the ropes caused considerable friction, for when one was removed the car went much faster. The wear on the ropes, and wooden pulleys was very great, so leather belts 2in. wide were substituted, and these, of course, ran on flat pulleys. These were of wood, with sheet-iron flanges on each side to prevent the belts running off. The belt on the small driving pulley gave trouble by slipping, so this pulley had holes drilled in it which to a great extent stepped the slipping. Alterations were continually made, and in September, 1895, it ran very fairly.

Many people came to see it, and the first lady to ride on it (other than members of my family) was Miss Shaw Lefevre, whose brother, now Lord Eversley, had a few months previously introduced in the House of Commons a Bill to allow mechanical carriages (as they were then termed) to run in England, but the Liberal Government had been swept away in July, so it was not till two years later that the Emancipation Act was passed. It was in regular use for about two months, when an unlooked-for difficulty occurred, the carburetter, which had worked well during the warm weather, now gave trouble, and had to be jacketed so that the warm water should circulate round it.

It was also impossible to start the engine without warming the carburetter. At the end of October I received two summonses, one for driving a locomotive without a license and one for not having a red flag carried in front. The hearing took place at the Farnham Police Court on November 1st. The Surrey County Council sent down counsel to prosecute, and he dwelt on the danger of using a machine on the roads driven by explosions. Of course I pleaded "not guilty," as I contended that a light car under 5cwt. could not come under the Traction Acts, and that when these Acts were framed such light machines were not thought of; that in every country in Europe, except Russia and Turkey, such motors were allowed to run. But I was fined half-a-crown on each summons, and with costs about 30s. this, of course, stopped the machine from running on the roads, but fortunately I have a private road, a farm road, about 200 yards from my house; this road is about 700 yards long, with a rise in the middle, and it is a fair sample of a country lane, and, though rough in places, it is nearly level for 150 yards at each end. I tried the car with a vaporiser and paraffin; it ran very well, but some smoke could not be avoided.

It had been running up and down the private road one morning, and I had told my driver to take one more turn and then run home, whilst I proceeded to walk home. I fortunately noticed a policeman ahead of me, and saw him get through a hedge and hide himself behind a bush, so I turned back and told my man what I had seen, and that I would send the gardener to help him push the car home, which was done. This was probably the first police trap on record.

As the machine ran on three wheels and centre of gravity was high, I had doubts of its stability, so I altered it into a four-wheeler, and had two quiet runs with it at the end of April, 1896, before sending it up to the Crystal Palace show early in May of that year. Here on the opening day it was running nearly all the afternoon, and, being the only British car there, I put a small red Ensign in front. The other cars running were Sir David Salomon's Peugeot, the Hon. Evelyn Ellis's Panhard, and a Benz. The car remained some months at the Crystal Palace.

On its return I put in a larger cylinder and altered it in many ways, putting in electric ignition. In this condition I had several runs with it before the Act was passed, but avoided towns and villages.

One difficulty was the cooling water. I tried several methods of cooling, letting the water flow over trays in the tank, over which a current of air was induced by the exhaust. A cooler was made by putting a number of tubes through a tin tank and fixing this in the front of the car so that the air would pass through the tubes; afterwards a coil of copper pipe was used, but without grills. The water got very hot after a run of six or eight miles. Then the wire wheels gave out, and were replaced with wooden ones.

I sometimes heard some amusing remarks from the by- standers. One boy said "Why, he grinds it up like a barrel organ!" A man once said, as I was trying to start the engine: "Hard work, that, governor!" I was often followed by a crowd of youngsters, and, when stopping, many people would come and look at it, and often ask questions.

One source of trouble was the wheels. On one occasion, as I was taking a friend for a run, I felt a heavy blow on my right shoulder, and, thinking that one of my sons, who was following on a bicycle, had thrown something at me, I angrily turned round, when I found that a tyre had come off. Then the wire wheels gave trouble, and were replaced with wooden ones, these being far more satisfactory, but they added considerably to the weight.

During the three years I used this car there was hardly a week that some alteration or improvement (so called) was not made. It was laid aside in August, 1898, when I bought a Benz car, but the old machine has often been run since that date on a private road, and is still in running order.

The year 1895 was a memorable year in motorcar matters, for in that year the Paris-Bordeaux race was held, the Hon. Evelyn Ellis bringing over his Panhard, which he ran about the South of England. Several men, like myself, were hauled up by the police, and the Self-Propelled Traffic Association was formed, and a few years later this was merged in the R.A.C.

Unhappily, we pioneers of the movement made several enemies; horses were frightened, and by, some it was thought "bad form" to adopt the new method of locomotion.