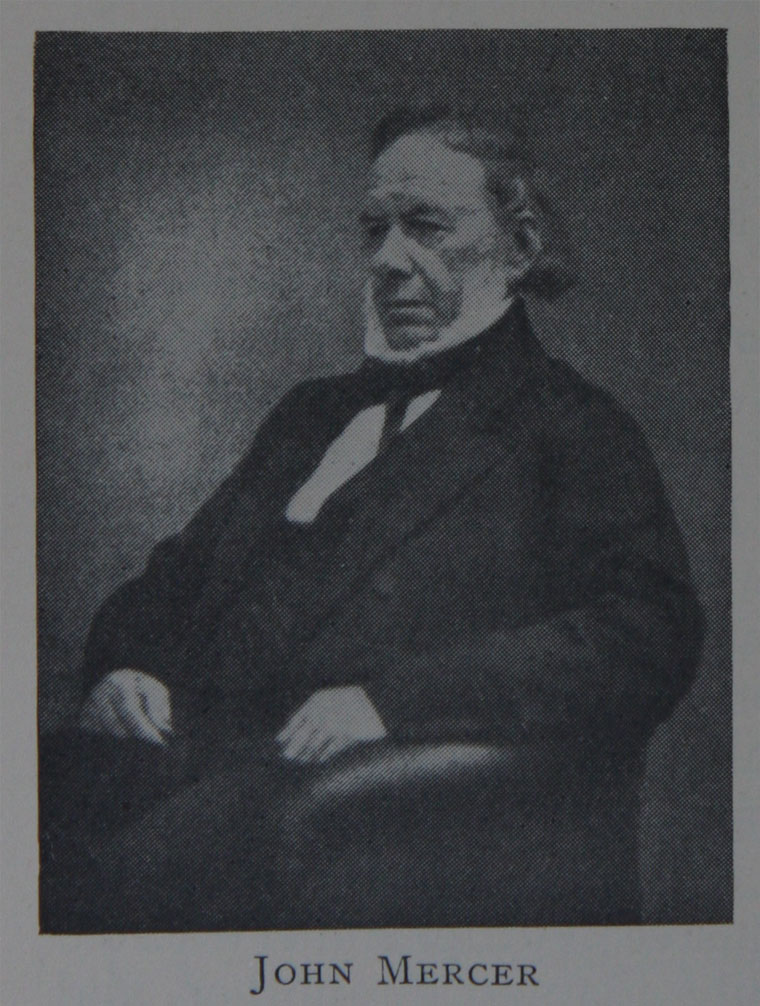 John Mercer (1791-1866) was an English dye and fabric chemist and fabric printer. He developed a process for treating cotton called Mercerization that improves many of its qualities for use in fabrics.

Born on 21 February 1791 at Dean, in the parish of Great Harwood, near Blackburn, Lancashire, the eldest of three children of Robert Mercer (d. 1800), a hand-loom weaver and farmer, and his wife, Elizabeth Clayton.

1800 He received no formal education and began work as a bobbin winder in 1800, at the age of nine.

He taught himself dyeing of fabrics and went onto set himself up in business with a partner who had suitable premises, offering a dyeing service to the Blackburn area.

1809 Became an apprentice in the colour shop of Fort Brothers at their Oakenshaw printworks but learnt little of the process.

c.1814 Discovered a process for fixing a certain orange colour in cloth.

1841 Met and became friends with Lyon Playfair, one of the chemists at Thompson's works at Clitheroe.

Regularly attended Playfair's "Whalley" meetings of scientists, at one of which he proposed a theory of catalysis.

1844 Mercer's major discovery came when he investigated the action of caustic soda, sulphuric acid, and zinc chloride on cotton cloth, paper, and other materials made from vegetable fibres. These experiments (which were carried out in commercial partnership with Robert Hargreaves of Broad Oak, near Accrington, and at his works) led to the discovery of the textile process known as Mercerization and to the preparation of parchment paper, patented by Mercer in 1850.

1848 The Fort Brothers firm dissolved in the face of foreign competition.

1852 Elected Fellow of the Royal Society

Mercer died at his home, Oakenshaw House, Oakenshaw, Clayton-le-Moors, on 30 November 1866. He was buried in the family vault in St Bartholomew's Church, Great Harwood. A clock tower memorial was unveiled in Great Harwood in June 1903.

Mercerized cotton dyes to a darker shade, but the effect if entirely optical, not physical. Mercerized cotton has a lower affinity for dyes than non-Mercerized cotton. By treating cotton cloth with any one of caustic soda, sulphuric acid or zinc chloride in a solution of a certain concentration, the individual cotton fibres became thicker and shorter, and the strength of the cloth was greatly increased. It also became semi-transparent.

'Prior to the introduction of the Mill engraving machine and the present methods of producing rainbow, or ombre effects, these were obtained by means of the ribbon roller, the invention of John Mercer, a pioneer in the calico-printing industry, whose name is a household one as the inventor of the process of mercerising cotton cloth. The ribbon roller was a wooden cylinder about 6 inches in diameter, having the blanks grooved out to a depth of about five-eighths of an inch, and run in a colour box like the cylinder. The projections on the roller just touching the colours were impressed on the cloth as. it passed over the upper part of the roller. Three cylinders or more might be used, each carrying different colours ; the second and third overlapped the first, and the colours thus blending produced the requisite rainbow or shaded effects. This method is now, however, superseded by the present day ombre effects obtained from the copper cylinders.'[1]