Crane at terminus for transhipping stone from Ralph Allen's quarry to boats on the River Avon. Detail from engraving by Nathaniel Buck, 1734, displayed at the Building of Bath Museum

Engraving from Desaguliers' book displayed at the Building of Bath Museum 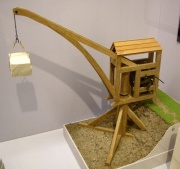 Model of Padmore's crane built for Ralph Allen, at the Building of Bath Museum

Model of Padmore's railway wagon built for Ralph Allen, at the Building of Bath Museum 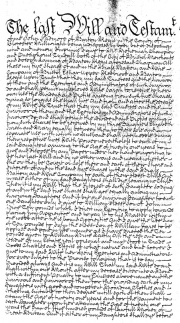 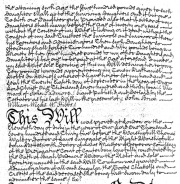 John Padmore (born before 1700)[1] was an ingenious civil and mechanical engineer, based in Bristol

'St. Georges. ….... the principal production of art is a curious hydraulic machine, erected upon the river Avon, and invented and constructed by the late ingenious mechanic and mathematician, Mr. John Padmore, for throwing water into a reservoir, for the use of the city of Bristol.~ The reservoir is at a little distance, on the top of a hill, whence, by subterraneous pipes, the water is conveyed to the city. There were formerly two machines for the same purpose, at Hanham-mills, in the parish of Bitton, but they were taken down in the year 1720.' [2]

1715-20 Padmore built Sea Mills harbour near Bristol, in 1715-20. This was the first floating harbour on the Avon, and the third in the country after Rotherhithe and Liverpool. It was used as a whaling station and by privateers until its closure in 1766 [3]. The remains of masonry walls may be seen in the water just inland from, and parallel to, a railway bridge next to Sea Mills station[4]

Bristol hot springs: 'The Situation of the Hot-Well is as picturesque perhaps as can be imagin'd; it lies on the Side of the River Avon, about a Mile and half distant from the City of Bristol. The Stream issues from a very high Clift of Lime Rock, perhaps two hundred Feet below the Summit, and ten above the Level of Low Water, but as the Water rises here in the lowest Tides thirty Feet, and in the Spring much more, it was of Necessity render'd inaccessible some hours every Day, till Mr Padmore, (a Man well known for his Genius in Mechanics) inclos'd it with a Cistern, and affixed Pumps to the Spring, by means of these the Stream is elevated almost thirty Feet in all its native Heat, Purity, and Perfection: Notwithstanding this Care the River Water, when it rises above the Spring, mixes with the Medicinal and renders it unfit for Use; this is perfectly well known by those that pump at the Well, and consequently as soon as perceived they abstain till it recovers its former Purity.'[5]

1717: Padmore appears to have been responsible for the aqueduct and water engineering of the copper works and mills at Llangyfelach, the first in the Swansea Valley.[6]

1729 Subscribed to 'A New and Accurate Map of South Wales' by Samuel Bowen.[8]

1729 'Thomas Lord Mansel granted a lease to John Padmore of Bristol and Walter Hughes of Swansea in 1729 for coal at Llanrhidian salt marsh.'[9]

In 1731 he built a railway system and crane for transporting building stone from Ralph Allen's quarry near Bath to the quayside on the River Avon, where a slewing crane of Padmore's design loaded the stone onto boats. The crane featured ratchets and a brake. The introduction of these as interconnecte safety devices is credited to Padmore. He was also a very early user of cast iron wagon wheels. More information below.

1733: He built the 'Great Crane' at Mud Dock in Bristol Harbour. 'On the western side of the Mud-dock is the great crane, erected on fourteen pillars, cased with iron, by the ingenious Mr. Padmore; a curious piece of mechanism, and worthy of observation. Cranes of the same internal construction are erected in proper situations for loading and unloading, which are all numbered, for the more readily finding the subjacent vessels.[10]

1735 July 11th. Will proved of John Padmore, Millwright of Barton Regis, Gloucestershire. Written 18th September 1734 and mentions his wife Sarah and his three daughters Elizabeth, Sarah and Mary who he leaves 500 pounds to each on reaching the age of 21. Also mentions his cousin Nathaniel Hobbs along with several other names without relationship to him. Mentions his shares in the Brass Battery and Wire Co.[12]

1769 Advertisement: 'TO be Disposed of, a Round-about CRANE constructed by the late ingenious Mr. Padmore, capable of raising two Tons Weight by two Men only, and will be sold very cheap, being obliged to be removed in a limited Time. Any person willing to treat for the same may receive further Information by applying to William Biggs, on the Quay, Bath, who will shew the Crane. It is situated on the Bank of the River Avon, very Convenient for Water Carriage to Bristol.'[13]. This may well be Ralph Allen's crane, the business having declined after Allen's death in 1764.

Writing of John Padmore, Stephen Hughes[14] says that he was a polymath whose works [in addition to those referred to above] included building steam engines for the Bristol Waterworks Company, and pumping machinery for the Hotwells at Bristol. He also designed the Upper Forest Mills of Lockwood, Morris and Co. (copper), c.1735.

Tramway and Cranes for Ralph Allen, 1731

Little tangible evidence of Padmore's work has survived, and recorded information is limited due to the early date of his activities. However, the stone handling equipment (railways and cranes) that he built for Ralph Allen in Bath received much attention from the affluent visitors to that city. Perhaps for this reason, detailed drawings and descriptions of some of the equipment were published by Desaguliers and Labelye in 1733/1734.

Original engravings from 'A Course of Experimental Philosophy' by John Theophilus Desaguliers are displayed at the Building of Bath Museum. These are not accompanied by the text, which may not be as disadvantageous as might be thought, given the ponderous writing style. Visitors to the museum will benefit from the excellent models, but some aspects remain puzzling. In particular, in the case of the railway wagons, it will be noted that there are two braking systems. One features wooden levers pressing brake blocks against the rear wheel rims. These are each applied by a chain windlass which incorporates a ratchet to hold the brake on. The levers which turn the windlasses are not shown, although sockets for them are apparent in the shafts. Two levers are shown which, when dropped down, cause square iron sprags to slide out between the spokes. It hardly seems credible that these could be used to stop a runaway wagon, due to the risk of breakage. However, Lewis[15] anticipating the risk, says that 'apparently they worked'. He also points out that on each axle, one wheel was fixed to the rotating axle (square hole in wheel, square end on shaft), while the other wheel rotated freely on the axle. This protected the axle from the effects of torsion when only one wheel was braked. A drawing of an axle, and an end elevation of a wagon, were included by Labelye and reproduced in Lewis's book. Labelye also included a drawing of the sprag operating mechanism [16], but this could not be described as self-explanatory.