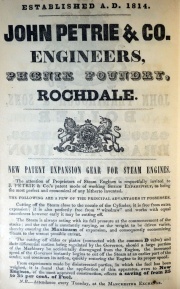 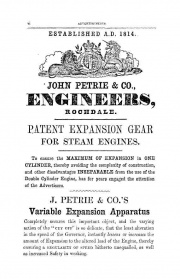 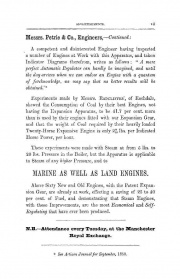 c.1811 John Petrie began business as an engineer in Rochdale.

1814 Established the Phoenix Ironworks, later known as Petrie and Co.

For a long time (by 1861) their engines had been fitted with self-regulating expansion gear.[1]

1857 Patent to James Petrie and William McNaught, of Rochdale, in the county of Lancaster, Engineer, for the invention of "improvements in steam-engines."[2]

1861 Partnership change. '...the partnership business heretofore carried on by the undersigned as Engineers, Millwrights, and Ironfounders, at Rochdale, in the county of Lancaster, under the firm of John Petrie and Company, so far as regards the undersigned John Petrie and William Petrie was dissolved, on the 1st day of April last, by mutual consent....John Petrie. Joseph Petrie. William Petrie. George Petrie. James Petrie.'[3]

1883 Dissolution of the Partnership between George Petrie and John Edward Petrie, trading at Rochdale, Lancashire, as Engineers and Ironfouudere, underthe style of John Petrie and Co.[5]

1888 Dissolution of the Partnership between John Petrie and Edward Burford Petrie carrying on business as Ironmongers and Iron and Steel Merchants, at Yorkshire-street, Rochdale, under the style of John Petrie[6]

1899 Horizontal steam engine on display at the Discovery Museum, Newcastle

1907 The company was acquired by John Holroyd and Co but continued to trade under the Petrie name with its own board of directors.

1920 Merged with J. and W. McNaught to become Petrie and McNaught

Manchester Archives: The company was established in 1814. Their main product was steam driving engines for cotton mills. In addition their foundry produced iron, bronze and brass castings. The firm was acquired by John Holroyd and Co. Ltd. in 1907. Minutes of Board of Directors, 1891-1933 (PC) and 1932-1941; register of directors of Petrie and Co. Ltd., 1907-1941 (PC); wages book, 1814-1822; inventory and valuation of Phoenix Engine Works, Rochdale, 1919 (JH); patents, 1840s and 1850 and notes on patents; reports, tenders etc. relating to steam engine installations, 1890-1908; memorandum of agreement relating to foundry, 1840; photographs of Petrie companies staff, workers and steam engines, circa 1910 and no date (JP and PC); published material relating to Petrie beam engines, circa 1820 and 1841; paper on steam engine building in Rochdale, 1943; notes on early history of Petrie companies.