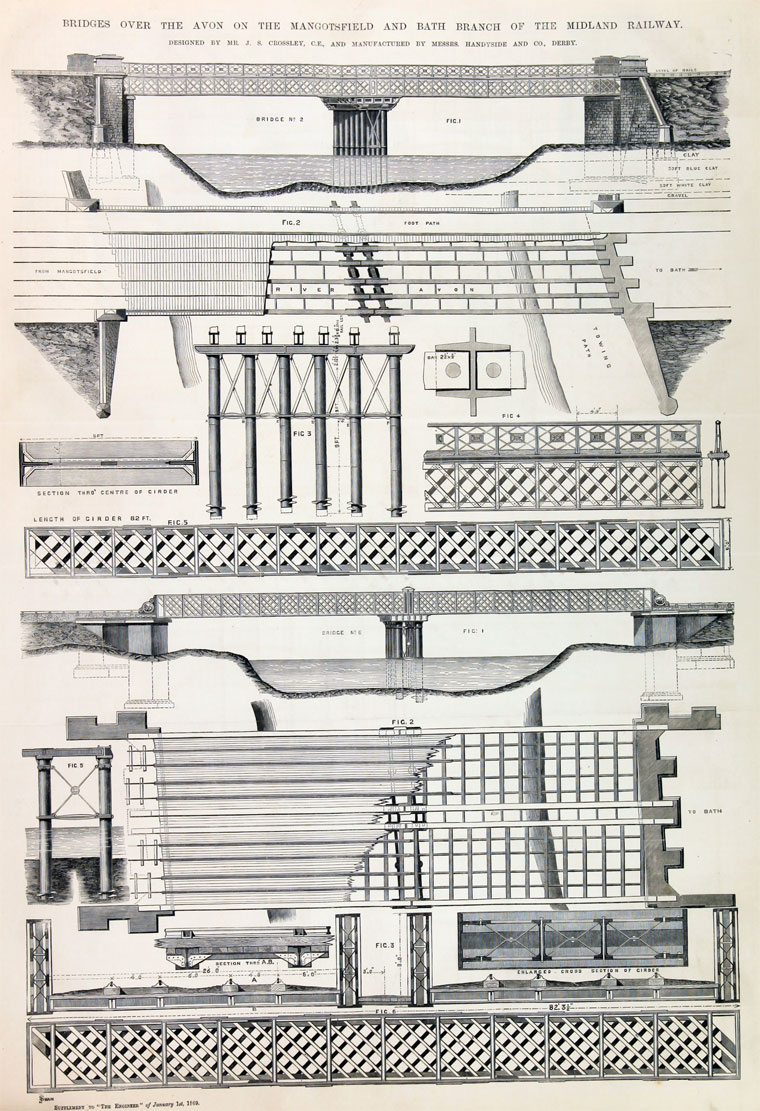 John Sydney Crossley was born at Loughborough, in Leicestershire, on Christmas Day, 1812, and was left an orphan when only two years old.

At an early age he was articled by his guardian, Mr. Staveley, architect, of Leicester, to that gentleman’s son, Mr. Edward Staveley, then engineer to the Leicester Navigation Company.

In 1832 Mr. Edward Staveley went to America, and Mr. Crossley was appointed engineer to the Canal Company, a connection that continued, first as engineer, and afterwards its a director, up to the time of his death.

Mr. Crossley’s experience on railway work commenced in 1832 and 1833, when he was engaged under the late Mr. W. A. Provis, M. Inst. C.E., upon the parliamentary surveys of the Leicester and Swannington Railway.

In 1835 he was employed under the late Mr. Vignoles, Past-President Inst.C .E., in connection with the preliminary work for the Midland Counties Railway.

After this he was not again associated with railway work until 1845, when he was occupied on the surveys for the South Midland Railway.

In 1846 Mr. Crossley was concerned in the parliamentary work of the Leicester and Swannington extension of the Midland railway, under Charles Liddell, the engineer-in-chief; and subsequently on the construction of the line from Ashby to Coalville, of the deviation from Coalville to Leicester, and of the stations from Burton to Leicester. The carrying out of these works lasted until 1851, when Mr. Crossley was engaged under Mr. Hawksley, Past-President Inst. C.E., for the Leicester Waterworks Company.

In September 1852 Mr. Crossley commenced the surveys of the Leicester and Hitchin branch of the Midland Railway, the parliamentary plans for which were deposited in that year; but, owing to the intense application bestowed on this work, on the 30th of November, 1852, he was seized with a paralytic stroke in Mr. Charles Liddell’s office, and his state was considered hopeless for some time. Careful nursing, however, brought him through this illness, and in September 1853 he had so far recovered, that he was able to assume the position of resident engineer on the Leicester and Hitchin railway, under Mr. Charles Liddell.

The carrying out of the works on this line were not completed until 1857, when Mr. Crossley was appointed resident engineer to the Midland Railway Company, which led, in 1858, to his becoming engineer-in-chief to the same company. In addition to discharging the duties of maintaining the permanent way and stations, Mr Crossley was engaged in obtaining parliamentary powers for, and in responsible charge of the execution of the works of, the following lines and branches for the company: The Erewash Valley extension from Pye Bridge to Clay Cross; the Cudworth and Barnsley, Duffield and Wirksworth, Mangotsfield and Bath, Yate and Thornbury, Derby, Melbourne, and Breedon and Ashby, Stenson and Weston, Mansfield and Worksop, and the Ambergate and Codnor Park branches; the Trent and Derby curves; the Radford and Trowele branch; the Bristol Junction lines; the Gloucester to Berkley new docks; the Trent to Leicester widening; the Shipley and Guiseley branch; and the Settle and Carlisle Railway - constituting in all about 225 miles of passenger lines, in addition to colliery branches, junction curves, brewery lines at Burton, and sundry minor works. The capital expended on these lines and branches has been estimated at between seven and eight millions sterling.

Besides the works over which Mr. Crossley had direct control, there were many undertakings of which he was joint engineer; among these may be mentioned the Otley and Ilkley, the Ashby and Kuneaton, the Cheshire lines, and the Furness Extensions railways. Of all these, the greatest engineering work was the Settle and Carlisle railway, 72.25 miles in length. This had to be made through a difficult country, at great disadvantages, owing to the bad climate, the scanty population, and the absence of labour in the district. This most important branch of the Midland railway was, however, opened for passenger traffic on the 1st of May, 1876, when the directors of the company testified their satisfaction at the way in which the work had been carried out by presenting Mr. Crossley with a handsome gift, and by appointing him joint consulting engineer to the Company, on resigning the office of chief engineer in April 1875.

About the same time he was also elected consulting engineer to the Leeds and Liverpool Canal Company.

During the later years of his life Mr. Crossley was only engaged on occasional work for railway and canal companies. Noted for indefatigable power of will, for the utmost exactitude in all details, and for his perfect honesty of intentions and fairness in action, his services were simply invaluable. His success was entirely due to his own exertions, and to a power of attaching subordinates to him, so that with their loyal assistance he was enabled to overcome all difficulties in carrying out the many works of which he had charge.

In the committee rooms Mr. Crossley was well known as a witness; and an eminent counsel, now on the Bench, expressed his regret, to a mutual friend, that his promotion prevented him from having any further encounters with Mr. Crossley before a committee.