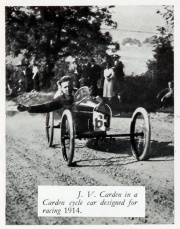 1892 February 6th. Born in London, Carden was a talented, self-taught engineer, with an ability to put his ideas to practical use.

1914-16, he ran Carden Engineering Co‎ that manufactured light passenger-cars under the brand Carden. The company's first model was a cyclecar, with seating only for the driver.

WWI Served in the Army Service Corps and gained the rank of Captain, acquiring experience with vehicles such as tracked Holt tractors.

After the war, he returned to car manufacturing but sold his original design and factory to Ward and Avey who renamed it the AV.

He then designed a new cyclecar and started manufacture at Ascot but at the end of 1919 sold the design to E. A. Tamplin who continued manufacture as the Tamplin car.

A further design followed with a two seat fibreboard body. Carden even sold one of these to King Alfonso XIII of Spain before selling the company to New Carden Light Car Co in 1922 who renamed it the New Carden.

What brought the pair real success was a tankette design: the first Carden-Loyd One-Man Tankette, which was designed in 1925. In the next two years, it was developed into Marks I, II and III, and later, two-man tankette models Mark IV and Mark V. All were built in small numbers but were very promising, and, as a result, Carden-Loyd was bought by Vickers-Armstrongs in March 1928. Carden himself was employed by Vickers as the technical director. The pair continued developing their tankette model, eventually creating their best-known design, the Mark VI. It became the first successful design for that vehicle type in the world, and a classic one, several hundred being produced and exported to 16 countries. Many foreign tankette models developed later were said to be inspired by the Mark VI.

The pair also developed the world's first amphibious tank, the Vickers-Carden-Loyd Amphibian Tank, and played a role in the development of the Vickers E tank model.

Aside from tanks, Carden and Loyd also developed several light artillery tractors and carriers, including the VA D50 model, which was a prototype of the Bren Carrier.

1931 Carden first experienced flight. This sparked his interest and he learned to fly. This led him to experiment with modifying various aircraft to reduce the noise experiences in flight. He also built an ultralight plane based on the French "Flying Flea", using a modified Ford engine uprated from 10 bhp to 31 bhp.

In 1935, Carden started Carden Aero Engines, an aircraft engine manufacturer. A partnership with L. E. Baynes led to the founding of Carden-Baynes Aircraft, which produced gliders of Baynes' design fitted with auxiliary engines.

1935 December 10th. Killed in an air crash near Tatsfield, Surrey, while flying on a Sabena airliner