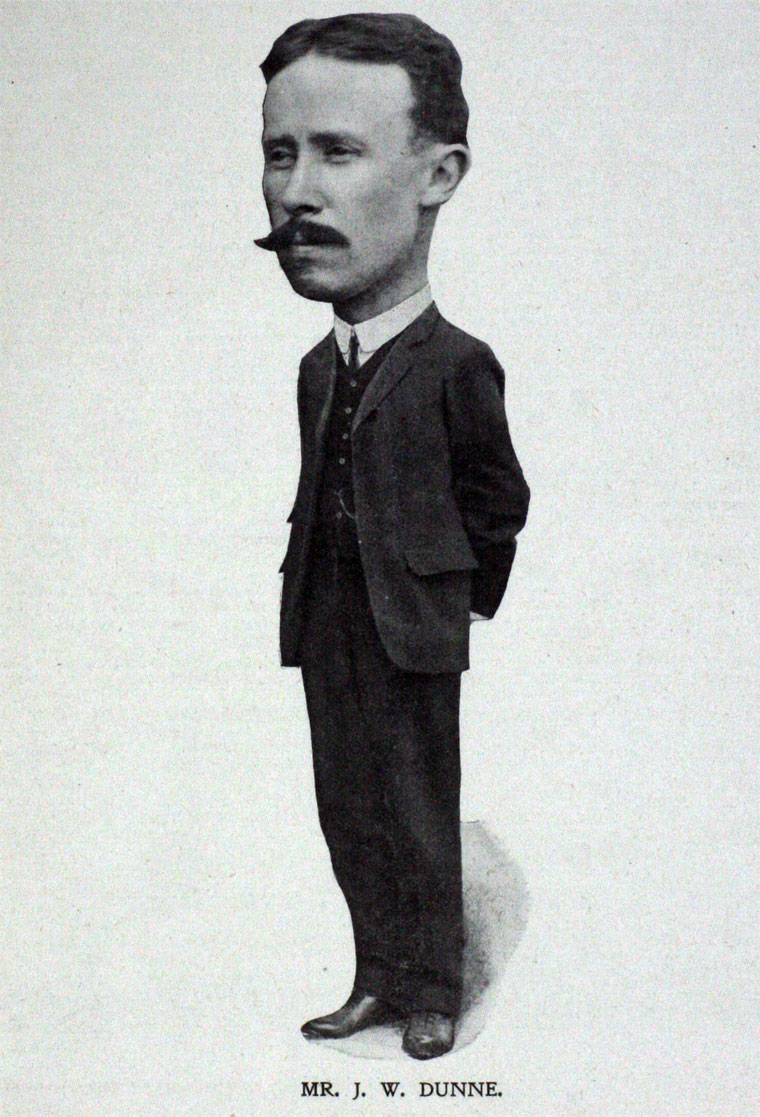 John William Dunne (1875-1949) established his career as an aeronautical engineer working on several early military aircraft. A soldier in the Boer War, Dunne worked on tailless designs in the early years of the 20th century, producing inherently stable aircraft.

1881 Living in Leamington Priors with his parents[1]

He was brought up in South Africa; at the age of six he had a serious accident which confined him to bed for three years. He read a great deal as a child and later said that he read Euclid as easily as an adult reads a novel.

At seventeen he became a pupil on a farm.

Served with the imperial yeomanry in the South African War

1906 He showed his design to Colonel Capper, of the Army Balloon Section. Col. Capper, however, asked for a biplane, so a biplane version was designed and built at Blair Atholl.[2]

Unlike the Wright brothers, Dunne aimed at maximum stability so that, on a straight course at least, the controls could be locked and the aircraft "fly itself." He considered the monoplane to be better than biplane but low wing loading was more readily achieved with a biplane and, as mentioned, Col. Capper had asked for a biplane. This was tested secretly at Blair Atholl in 1907 and 1908 - it rose under its own power, and gliding was successfully accomplished.

1909 After the War Office discontinued funding for Dunne's work, he proceeded to develop his ideas privately; he took out patents to protect his invention[3]

1910 the D.5 aircraft was the first to be built by the Short Brothers for the Blair Atholl Aeroplane Syndicate[4]. Like its predecessors it was a biplane with highly-swept wings driven by twin pusher propellers. It had a much more powerful engine. In the summer of 1910, it was piloted on its first flight by Dunne himself.

Two demonstration flights were made over the flying field at Eastchurch, Isle of Sheppey, on December 20th, 1910. The flights were observed, on behalf of the Royal Aero Club, by Orville Wright and Mr. Griffith Brewer. On the second of the two flights a typewritten statement by Mr. Griffith Brewer was handed to Lt. Dunne, who was asked to make notes on it during the flight. The statement was on very thin paper, making it impossible for Dunne to write notes on it without using both hands. The Dunne biplane was undoubtedly stable.

1911 Designed and built a monoplane with a 50 h.p. Green four-cylinder water-cooled engine. The wingtip flaps were rudders and elevators as well as ailerons. The wing tips were down-turned and carried the controlling surfaces rather than using vertical control surfaces as he had done in the biplane designs. A characteristic feature of this machine was the absence of a tail and the V-plan form of the wings, which also had a varying angle of incidence from root to tip.[5]

1912 Successful tests of the "Perodactyl" were conducted on Salisbury Plain but the War Office were not interested.

c.1913 a French syndicate was formed and Dunne assigned the relevant patent to them but attracted criticism at home for handing over the rights.

Although he did not design further aircraft, he continued to take an interest in developments in aviation.

After experiencing a precognitive dream of the 1902 eruption of Mount Pelée, Martinique, Dunne became seriously interested in the nature of time. Through years of experimentation with precognitive dreams and hypnagogic states Dunne posited that our experience of Time as linear was an illusion brought about by human consciousness. Dunne argued that past, present and future were in fact simultaneous and only experienced sequentially because of our mental perception of them. It was his belief that in the dream state the mind was not shackled in this way and was able to perceive events in the past and future with equal facility. In 1927 he published "An Experiment with Time".

1928 Married Hon. Cecily Twistleton-Wykeham-Fiennes; they had a son and a daughter.

This British pioneer achieved automatic stability, two-control flying, and tricycle undercarriages, features which were not destined to reappear for many years.

These were secret tests carried out by the British government into an early flying machine. They were held in 1906-8 on the Duke of Atholl's estate at Glen Tilt. The aircraft was a Dunne. L. D. L. Gibbs flew the aircraft in 1908.