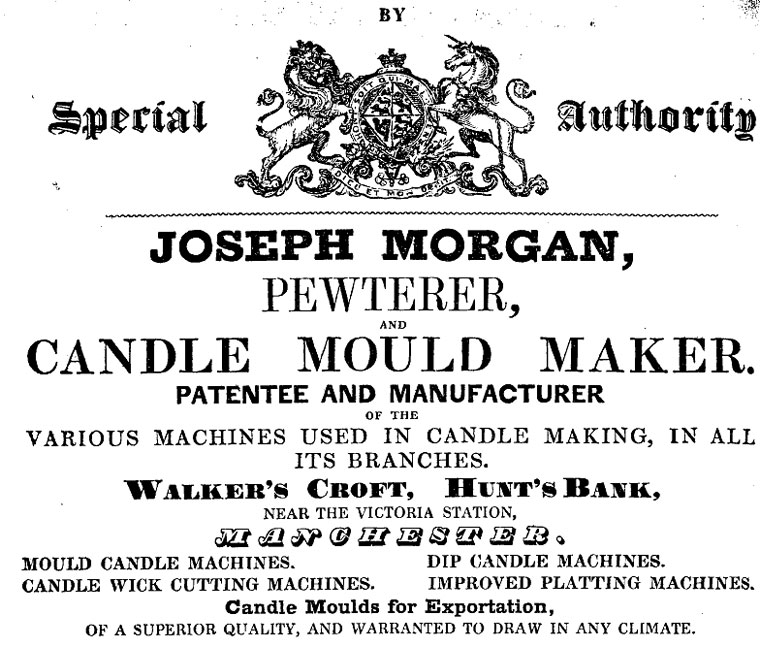 Joseph Morgan was a Pewterer and candle mould maker and moved to Manchester in 1828 but in 1834 he patented a Candle making machine which revolutionised candle making (". . with three men and five boys will manufacture two tons of candle in twelve hours") - he improved and gained other patents in following years and extended his businesses to London and Birmingham - he himself died in 1882 but the business continued under one of his sons.

1847 An advert gives the address as Walker's Croft, Hunt's Bank. Reference to the 1849 OS map shows that this would be one building in a narrow row between Walker's Croft Cemetry and the River Irk, close to Ducie Bridge.

1862 ‘A prize medal has also been awarded to the very excellent specimens of candlewicks exhibited by Mr. J. Morgan, Manchester (3685). The display of these useful articles is very tastefully arranged, and the goods have been highly commended by those best able to appreciate their value.’ [1]

1903 Joseph Morgan and Son merged with James Crossley and Son of Ripley, Derbyshire to become Morgan Crossley and Co.