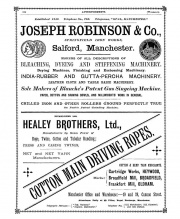 1854 'WALTER YOUNG, DECEASED.— All persons having claims upon the estate of WALTER YOUNG, late of Salford, in the county of Lancaster, millwright and engineer, deceased, are requested to forward the same to Mr. Joseph Robinson, of the Springfield Ironworks, In Salford aforesaid. And all persons indebted to the private estate of the said Walter Young, are requested to pay the amount of their respective accounts to the said Joseph Robinson.—By order of the Executors, THOMAS LEEMING, Solicitor.'[2]

1896 'FIRE THIS MORNING. Shortly before three this morning a fire broke out at Messrs. Joseph Robinson and Company's Springfield Iron Works, in Senior-street, Salford, and for a time appeared to be of an alarming character, owing the fact that the outbreak occurred in some wooden structures used as moulding and fettling rooms. The Salford Fire Brigade, under Superintendent Bentley. were early on the scene, and by four o'clock had completely mastered the flames, and, though valuable property was destroyed, the damage to the plant and work in hand may be roughly estimated to amount to couple of hundred pounds.[4]

The 1915/1922 O.S. Map[5] shows Springfield Iron Works at the junction of Springfield Lane and Senior Street. It was hemmed in to the north and east by a right angled corner of Greengate Mills. The extent of the works premises is not clear, but the identified main building and yard cover an area of approx 200ft by 200ft. A separate building alongside may have been part of the works.