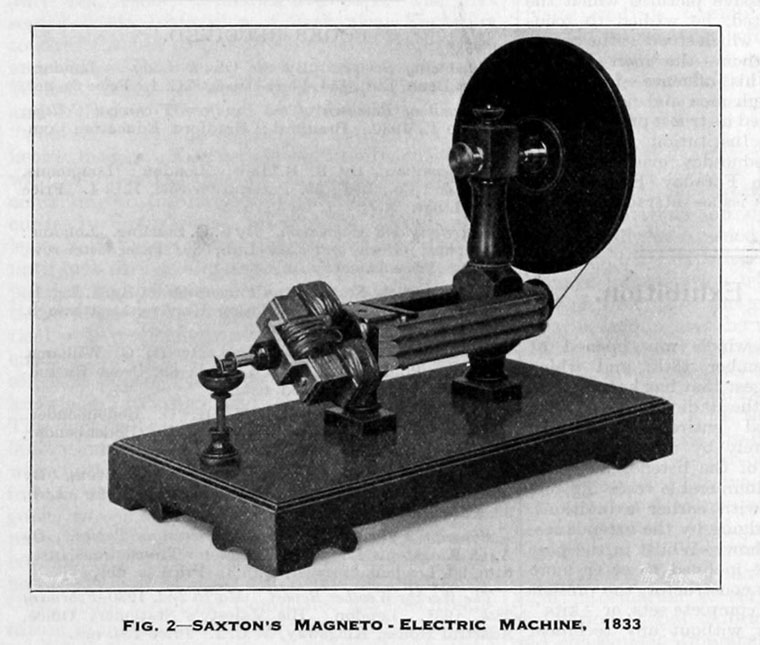 Saxton magneto-electric machine and ancillary equipment on display at the National Museum of Scotland. The equipment was made by W. and S. Jones of London, presumably after 1850, as the label in the box has the pre-printed part of the date 185 .

Spent several years in England, where he was employed at the Adelaide Gallery of Practical Science, where he became acquainted with some of the great scientists and engineers of the day. While there, he produced a hand-driven dynamo, which he demonstrated for the first time at the British Association meeting at Cambridge in 1833. He produced brilliant electric sparks, decomposed water, produced an arc of electric lights between charcoal points, and gave eletric shocks.

He was responsible for a wide range of inventions

1833 Saxton developed a magneto-electric machine, in which coils of wire fixed in front of the poles of a horseshoe magnet were rotated to produce an electric current. The machine was demonstrated at the Cambridge meeting of the British Association for the Advancement of Science in June and later put on display at the Adelaide Gallery. Francis Watkins helped to stave off charges that Saxton had been guilty of plagiarizing the machine from one developed by the French instrument maker Hippolyte Pixii.[1]

Later Saxton publicly accused Edward M. Clarke of piracy, alleging that his machine was simply a variation of Saxton's own invention and that no experiment could be conducted with it that could not equally well be carried out with Saxton's.

1837 Left London for a post at the US Mint in Philadelphia.

The above information is condensed from a 'Memoir of Joseph Saxton, 1799-1873'[2], where much more information will be found.

1833 A very ingenious proposition for making use of the power of a horse, moving at his slow working pace, to communicate a high velocity to carriages upon a railway, through the medium of a new arrangement of pulleys and ropes, was invented by Joseph Saxton, of London, for which he obtained a patent, on the 20th June, 1833.