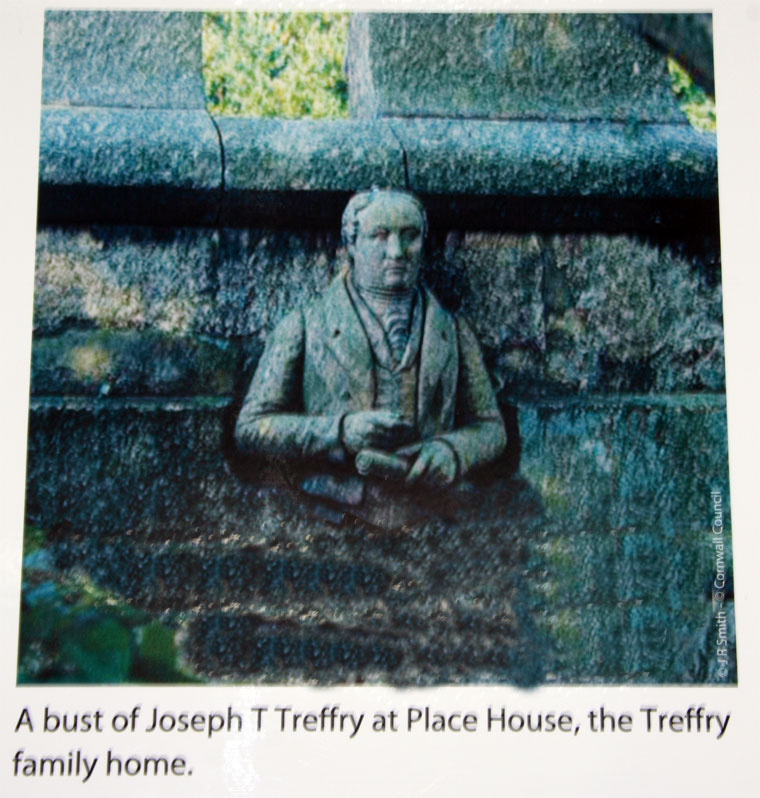 Joseph Thomas Austen (1782 – 1850) was an engineer and mining industrialist who became a significant landowner in Cornwall. He changed his name from Austen to Treffry by deed poll.

1779 His mother and her sister Jane inherited the Treffry estate in Cornwall following the death of their father and their brother.

1782 Joseph Thomas Austen was baptized at St Andrew's Church, Plymouth on 1 May, the eldest child of Joseph Austen (d. 1786), brewer and sometime mayor of Plymouth, and his wife, Susanna (d. 1842), daughter of Thomas Treffry of Place, Fowey.

1786 After the death of her husband, Susanna and her children moved to Place.

Treffry built a new quay in Fowey to take larger vessels for the export of tin, the major industry of Cornwall. As a result he became a partner in the Wheal Regent copper mine at Crinnis near Par.

c.1815 Joseph added to the estate's shareholdings in local copper and tin mines.

By 1820 he had acquired control of Wheal Treasure. He became manager of Lanescot Mine.

1822 After he amalgamated the two mines and took full control, Fowey Consols became the most productive mine in Cornwall, employing 1,680 workers.

1836 bought the pier and harbour of Newquay for shipping lead from the East Wheal Rose mine, and china clay and stone from his quarries. He bought mines in the area of Goss Moor and planned to link them by a railway system.

1837 He began developing a tramway from Ponts Mill to Newquay, constructing tracks to Bugle, which included building Treffry Viaduct to carry both tramway and water to power his mines.

1840 Brought another large copper mine, Par Consols, into production.

Treffry and his steward William Pease built an inclined plane tramway from the canal basin, past the Carmears Rocks, to the level of the top of the valley, then a level run through Luxulyan and on to its terminus at the Bugle Inn near Mollinis. This required a high-level crossing of the river, for which they built Treffry Viaduct, which is 650 feet (198 m) long and 100 feet (30 m) high. Built of stone from the Carbeans and Colcerrow quarries, the lines from the quarries to the viaduct were the first parts of the tramway to be operational. The tramway was completed in 1844.

Treffry served as vice-president of the Royal Cornwall Polytechnic Society from 1849 until his death of pneumonia in 1850.