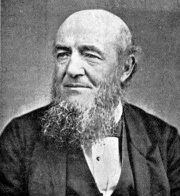 1818 November 29th. Born the son of Josiah Gimson, Senior, a builder of Welford Road, Leicester and his wife Mary. Baptised on the 28th January 1819 at the Salem Chapel Free School Lane - Independent, Leicester. [1]

1881 Josiah Gimson established the Secular Hall, in Humberstone Gate. The Hall did not belong to the Secular Society but was built by The Leicester Secular Hall Co. Ltd. and all the shareholders were Secularists, with Josiah holding the largest number of shares. This company had been in existence for about ten years, gradually gathering sufficient money to build the Hall

JOSIAH GIMSON was born at Leicester on 29th November 1818.

After having served his apprenticeship to Messrs. Cort & Co., ironfounders, he started in business with his brother Benjamin under the name of Gimson & Co., as general engineers and machinists. During the early period of their partnership, some thirty years ago, the elastic-web trade commenced, and they devoted their attention to manufacturing the special machinery it required, which for many years formed by far the most important branch of their business.

Of late years that particular trade having been partially lost to Leicester, Mr. Gimson turned to the construction of special machinery for the boot and shoe manufacture, which has developed to a great extent in that town; he introduced improved machinery for the purpose, and machinery of this class has since continued to be extensively made by his firm.

Later Messrs. Gimson & Co. added ironfounding and boiler-making to their business, building extensive works furnished with every facility in the shape of machine-tools and appliances for turning out a large quantity of work; they also gave more attention to engineering proper, making a special feature of large pumping engines for water and sewerage works.

After his brother's death in 1862, Mr. Gimson carried on the business alone, the title of the firm not being altered.

In the autumn of 1880 he had a serious illness, from which he apparently recovered, and resumed his duties; but his strength was impaired, and in the spring of 1883 he again became ill, and gradually sank until his death took place on 6th September 1883, in the sixty-fifth year of his age.

He became a Member of the Institution in 1878.

His son Sydney wrote: On September 18th 1881, Michael Wright died. He was a very close friend of my father's and the two had been for many years associated in work for the Secular Society and in the building of the Hall. I have always believed that he and my father were the two outstanding personalities in the Society. Mr. Wright was at one time manager to the firm of Hodges and Sons, Elastic Web Manufacturers on the Welford Road. He had a house by the side of their gates and we lived next door to him (No.39) until 1871. Later he started an Elastic Web business of his own in Leicester, but soon removed to Quorn where the business flourished and has continued to flourish up to today, under the management of his sons and grandsons.