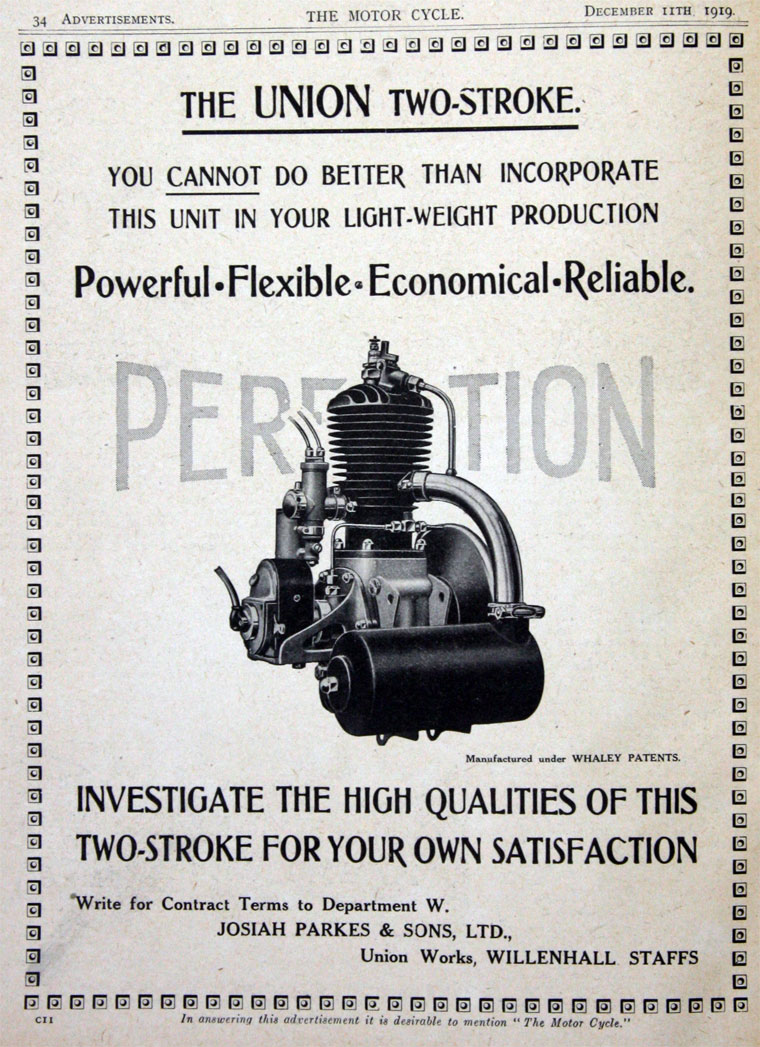 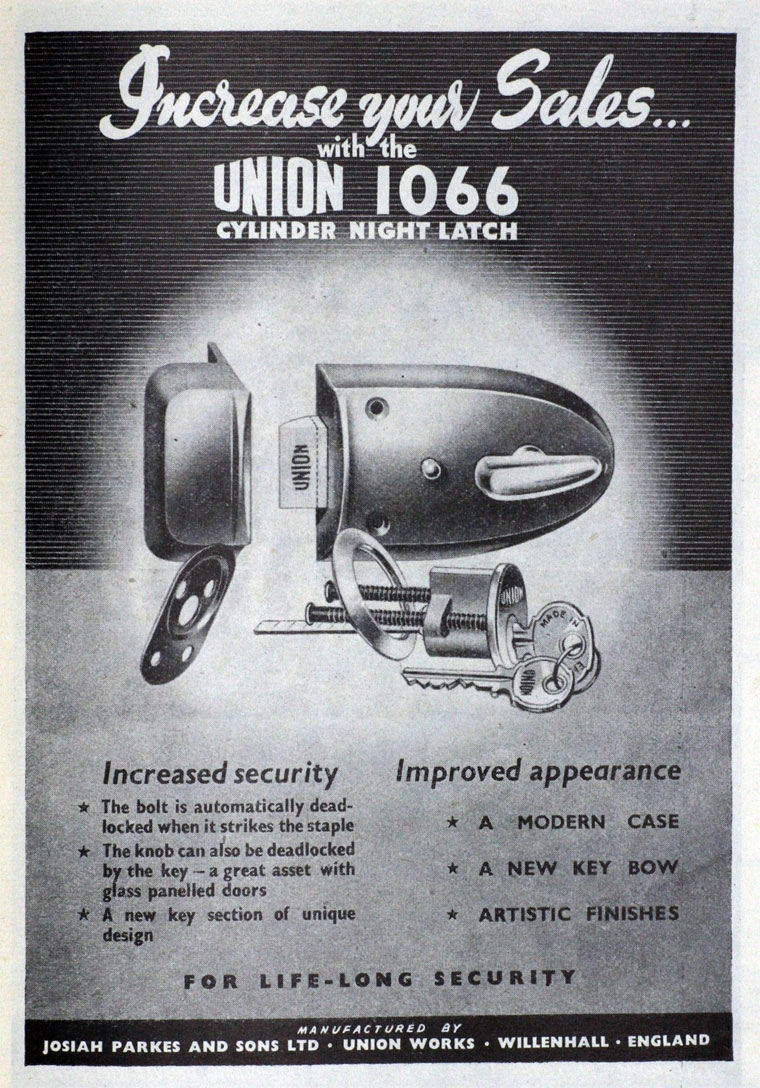 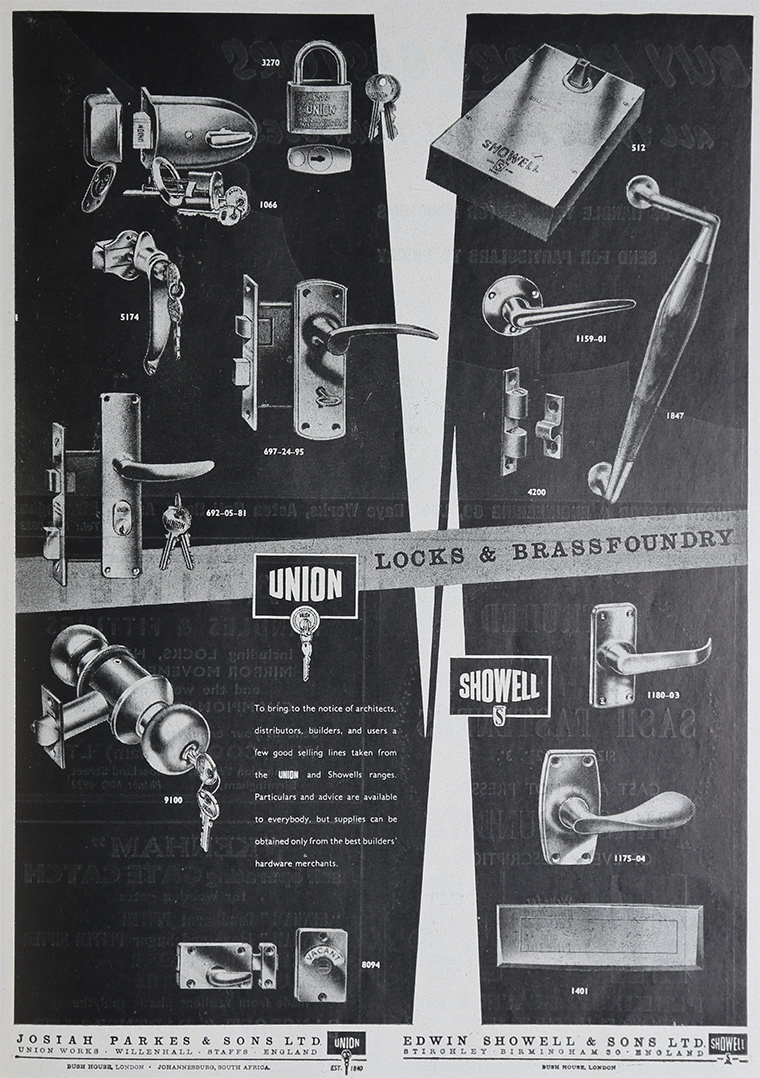 1961. Josiah Parkes and Sons and Edwin Showell and Sons.

The Parkes family were originally from Gornal. The eldest brothers, William (born 1822) and Richard both served apprenticeships as locksmiths in Willenhall. Josiah Parkes (born 1824) was apprenticed to Hickman's Iron Works in Bilston.

c1840 The three brothers set up in the ironmongery trade about 1840 in premises at 28, 29 and 30 Doctor’s Piece. Josiah continued to work at Hickman's, only helping the firm in the evenings.

The trade was considerable, as iron at the time was the material most commonly used by lock and key makers throughout the land. The business grew in volume and scope and new premises were taken in Union Street. Merchanting was done in iron and a great variety of general goods, from mole traps to clothes' horses, from ash pans to carpenters’ tool baskets and, of course, locks.

Richard did not stay with the firm but it is not known when he left. William had an ironmongery business at 9 Union Street.

c1850 Josiah and his wife, Catherine, moved to premises at 3, Union Street and Josiah began working full-time, with Richard in the ironmongers.

1851 William and Josiah were in partnership and were advertising in the local papers and trade journals as "William and Josiah Parkes, Iron, Steel and Wire Merchants", Union Street. The partnership made locks and other hardware but they also traded in those goods, acting as factors. They would supply the raw materials to other locksmiths and buy back the finished products from them, selling them on to wholesalers and retailers. The brothers were obviously successful in this trade and in the 1850s were able to take on three apprentices.

1860s The Parkes brothers began to concentrate more on manufacturing and merchanting locks. An advertisement in the Wolverhampton Guide of 1864 described them as "general merchants and manufacturers of all kinds of rim, mortice, pad locks, bolts and latches".

1861 The brothers were able to move their families to better premises. William and his wife, Elizabeth, and their four children, moved to 78 Union Street. Josiah and his wife and five children moved to 77 Union St. The iron warehouse and shop lay between the two houses.

1868 The original business was dissolved when his son, William Edmund (1855-1920), joined Josiah, trading as iron merchants and hardware factors. They moved into 28 Doctor’s Piece. William Edmund concentrated on the hardware section and Josiah looked after the iron merchanting.

As the business grew, the Parkes children came into the Company. William had three sons: Samuel, Josiah and William Fletcher, who all joined as iron merchant's clerks. Josiah Parkes had five sons, who were all younger than their cousins. Friction developed between the two families about who was going to control the business.

To resolve the problem William and Josiah dissolved the partnership around 1873 and set up two separate businesses. William and his sons became Parkes, Parkes and Co, but soon both Samuel and Josiah started other businesses, Samuel as a hardware merchant in New Road and Josiah as a brass founder in Wood Street.

By 1880 business was doing well enough for them to employ three men and expand the premises to 18, 29 and 30 Doctor’s Piece. Advertisements from 1884 refer to Josiah Parkes and Sons as "bolt, nut, screw, hinge, latch and lock furniture manufacturers". Josiah Parkes Junior and John Parkes both joined the firm.

1885 James Harry, another son of Josiah, joined the firm, when it became Josiah Parkes and Sons.

1888 A new partnership under the same name was established between William Edmund, John and James Harry Parkes. Josiah Parkes Jnr did not join this firm but carried on the iron merchanting business by himself. The youngest son, Ebeneezer Thomas, decided to go into a career in banking.

1889 The other brothers decided to concentrate their firm’s attention on the manufacture of locks and gradually ceased trading in iron and other goods.

1896 When more factories for lock-making appeared, as the lock industry grew in size and importance, Josiah Parkes and his sons recognised the trend, discontinued iron trading and took up the manufacture of locks. The enterprise began in quite a small way and gathered pace in later years. Their first products were stamped with the image of a hose coupling (a product that they also made); this image became the trade mark of Josiah Parkes even when they stopped hardware trading.

1911 Harry George Parkes, son of James Henry Parkes, joined and his younger brother. An important step was taken when the company began the manufacture of cylinder locks and latches. At the time comparatively few were being made in this country.

1913 The company was able to expand and build a new lock shop adjoining the original Union Street premises and employees increased to 100.

WWI. At the beginning of the war trade was depressed due to few government contracts and the decrease in exports. In due course the factory was turned over to the production of munitions.

1917 By then, so many men had enlisted that Parkes, like most other manufacturers in the area, had to employ women workers. When the war ended the women did not automatically lose their employment. Conditions were not easy for women employees - they were not allowed to speak at work and had to meet together to walk home at the end of the day, to avoid attracting men’s attention.

1919 Set up Union Engines to produce Union two-stroke engines which it sold for several years.

1920 With the death of his father, William Cyril Parkes became Chairman and joint Managing Director with his brother, Arthur Josiah Parkes.

1930s The Union Street premises in Willenhall were modernised and a new office block was completed in 1933.

WWII. During the war, skills and machinery were put to essential munitions manufacture, notably grenades, fuses for shells, detonators, etc., as well as locks to secure the spinners of aeroplanes and thousands of padlocks to secure kit bags and numerous other purposes.

1948 Employees totalled 900. Josiah Parkes and Sons (South Africa) was formed, for the purpose of manufacturing Union locks and architectural furniture in South Africa. The factory was based at Fordsburg, Johannesburg.

By the late 1940s there were representatives and agents in over 50 countries worldwide.

1956 The old established business of Edwin Showell and Sons of Stirchley, Birmingham, was acquired. Showells was founded around 1830, and manufactured door springs and architectural brass ware. The principal object of the amalgamation was to enable Parkes to offer builders merchants, architects and the building trade a comprehensive range of builder's hardware.

1964 Cyril Parkes retired as chairman and was succeeded by his brother Arthur who himself retired in 1967.

1984 Became a member of the Racal Group of companies when Chubb and Sons was acquired by Racal Electronics plc.