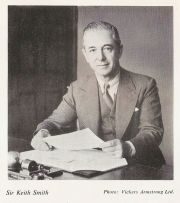 With the passing of Sir Keith Smith at Sydney our Australian Company suffers the severe loss of its Chairman.

Keith Smith was brought up on an Australian sheep station. His parents were Scots but he was born in Australia.

In the first World War he served with the R.F.C. Later he became head of Vickers Limited in Australia, Vice-Chairman of British Commonwealth Pacific Airlines, a Director of Quantas and Tasman Airways and, joining International Combustion Australia Limited in 1934, he became its Chairman.

Keith with his brother, Ross, made the historic, and heroic, first flight from England to Australia in 1919, in a Vickers-Vimy bomber. It is an event, the details of which are worth recalling.

Keith was co-pilot and navigator; Ross was pilot; the other two members of the crew were Sergeants J. M. Bennett and W. H. Shiers, both of the Australian Flying Corps. The flight, which was accomplished in 28 days, won a prize of £10,000 offered by the Australian Government. The twin-engined Vickers, a biplane, had a cockpit completely exposed to the elements, and a minimum of meteorological advice was available to the brothers.

They left Hounslow in bitterly cold November weather, and were at times blinded by rain: at one period their sandwiches were frozen solid. In a tropical rainstorm they had to punch a hole in the flooring to let out the water.

In Siam an aerodrome covered by tree-stumps had to be cleared by convict labour. Here a broken tail-skid entailed day-and-night work before the aircraft could take off again. At Sourabays the airfield was a sea of mud; 500 native matting houses were pulled down to make a runway.

Twice the airmen had to turn out at night to hold down the aircraft in violent gales. On one occasion they could only get airborne by means of Sergeant Bennett sitting on the tail-plane. As the machine moved, he jumped off, sprinted to the front and was hauled into the rear cockpit.

Both these airmen were created K.B.E. in 1919 in recognition of their great effort. Sir Ross Smith was killed at Brooklands three years later when preparing for a round-the-world flight. Of the original crew of the Vickers-Vimy, Mr Shiers is the sole survivor.

Sir Keith Smith was 64 years at his death. In 1924 he married Miss Anita Smith, who survives him."