Large testing machine: Crosshead in foreground, hydraulic ram behind. When pressure is applied, the four tie bars connected to the crosshead pull a moving carriage (see below) towards the ram. On the far side of the carriage there are jaws used for tensile testing,while on the near side are anvils used for compression and bending tests

This shows the moving carriage being positioned for a tensile tensile test. On the extreme right, behind the threaded tie rods, may be seen the jaws used for holding the tensile test piece

The small carriage supports the weights on the steelyard. The scale shows the distance from the pivot 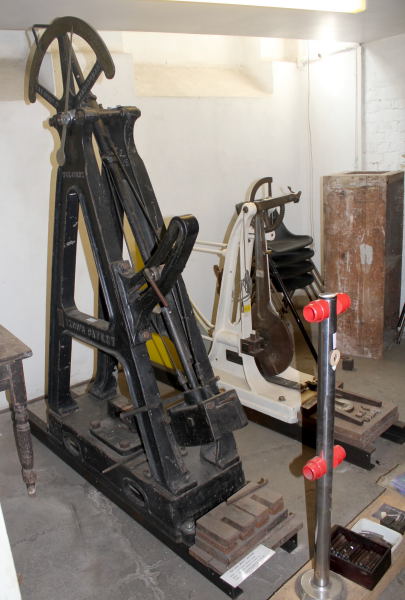 Impact testing machines: Izod, by W. and T. Avery and Charpy, by Chatillon

Hydraulic intensifier by the Hydraulic Engineering Co of Chester. It was used to increase the pressure of water available from the London hydraulic main for the large testing machine 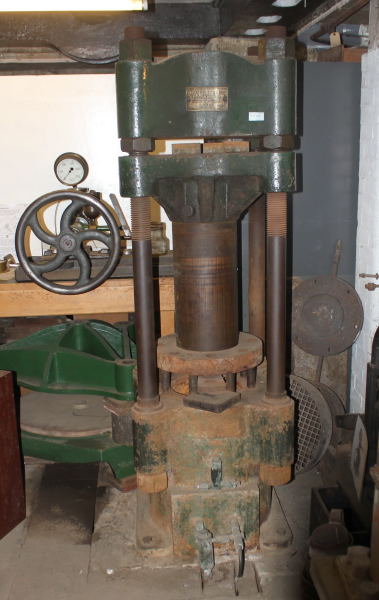 at 99 Southwark Street, London, a short distance south of the Tate Modern Gallery.

The museum has been established to:

It occupies the ground floor and basement of 99 Southwark Street in the Southwark area of London, just south of the Tate Modern gallery (which occupies the former Bankside Power Station.

This building was built in 1874 specifically to house "Kirkaldy's Testing and Experimenting Works". It was a place where experiments took place on materials to determine their strength. This was done primarily using David Kirkaldy's own design of testing machine, located in an area that was a hive of industry, and also close to the headquarters of industry, the engineering institutions, Government and Parliament.