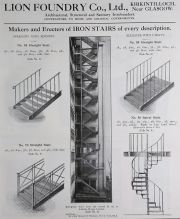 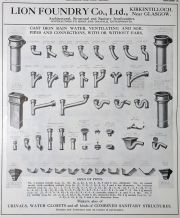 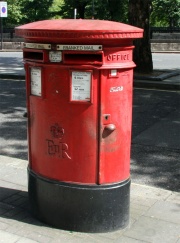 1880 three staff from the Saracen Foundry left the company and set up The Lion Foundry in Kirkintilloch as Jackson, Brown, Hudson and Cuthbert - James Brown had been a clerk in the order department, James Jackson a Salesman, and Robert Hudson a fitter at Saracen.

1881 A key figure from Saracen joined Lion Foundry: William Cassells who left his post as designer and draughtsman at Walter Macfarlane and Co to take up the same post at Lion. The design references are apparent in the work of the Lion Foundry thereafter. Cassells was succeeded by James Leitch was responsible for many of the Art Nouveau designs produced by the company, and a specialism only offered by Carron Co (ironically Lion Foundry outlasted Walter Macfarlane and Co by 20 years, surviving in Kirkintilloch until the early 1980's).

1881 Jackson left to set up Jackson, Elphick and Co in Larkhall.

1893 the company became a limited liability company with the formation of the Lion Foundry Company Ltd. The name is still registered, although has been dormant for many years.

Lion Foundry produced ornamental cast ironwork like its contemporaries - railings, crestings and terminals in its early days, but quickly started to manufacture fountains, bandstands, canopies and larger structures. It produced pattern books like it's contemporaries which grew larger over time as the company developed.

1898 The first large project of note was the construction of the County Arcade in Leeds between 1898 and 1900, Lion supplying all of the cast and wrought ironwork. The foundry developed a reputation for theatre projects which can be seen in work produced with Frank Matcham such as the London Hippodrome (1900), and Finsbury Park Empire in 1908.

From 1918 to 1950, Lion Foundry vied with Walter MacFarlane and Co Ltd in the quickly developing field of prefabricated cast iron buildings, primarily facades.

1921 a commission was received for Adelaide House by London Bridge, supplying windows, breast panels and ornamental features. Also supplied was an escape stair which was to become a staple product in later years for the foundry, enabling it's long term survival. Building facades and larger structures became a major part of the foundries work, producing facades for Mappin House in Oxford Street (1908), Unilever House on the Thames Embankment (1931), Lambeth Bridge (1932), and Lothian House in Edinburgh (1939).

The decline in architectural ironwork demand after 1950 saw the company seeking work in engineering casting, but also related to street furniture. This included counter balance weights for fork lifts, and a profusion of covers, boxes and telephone and post boxes for the GPO. These are found across the UK still. More contemporary bus shelters and fire escape stairs were produced extensively.

1977 the company was involved in an early piece of cast iron restoration in 1977 with repairs to the Houses of Parliament involving very much Victorian techniques and patterns,

1980 almost all of the work was for British Telecom (Royal Mail?), with the Foundry winning a contract to manufacture contemporary pillar boxes. This was not enough to sustain the company, and the recession bit hard culminating in closure by 1984.