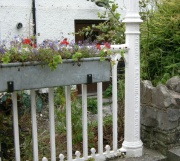 A fine surviving building at the former foundry

Established 1851 by William Thomas of Trefeglwys. He started the 'Railway Works' in Llanidloes c.1860.[1]. John Mills took over the business from his uncle, William Thomas, in 1893 (see 'Historical Information' below). The firm evidently became John Mills and Co (Llanidloes). The extensive premises remain, apparently intact, albeit not as a foundry, in the centre of the town.

See photo: Cast iron lamp post and railings show the maker's name, and also the words 'S. W. Williams County Surveyor Radnorshire. AD 1867'. These have been relocated from a nearby road bridge [2]. Mr. Williams was also involved with W. Thomas in connection with another bridge:-

1867 'Radnorshire Quarter Sessions
THE COUNTY SURVEYOR'S REPORT.
Mr. Williams reported as follows:— I regret to have to inform you that during the past quarter a serious accident occurred at Llandewi Bridge. One of the cast iron moving plates to which the chains are fastened the earth, cracked at the time a heavy laden waggon of coal was passing over the bridge, and very shortly after the chains broke through the masonry, and the entire bridge gave way on one side and fell into the river, and at the same time strained and wrenched the remaining chains in such a manner to render the bridge a complete wreck, so far as regards the suspension portion. The new iron flooring which was put up some time ago is, I am happy to state, quite uninjured. I communicated at once with some of the Magistrates of the district, and I was instructed to put up a temporary foot bridge, which was immediately done. I have carefully considered the question of restoring the bridge, and I cannot recommend that the suspension chains be used again. They have been so strained and injured that it would involve entirely new chains, and I not consider the principle upon which this suspension bridge has been built to have been a good one: they are bad in design and worse in construction. I would beg to recommend the Court to use wrought iron girders which would form the parapets of the bridge as well as support the flooring. I sent sketches and information to two parties requesting tenders ; in the first case I sent to the Worcester Engine Works Company, and they have supplied a sketch and tender for a pair of girders delivered at Penybont station for the sum of £130 10s. 0d., this would be for pair of girders capable of carrying distributed load of 50 tons ; they do not give me a tender for fixing the girders and lifting the flooring, but my estimate for this portion of the work is from £85 to £90. I also applied to Mr. Thomas, of Llanidloes Foundry, who I knew had a pair of spare girders from the Mid-Wales Railway in his possession, which were nearly of the dimensions required, and he has furnished me with a tender, and I find that he will undertake to provide a pair of girders, which will carry distributed load of 100 tons, and them complete, raise the flooring, and provide all the masonry that may be required for the sum £220 10s. 0d. I consider Mr. Thomas's offer the most advantageous of the two for though girders carrying a distributed load of 50 tons would be amply strong enough for all purposes, it is evident that girders capable of carrying a load of 100 tons must be better and will last twice as long as those only calculated for half weight. Great public inconvenience is caused by the bridge being down, and I would venture to suggest that the Court deviate from the usual course in this matter, and allow me to employ Mr. Thomas (as his is the lowest tender of the two, and will be completed in the shortest time) to re-erect this bridge for a sum not exceeding £220 10s. 0d.' The order was given to proceed.[3]

Historical and Biographical Information from 'A Municipal History of Llanidloes'[4]

'William Thomas, iron founder and engineer, filled a large part in the commercial, political, and municipal life of the town. He was one of the men who rose to a position of wealth and influence on the crest of the wave of commercial activity in Wales when the railways and mines were in their full activity. He was the eldest son of a farmer of Llanwyddelan, and was born at Bryncoch in that village. He was apprenticed to Mr. Hughes, of Green Lane, Abermule, wheelwright. The Mayor's father having removed to Cwmcwtta, between Trefeglwys and Llanwnog, he went there too, and commenced a small iron foundry, where he made agricultural implements, and machinery for Dylife mines (in which the Rt. Hon. John Bright had interests). In 1851 Mr. Thomas removed to Llanidloes, and here gained a reputation for the manufacture of lead-mining machinery. The railway boom also came at a time to be of service to our Mayor's industry: he supplied the necessary iron work for the Newtown and Llanidloes Railway, the Wrexham, Mold and Connah's Quay Railway, the Manchester and Milford Railway (or, should we say, Pencader and Trawscoed Railway, the railway of great ambition and small performance ?), and the Neath and Brecon Railway. The business grew far beyond the bounds of the Principality. The Foundry was at one period sold to the Railway Company, but they failed to complete the purchase, and a second time to Lefeaux and Company. For five years it was under the control of Henry Clifton Carver, who retired in 1872.

'Mr. Thomas was elected to the Council soon after he settled in the town, and enjoyed the distinction of being chosen Mayor five times.

'He was made Justice of the Peace in 1881, and was highly respected in that capacity for his integrity and sincerity of purpose. He was for nearly twenty years a deacon of the Calvinistic Methodist Church in China Street. He died at Mid-Wales Villa in August, 1893, at the age of 70 years, and was buried in Dolhafren Cemetery, where a white marble stone marks his grave.

John Mills, ironfounder, was born in Trefeglwys in 1843. He left in 1865 for Wolverhampton to take up a position at the Great Western Railway Locomotive Works, where he remained for seven years. Whilst at Wolverhampton he married Margaret, daughter of Robert Jones, the founder of the Welsh Calvinistic Methodist cause at Wolverhampton, of which church he was made deacon in 1868. He returned to Llanidloes in 1872 as assistant to Alderman William Thomas, his uncle, whom he succeeded as proprietor of the Iron Foundry in 1893.'