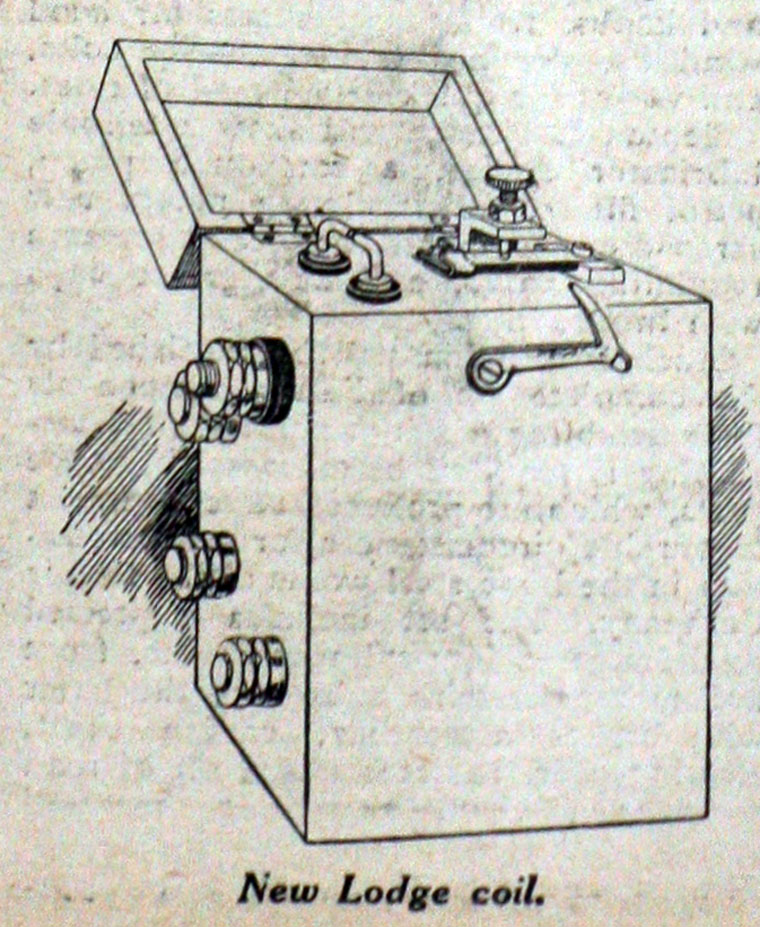 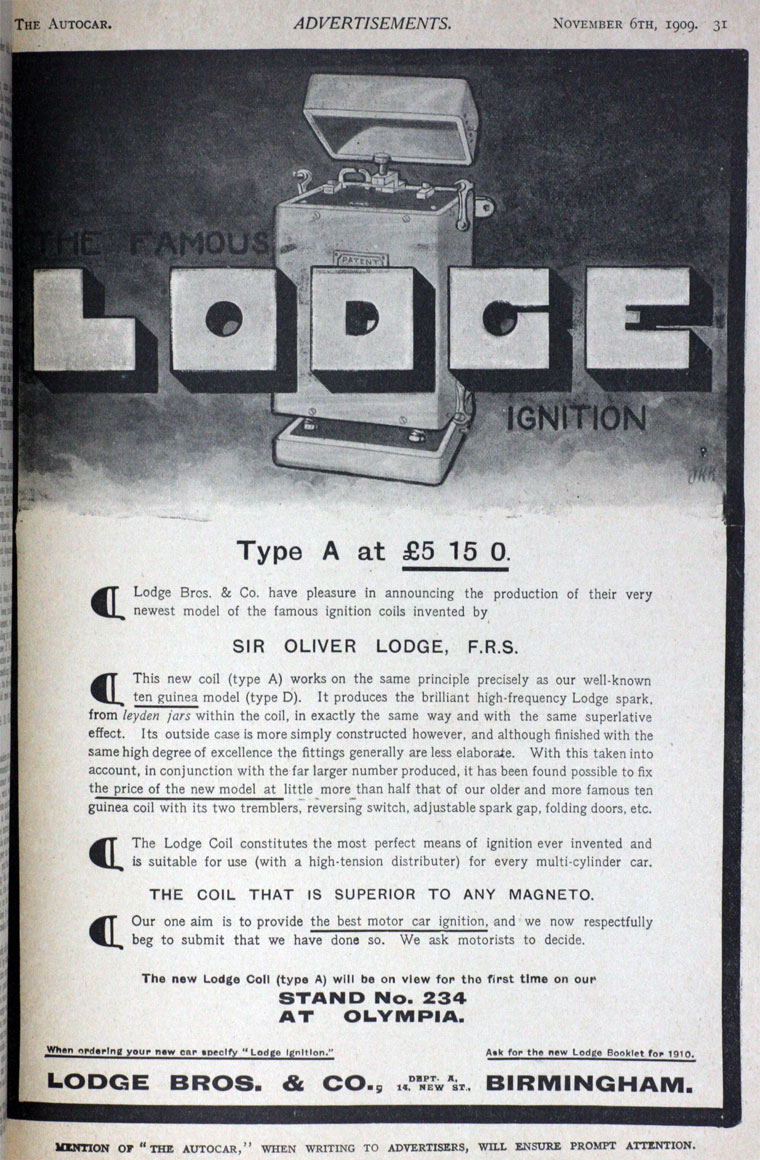 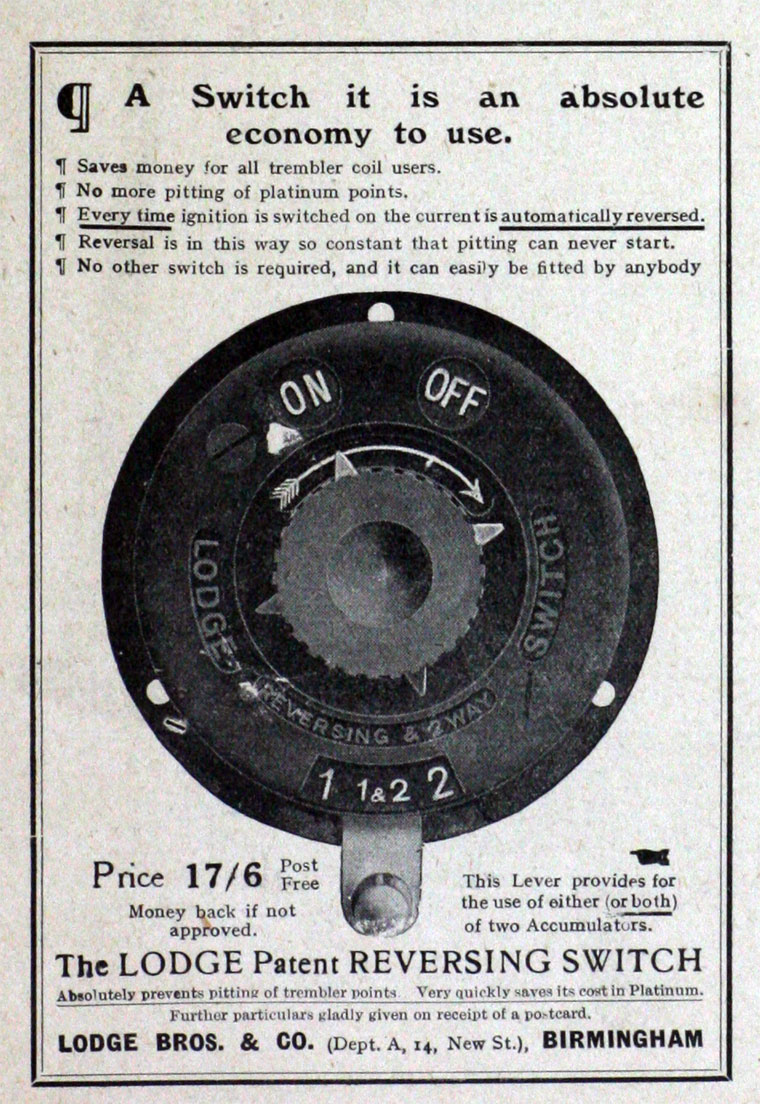 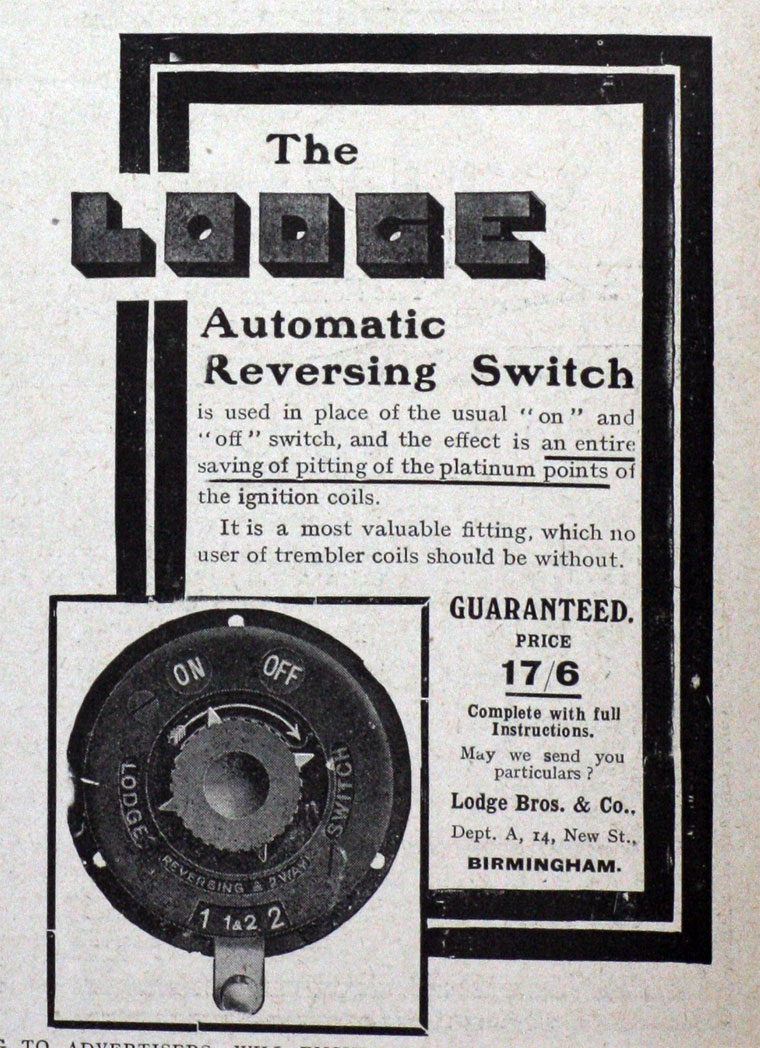 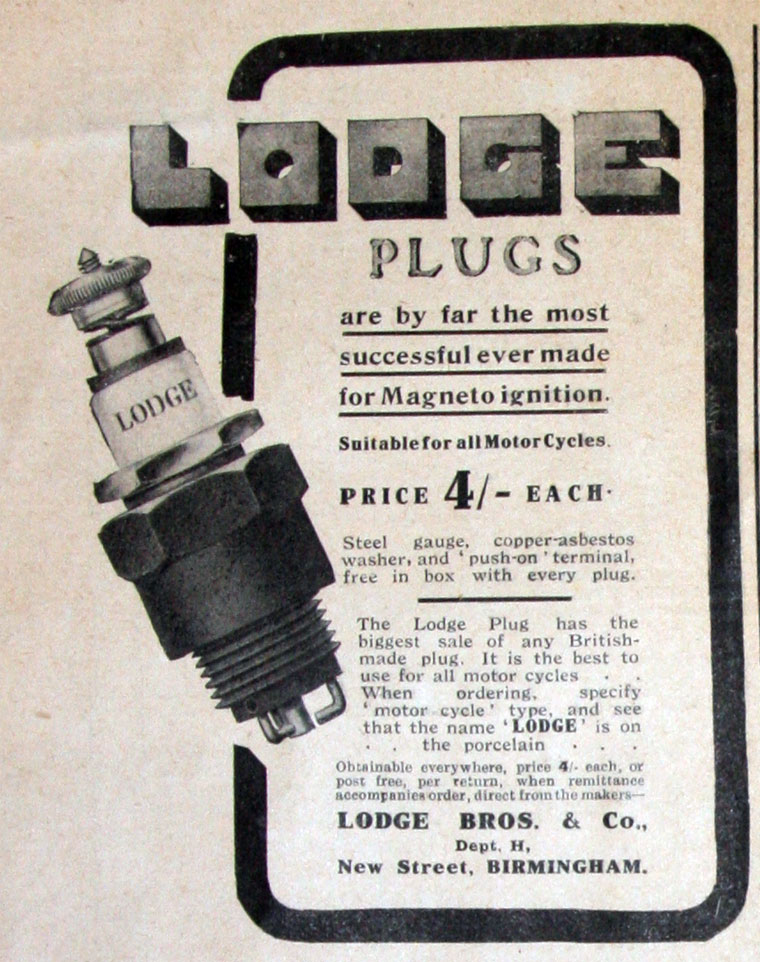 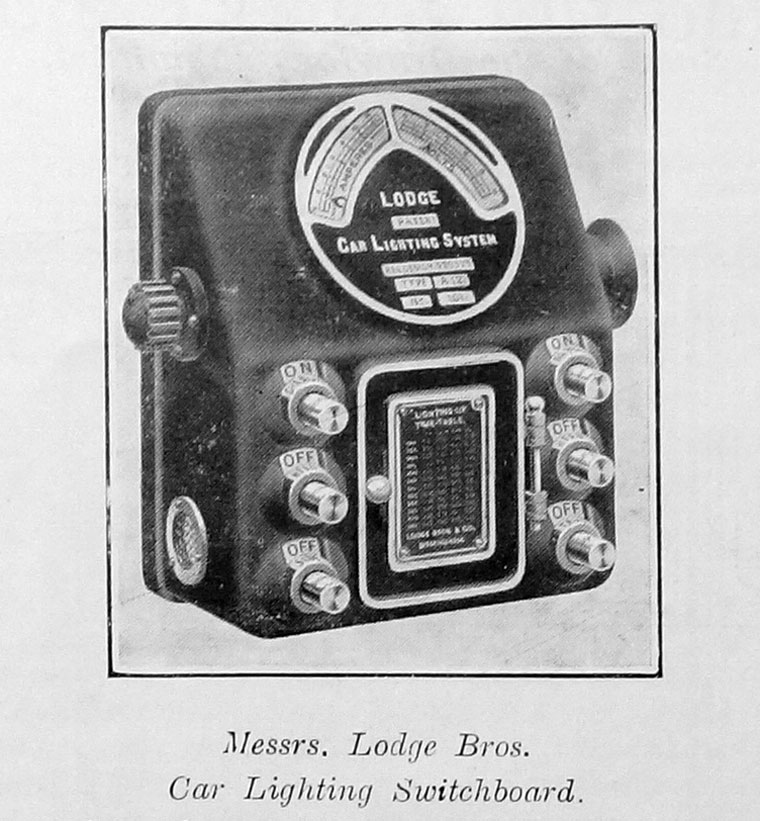 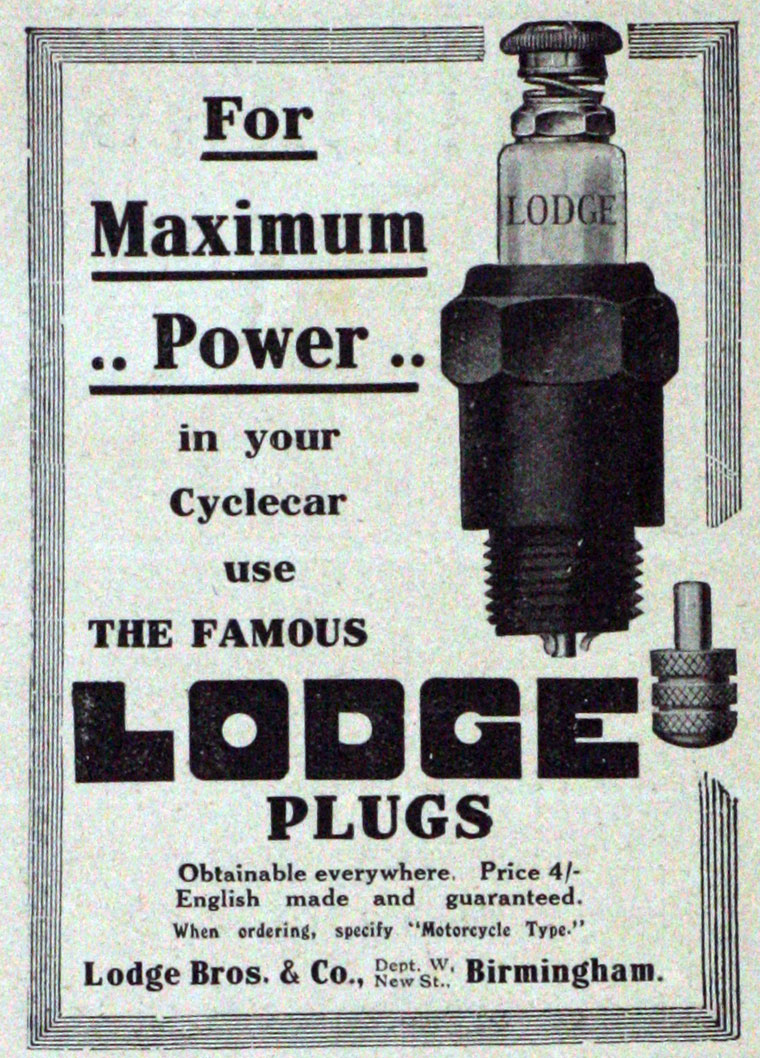 The Lodge brothers were the sons of Sir Oliver Lodge, the famous scientist. Brodie Lodge was twenty-three, and had served five years in the office of a shipping line in Liverpool. Alec Lodge was a year younger, and was working in the drawing office of the Lanchester Motor Co at Birmingham.

In 1903, they took out a patent for an improved system of high-tension ignition, which their father had discovered during his experimental work on electric condenser discharges. It was a "B" spark igniter using a Leyden jar. Alec looked after the technical side, while Brodie dealt with letters and accounts, doing the typing on his bed in his father's house at Edgbaston.

1904 They went into official partnership as Lodge Brothers, renting a one-room office at 14 New Street, Birmingham.

In 1907, they built a new workshop and offices in Wrentham Street, Birmingham, and took a stand at the Motor Show at Olympia (the second to be held). Alec Lodge's original mind was soon busily devising unheard-of ways of drawing attention to his products. At their first Show the brothers were content to stand on a soapbox in the gallery and shout themselves hoarse in praise of their ignition system, but in the following year Alec went one better and fixed an enormous plug on their stand which sparked continually and caused an immense sensation. Less inventive exhibitors were furious, and the fact that the plug had secretly been connected with the mains was also against it. A ban was issued, but Alec Lodge was undeterred. He arranged a battery of ordinary plugs which sparked the words LODGE PLUGS, and when this in turn was vetoed he spelled out the same proud message in lamps.

The firm had turned to selling plugs when the introduction of the Bosch magneto made their heavy coil system obsolete. This new departure was suggested by H. G. Longford, of the Sphinx Sparking Plug Co at Birmingham, who urged that Lodge should design their own plugs and let him make them under their name. At first reluctant, the partners finally agreed, and Alec Lodge's designs soon proved their superiority to the ramshackle plugs of the day. Gas tightness and insulation were his two main difficulties. To begin with he used porcelain insulators, made by French peasants, which sounds strangely amateur today. A single shoulder was seated on a soft copper asbestos washer, its top being wrapped with several turns of asbestos string secured-and, it was hoped, made gas-tight - with a brass gland nut. When plugs were returned to the factory as defective they were given a bench test on a 3 h.p. motor cycle engine, for in those days nobody expected them to stand up to the tresses of high compression.

At the Motor Show - already a social feature of London's autumn season - Lodge Bros. continued to cut a dash, but in addition Brodie Lodge, who was now in charge of publicity and staff management, began to advertise widely in both national and trade papers. And further interest was stirred up among the new and very keen motoring public by Alec Lodge's provocative letters in editorial columns on the whole subject, still highly debatable, of electric ignition. In these ways the name Lodge became increasingly known for sparking plugs suitable for cars, motor cycles, motor boats, and for gas and oil engines as well.

Another inventor of resource was developing the sparking plug. Bernard Hopps had left the British Thomson Houston Company in 1908 to form his own Mascot company, and a year afterwards he took out his important patent for making a gas-tight joint in a plug by means of fused glass. This idea was such a great advance that it quickly gained recognition for the Mascot Plug, in particular from Herbert Austin, who fitted it as standard in the Wolseley car. Originally occupying a part of the premises at Hunter's Lamp Factory, in Lower Hillmorton Road Rugby, the firm moved two years later to a small factory in Albert Street.

1913 Both Lodge Brothers and the Mascot Company had the common aim of producing the best possible sparking plug. Both firms had much to offer one another, and so in 1913 they decided to amalgamate, under the title of the Lodge Sparking Plug Company Ltd. This retained the Wrentham Street premises in Birmingham and the factory in Albert Street, Rugby. It was still a private company, with the Lodge brothers and Bernard Hopps as joint managing directors, and Alfred Hopps, a well-known Leicester accountant, as Chairman. And it still remained very much a family business, in which Raymond and Honor Lodge, brother and sister of the Lodges, took part.

As a result of the merger, the hopeful motorist gained for the first time an efficient, gas-tight, non-detachable plug; and when a little later mica was introduced for the insulation of the centre-pin the internal combustion engine was carried a stage further towards reliability. New cars were beginning to roll out of the factories in much greater numbers, and far fewer now died by the side of the road from spark failure. Lodge continued to do a minor trade in coils and distributors as well as plugs, and about this date added to its products an electric lighting set whose magnificence was the envy of all those hardy drivers still struggling with the nightly horrors of oil and acetylene. No one who has not stood striking match after match in the rain can begin to understand the feelings of the early motorist when he first pressed a lighting switch inside his car.

Lodge were honoured when they were labelled a Controlled Establishment, and told to concentrate on aero plugs. At the same time they had to think smartly, for the problems of the aircraft engine were entirely fresh to them. Experimental research was started immediately at the company's laboratories, in an urgent hot-house atmosphere, and resulted in a novel type of mica-insulated plug to be known throughout the R.F.C. as the Pepper Box Type. This was fitted mainly in Rolls-Royce engines, whose designs were themselves being developed with equally dramatic speed. Engine temperatures rose considerably, and the new plugs had to be able to stand up to them while sparking at high pressure, and rates already reaching 1,500 sparks a minute.

In this field, two particular advances in their wartime plugs helped Lodge to establish a unique position: copper sheathing to disperse the heat in the electrodes, and the mounting of the washers within the body of the plug. From the point of view of manufacture mica insulation was an extremely laborious process, but in spite of that millions of Lodge aircraft plugs were contributed successfully to the new arm.

1916 During this intensive period the inconvenience of premises divided between two towns became apparent, and in 1916 the present factory in St. Peter's Road, Rugby was completed. When the whole business was transferred to it plans for increased production went ahead more easily.

1919 Just after the First War, the capital of the company was increased, and its name shortened to Lodge Plugs Ltd. But still it remained a private concern.