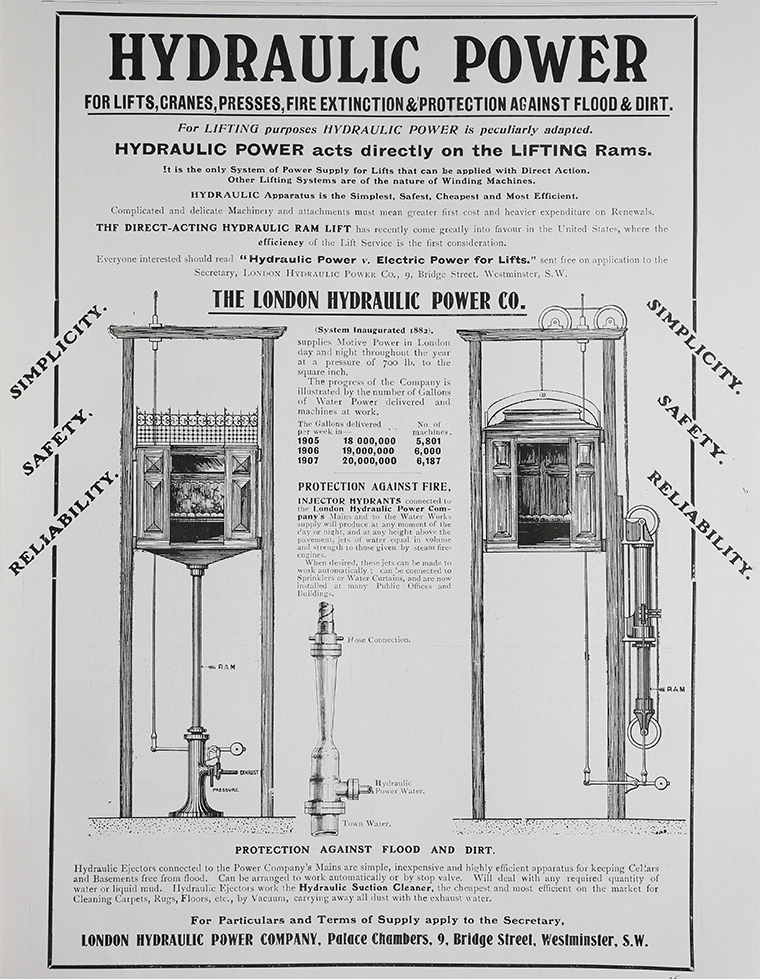 1883 The London Hydraulic Power Company was set up by an Act of Parliament, to install a hydraulic power network of high-pressure cast iron water mains under London. It was a subsidiary of General Hydraulic Power Co and was the successor to the Steam Wharf and Warehouse Co, founded in 1871 by Edward B. Ellington.

The network covered an area mostly north of the Thames from Hyde Park in the west to Docklands in the east.

The system was used as a cleaner and more compact alternative to steam engines, to power workshop machinery, lifts, cranes, theatre machinery, and the backup mechanism of Tower Bridge. It was also used to supply fire hydrants, mostly those inside buildings. The water, pumped straight from the Thames, was heated in winter to prevent freezing.

The pressure was maintained at a nominal 800 psi (about 5.5 MPa, or 54 bar) by five hydraulic power stations, originally driven by coal-fired steam engines. These were at:

Short-term storage was provided by hydraulic accumulators, which were large vertical pistons loaded with heavy weights.

From about 1904 business began to decline as electric power became more popular. The company began to replace its steam engines with electric motors from 1923. At its peak, the network consisted of 180 miles (about 290 km) of pipes, and the total power output was about 7000 horsepower (5 MW).

1977 The system closed, and the entire company was bought by Mercury Communications (a subsidiary of Cable and Wireless), who used the pipes as telecommunications ducts. Wapping Hydraulic Power Station, the last of the five to close, is now an arts centre and restaurant. [2]