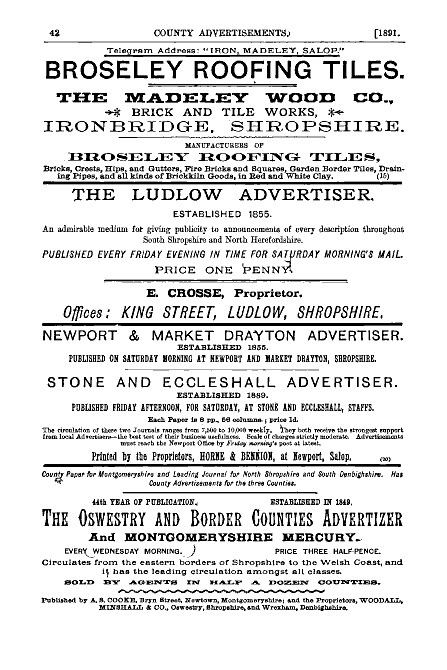 1770s the Madeley Wood Co was acquired by Abraham Darby (1750-1789); at that time the company had natural tar works at Coalport.

1796 the interests of the Darby and Reynolds families were separated - William and Joseph Reynolds (1768-1859) took charge of the Madeley Wood and Ketley ironworks.

1832 A relaunched Madeley Wood Co moved the blast furnaces from Bedlam, eastwards to a canalside site on Blists Hill, where the company had mining operations

Took over brickworks near Bedlam which had been established by Roger Cock in the early 19th century to make white bricks.

Late 19th century: The company's technology was old fashioned but its cold-blast pig iron was widely considered the best for hollow-ware manufacture, and the company survived the depression by concentrating on that product. But profits came from coalmining rather than iron making.

By 1891 Advert: Were making bricks and tiles - Broseley roofing products

1912 The third was blown out after a strike; the company concentrated on its colliery operations

1915 the Madeley Wood Co. negotiated a new lease of the manorial coal and ironstone.