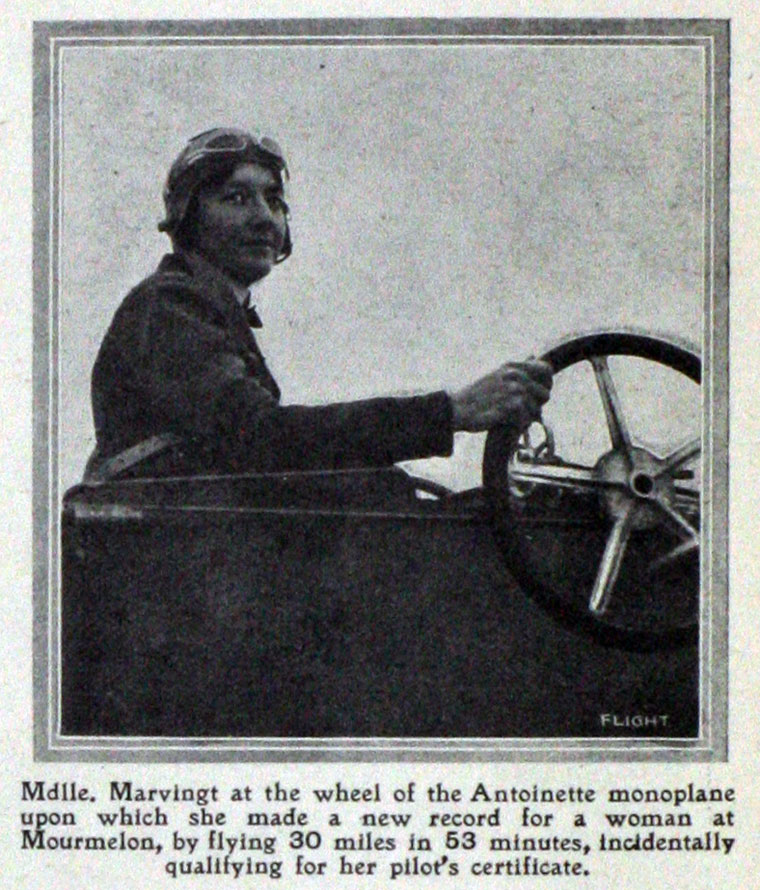 Marie Marvingt (20 February 1875 – 14 December 1963) was a French athlete, mountaineer, and aviator, and the most decorated woman in the history of France. She won numerous prizes for her sporting achievements and was the first woman to climb many of the peaks in the French and Swiss Alps. She was a record-breaking balloonist, a pioneering aviator and during World War I became the first woman to fly combat missions as a bomber pilot. She was also a qualified nurse, specializing in aviation medicine, and worked for the establishment of air ambulance services throughout the world.

Marie Marvingt was born on 20 February 1875 in Aurillac in the Cantal département of France but spent most of her childhood near Nancy in the Meurthe-et-Moselle département although her family moved to Metz, at that time part of Germany, from 1880-1889.

She was encouraged to participate in sports by her father, Felix, and at the age of 5 she could already swim 4,000m. She enjoyed many other sports including water polo, horse riding, athletics, boxing, martial arts, fencing, shooting, tennis, golf, hockey, football, winter sports, and mountaineering, and also practiced circus skills.

In 1899 she earned her driving licence.

Marvingt became a world-class athlete who won numerous prizes in swimming, fencing, shooting, ski jumping, speed skating, luge and bobsledding. She was also a skilled mountaineer and between 1903 and 1910 she became the first woman to climb most of the peaks in the French and Swiss Alps – including traversing Grands Charmoz and Grépon from Chamonix in a single day.

In 1905 she became the first woman to swim the length of the Seine through Paris. The newspapers nicknamed her "l'amphibie rouge" ("the red amphibian") from the colour of her swimming costume.

In 1907 she won an international military shooting competition using a French army carbine and became the only woman ever awarded the palms du Premier Tireur (First Gunner palms) by a French Minister of War.

She dominated the 1908 to 1910 winter sports seasons at Chamonix, Gérardmer, and Ballon d'Alsace, where she achieved first place on more than 20 occasions. On 26 January 1910 she won the Coupe Leon Auscher (Leon Auscher Cup) in the women's bobsledding world championship. She enjoyed cycling and rode from Nancy, France, to Naples, Italy, to see a volcanic eruption. In 1908 she was refused permission to participate in the Tour de France because the race was only open to men. Marvingt refused to relinquish her ambition and cycled the course after the race. She successfully completed the gruelling ride, a feat which only 36 of 114 male riders had managed that year. On 15 March 1910 the Académie des Sports (French Academy of Sports) awarded her a Médaille d'Or (Gold Medal) "for all sports", the only multi-sport medal they have ever awarded.

Marvingt ascended in a balloon for the first time in 1901.

In September 1909 she made her first solo flight as a balloon pilot. In the same month she also experienced her first flight as a passenger in an aeroplane piloted by Roger Sommer. On 26 October 1909 Marvingt became the first woman to pilot a balloon across the North Sea and English Channel from Europe to England. Her balloon was called L'Étoile Filante (The Shooting Star). She won prizes for ballooning in 1909 and 1910.

During 1910 she studied fixed-wing aviation with Hubert Latham in an Antoinette aeroplane. She piloted and flew solo in a monoplane, credited as the first woman to do so. She proposed the development of fixed-wing aircraft as air ambulances to the French government. On 10 June 1910 she received her balloon pilot's licence from the Aero Club de France. On 8 November 1910 Marvingt became the third woman in the world licenced as an aeroplane pilot, the second Frenchwoman after Raymonde de Laroche, and the only woman ever licenced in the difficult to fly Antoinette monoplane. In her first 900 flights she never "broke wood" in a crash, a record unequalled at that time. She participated in many airshows and in December 1910, while competing in Turin for the Coupe Femina (Femina Cup), she set the first official women's flight records for duration and distance at 53 minutes and 42 kilometers.

In 1912 she ordered an air ambulance from Deperdussin but it was never delivered because the business failed after the owner, Armand Deperdussin, embezzled company money.

In 1914 Marvingt was drawn by Émile Friant with her proposed air ambulance. During World War I she disguised herself as a man and, with the connivance of a French infantry lieutenant, served on the front lines as a Chasseur 2ième Classe (Soldier, 2nd Class) in the 42ième Bataillon de Chasseurs à Pied (42nd Battalion of Foot Soldiers). She was discovered and sent home but later participated in military operations with the 3ème Régiment de Chasseurs Alpins (3rd Regiment of Alpine Soldiers) in the Italian Dolomites at the direct request of Marshal Foch. She also served as a Red Cross nurse.

In 1915 Marvingt became the first woman in the world to fly combat missions when she became a volunteer pilot flying bombing missions over German-held territory and she received the Croix de Guerre (Military Cross) for her aerial bombing of a German military base in Metz. Between the two World Wars she worked as a journalist, war correspondent, and medical officer with French Forces in North Africa. While in Morocco she invented metal skis and suggested their use on aeroplanes landing on sand.

Marvingt devoted the remainder of her long life to the concept of aeromedical evacuation, giving more than 3,000 conferences and seminars on the subject on at least four continents. She was co-founder of the French organisation Les Amies De L'Aviation Sanitaire (Friends of Aviation Medicine) and was also one of the organizers behind the success of the First International Congress on Medical Aviation in 1929.

In 1931 she created the Challenge Capitaine-Écheman (Captain Écheman Challenge) which gave a prize for the best air ambulance design.

In 1934 she established a civil air ambulance service in Morocco and was subsequently awarded the Medaille de la Paix du Maroc (Medal of Peace of Morocco). In the same year she developed training courses for the Infirmières de l'Air (Nurses of the Air) and in 1935 became the first person licenced to practice aviation paramedicine.

In 1934 and 1935 she wrote, directed and appeared in two documentary films about the history, development and use of air ambulances: Les Ailes qui Sauvent (Wings which Save) and Sauvés par la Colombe (Saved by the Dove).

On January 24, 1935 Marvingt was made a Chevalier de la Légion d'honneur (Chevalier of the Legion of Honour).

With the outbreak of World War II in 1939 she established a convalescent centre for wounded aviators. During the war she served as a surgical nurse and invented a new type of surgical suture.

On 30 January 1955 she received the Deutsch de la Meurthe grand prize from the Fédération Nationale d'Aéronautique (French National Federation of Aeronautics) at the Sorbonne for her work in aviation medicine.

On 20 February 1955, her eightieth birthday, Marvingt was flown over Nancy by a U.S. Air Force officer from Toul-Rosières Air Base in a F-101 Voodoo fighter jet and reputedly broke the sound barrier. In the same year she also earned her helicopter pilot's licence.

Marvingt died on 14 December 1963, at the age of 88, in Laxou, Meurthe-et-Moselle département, France. Her funeral was on 17 December in Saint-Epvre and she was buried in a cemetery at Preville in Nancy.

In France there are streets, gymnasiums, schools, flying clubs, scout groups, and an apartment complex named after her. France issued an air mail stamp in her honour on 29 June 2004. Several annual awards are given in her memory including those of the Soroptimist Club of Aurillac, France, and one sponsored by the French Aviation and Space Medicine Association (SOFRAMAS) through the United States Aerospace Medical Association.