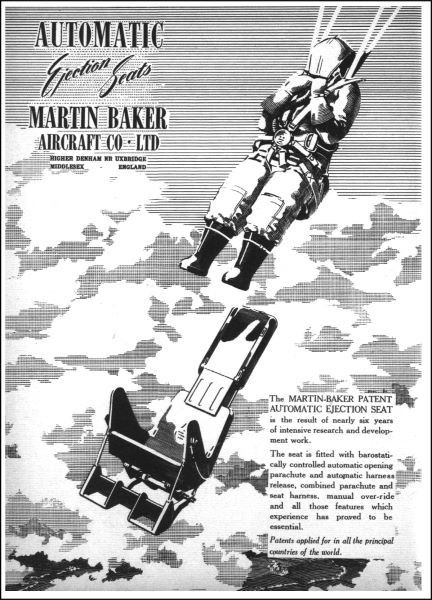 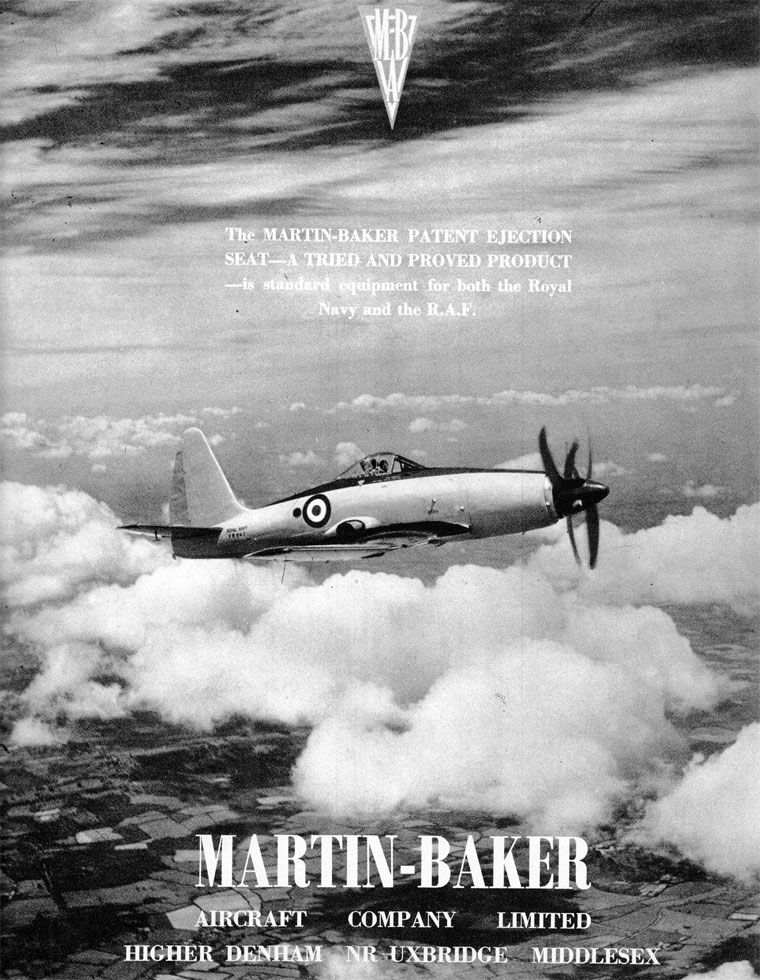 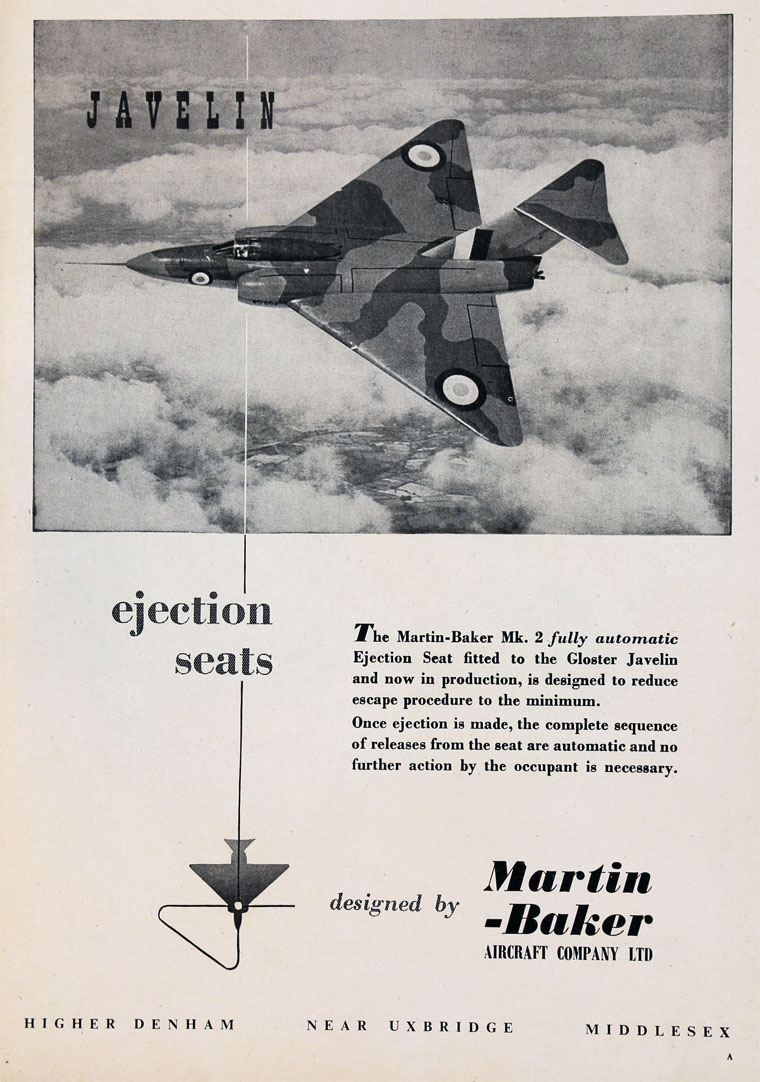 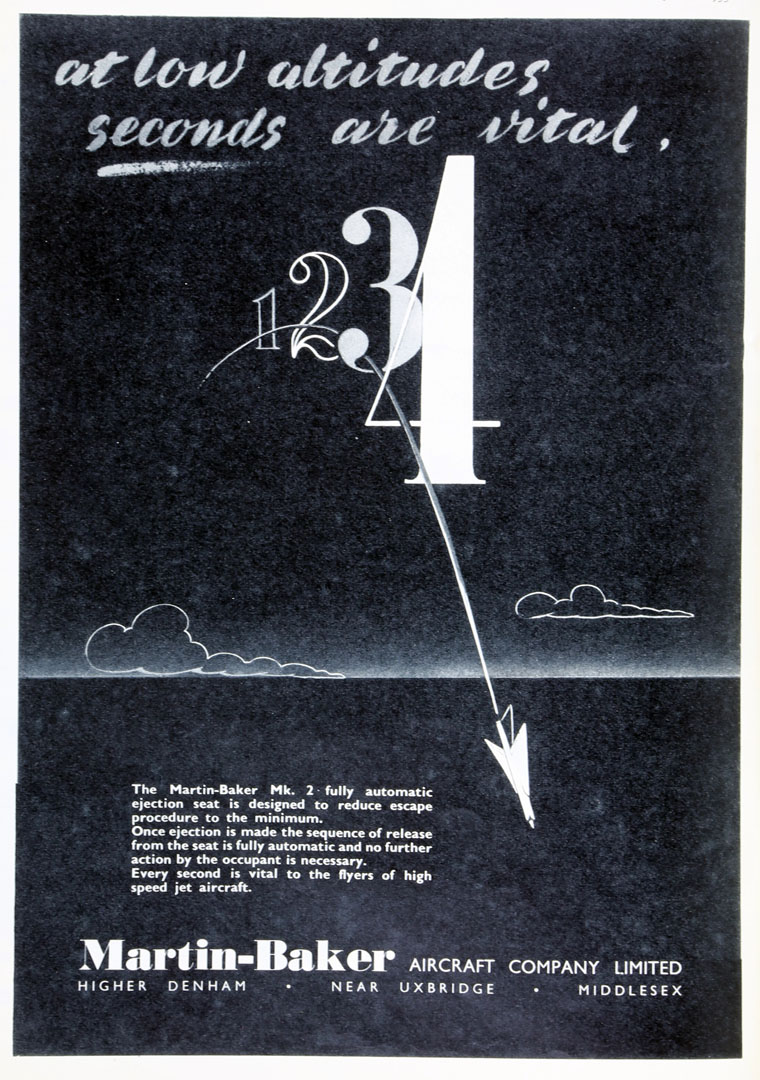 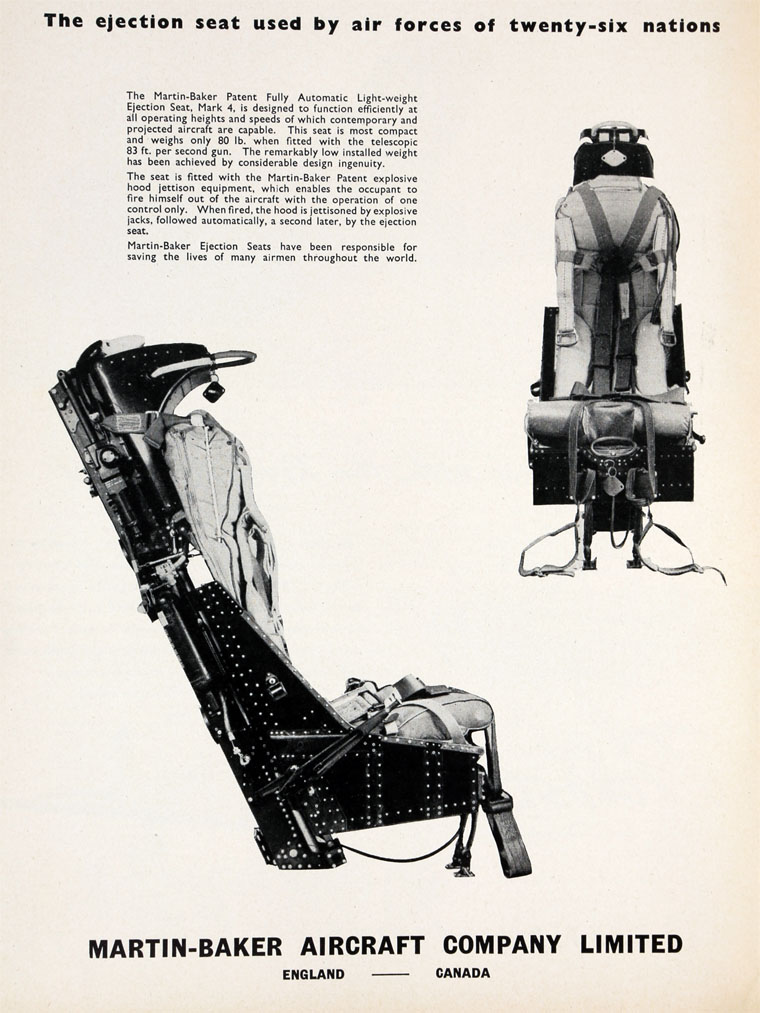 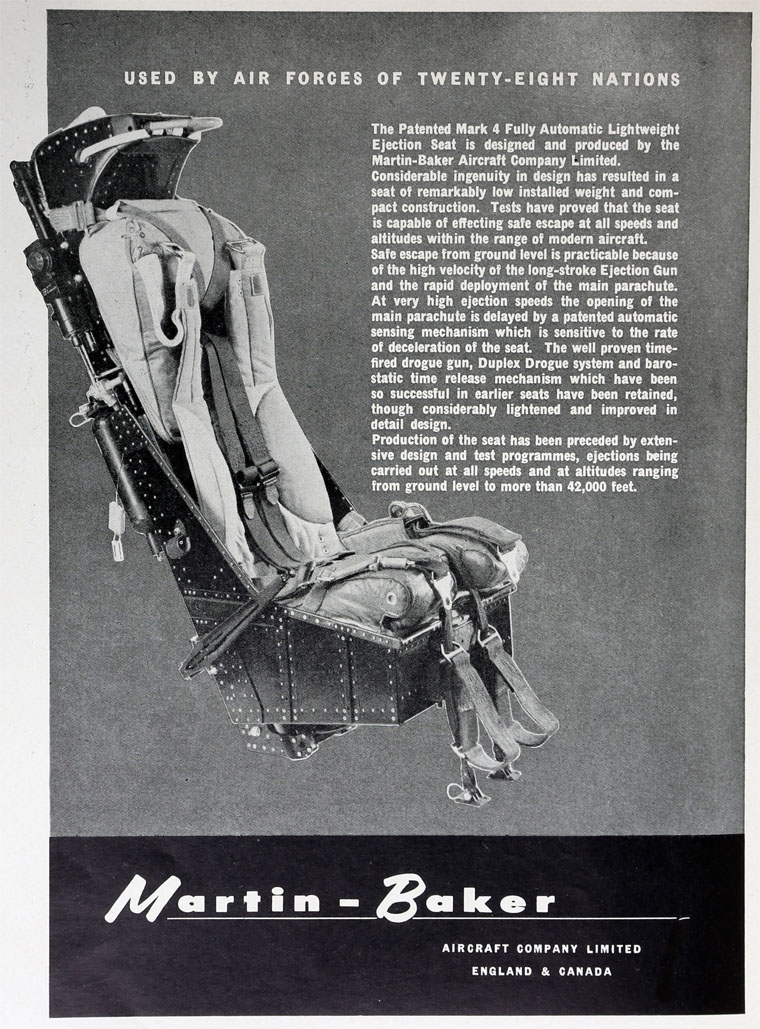 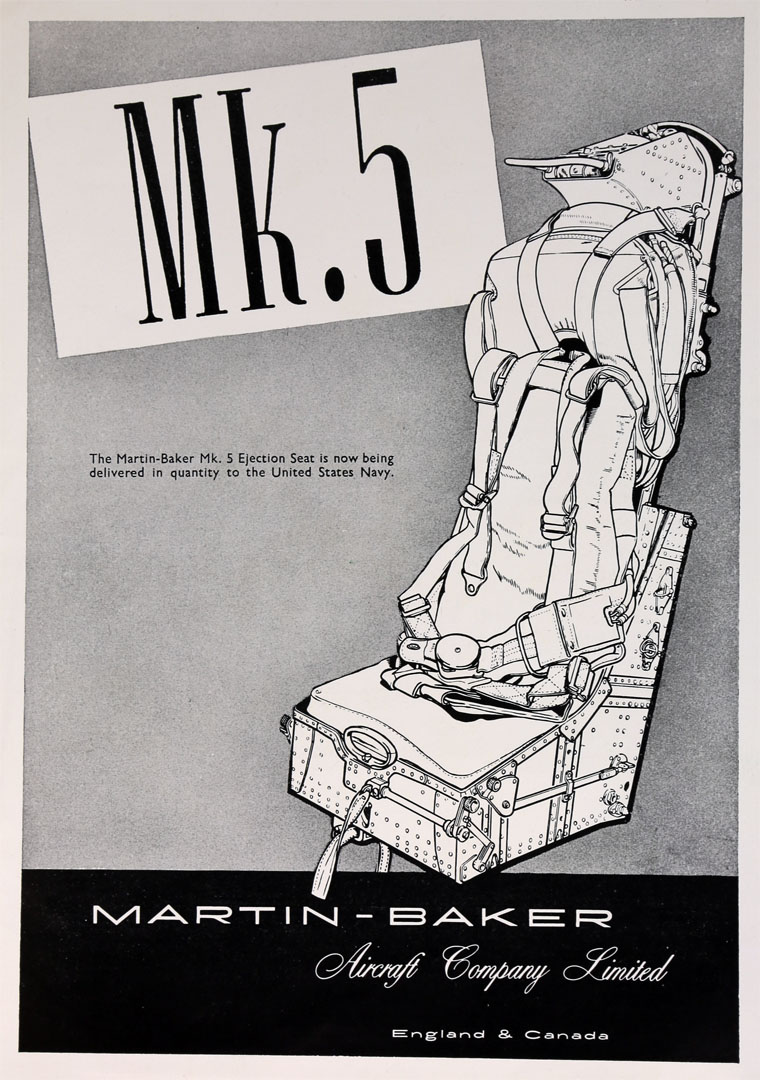 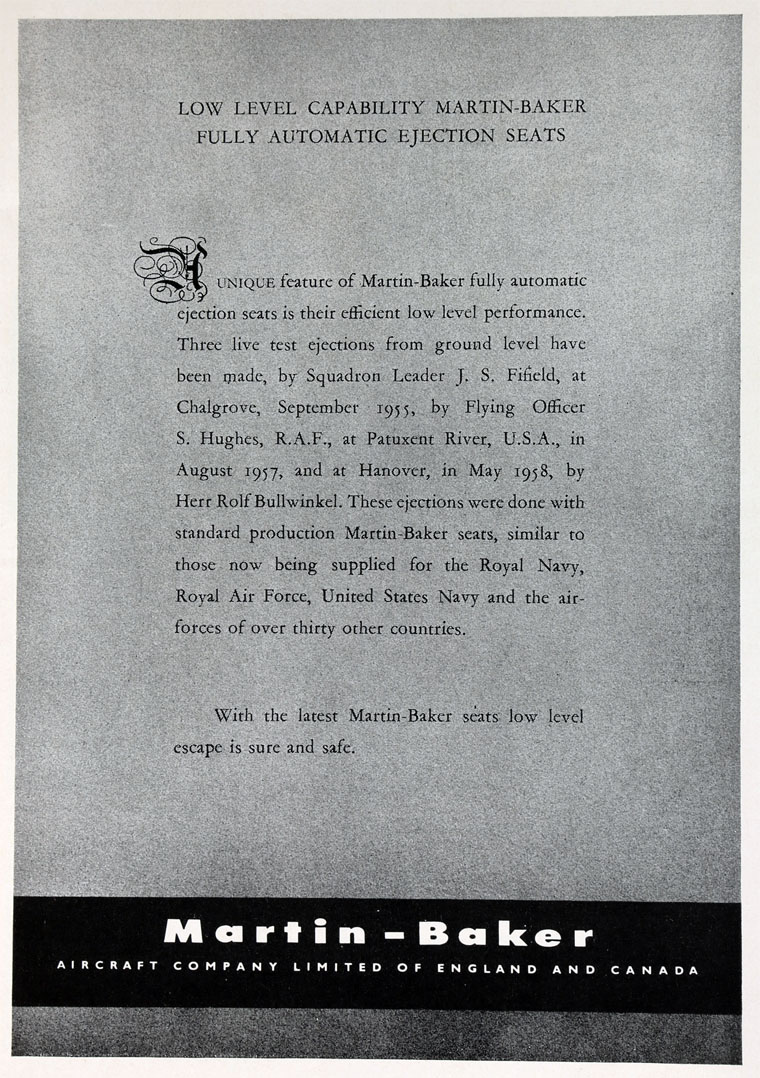 Throughout the war the company manufactured aircraft components including armoured aircraft seats for the Supermarine: Spitfire.

1944 the company was approached by the Ministry of Aircraft Production to investigate how the pilot of a a high speed fighter aircraft could be assisted in bailing out.

1968 Queen's Award to Industry for Export Achievement and for Technological Innovation. [4]

Martin-Baker started to investigate ejector seats from 1934 onward, several years before Germany (1938) and Sweden. The company concluded that an explosive-powered ejector seat was the best solution. Studies found the limits of upward acceleration which the human body could stand and included experiments on a volunteer, Bernard Lynch, who was a fitter at the factory. Their first seat was successfully live tested by Bert (sic) Lynch on 24 July 1946, who ejected from a Gloster Meteor travelling at 320 mph (510 km/h) IAS at 8,000 feet (2,500 m) over Chalgrove Airfield in Oxfordshire.

The first use of an ejector seat in a real situation by a British pilot involved the Armstrong Whitworth A.W.52 flying wing experimental aircraft in May 1949.

Martin-Baker was a leading pioneer in expanding the operational envelope of the ejection seat so it could be used a low altitudes and air-speeds leading eventually to a "zero-zero" capability.

Martin-Baker has supplied approximately 69,000 ejection seats of which 19,000 are currently in service. Around 7,000 – 10% of the total delivered – have been used by aircrew to abandon aircraft. It also manufactures fixed shock-absorbing helicopter seats designed to help the occupants survive crashes.