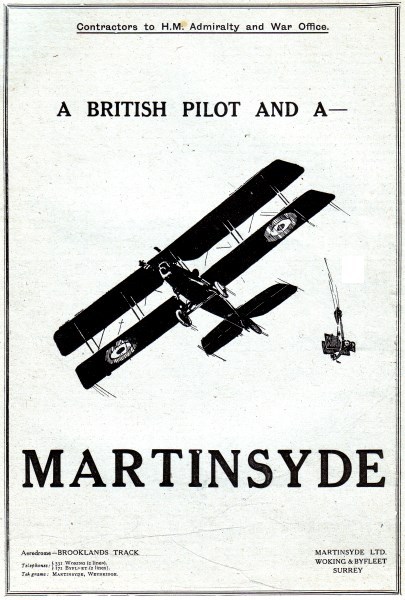 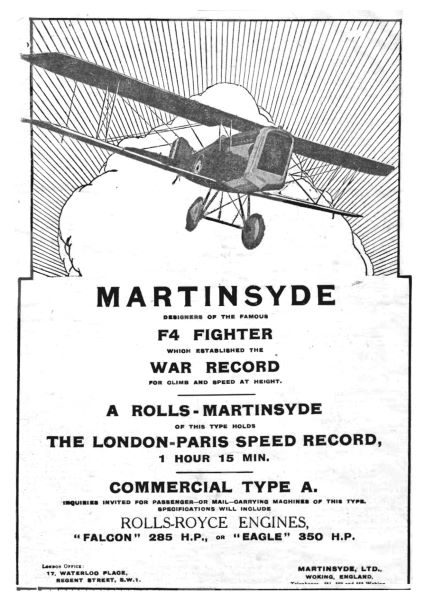 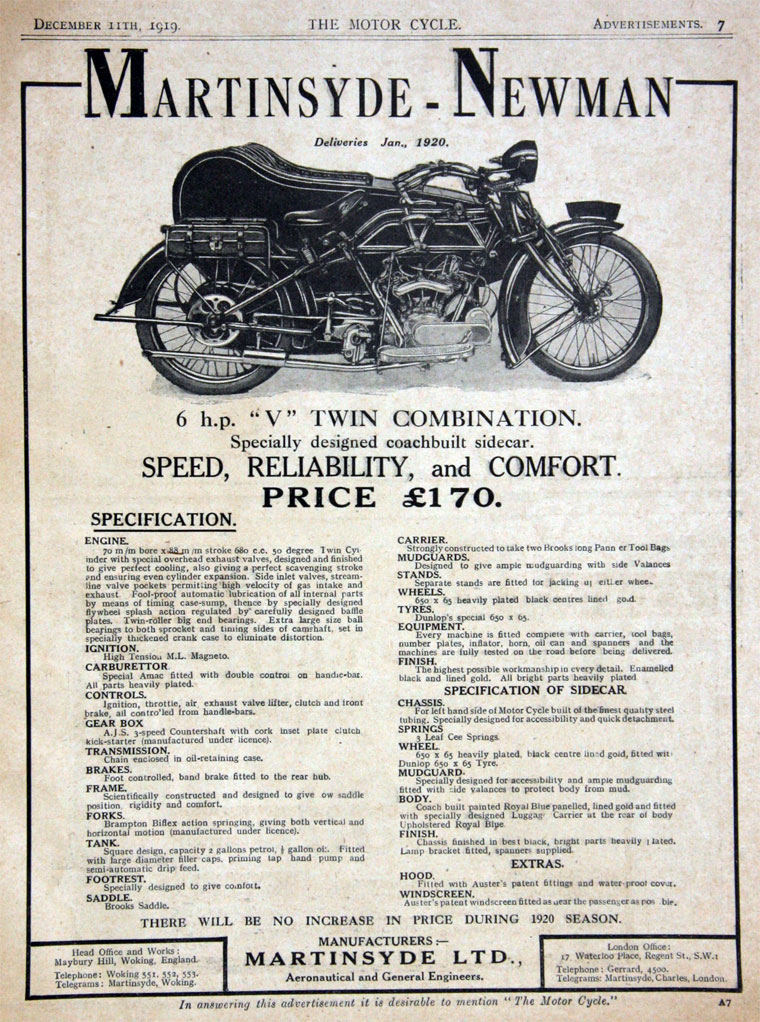 Martinsyde was a British aircraft and motorcycle manufacturer, based in Woking and Brooklands.

1908 The company was formed as a partnership between H. P. Martin and George Handasyde and known as Martin and Handasyde. They built an early but unsuccessful aircraft at Hendon Aerodrome and then moved to Brooklands. During its existence the company produced aircraft under subcontract as well as its own designs.

1912 they renamed the company Martinsyde Ltd.

Moved to Woking where they had built a new larger factory.

WWI Produced several new designs of aeroplane including the S.1 Scout, a biplane, and a larger aeroplane knicknamed "Elephant".

1920 At the International Aero Exhibition at Olympia much attention was given to the 'Semi-quaver', a single-seater driven by a 300 hp Hispano-Suiza engine having recently set a British record by flying at 161.4 mph. They also showed a four-seater 'A' type.

1920 Application to wind up the company by creditors[1]

1923 The company went into liquidation.

A number of surplus Buzzard airframe were later built up with a new engine, the radial Armstrong Siddeley Motors Jaguar, by the Aircraft Disposal Co and sold as the "Martinsyde ADC.1" in 1924. A development of the F.4 was also made by the ADC, two "ADC Nimbus" produced as prototypes.

Martinsyde were motorcycles produced by Martin and Handasyde from 1919 to 1923.

1919 After the end of the Great War, and having been major aircraft producers for those years, Martin and Handasyde decided to diversify by turning to motorcycle manufacture. They had plenty of room for production and a reputation for good quality, so decided to manufacture the bulk of components in-house, including V-twin engines with unusual eoi valve layout. The first machines were badged as Martinsyde-Newman, as the engine had been designed by H. C. Newman. The 677cc V-twins rapidly gained a good reputation for reliability through extensive trials work. The gearbox, made under licence from AJS, was a standard three-speed. Sidecar outfits were available, including one suitable for commercial use.

1923 Various experiments were conducted with valve gear controlled by leaf springs and a vertical single model of 347cc was tried. Towards the end of the year the business failed.