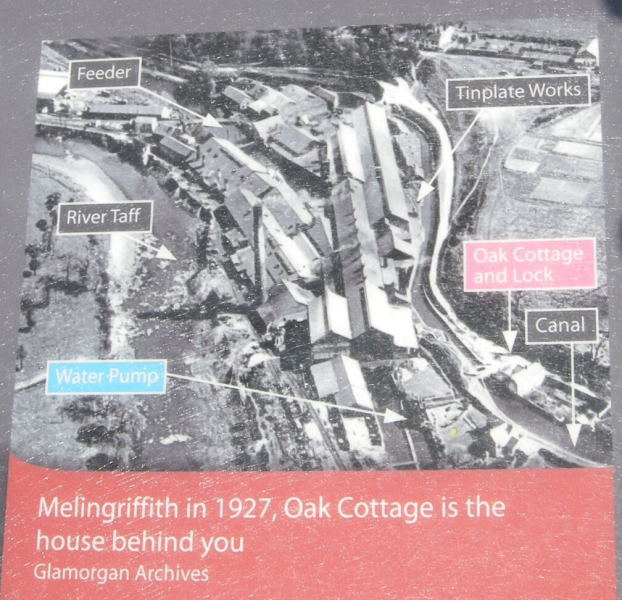 3. Detail from display board showing the pump in relation to the Melingriffith Tinplate Works, the River Taff, and the Glamorganshire Canal in 1927

4. This is Oak Cottage, seen in photo 3 above. Hard to imagine that canal boats once bumped against the end wall, at the downstream end of Melingriffith Lock.

Referring to photo 1, behind the trees and houses in the background is the River Taff, flowing right to left. Melingriffith tinplate works was off to the right. Some distance upstream was a weir, built to provide a head of water to serve various water wheels in the tinplate mill.

Behind the camera there used to be a canal (the Glamorganshire Canal). In the early days the canal suffered severely from shortage of water on the approach to Cardiff. It was decided to build a pump to transfer water from the River Taff to the canal. This was located downstream of the tinplate works, so as not to interfere with the works' right to freely use water from the Taff to power its waterwheels. It continued to provide this service until the late 1920s.

The heart shapes in the waterwheel hubs seem whimsical, but there is a suggestion that they served a function, namely for sighting purposes when lining up the three wheels.

A photograph taken in the late 19th century shows the pump in action[1]. The clean appearance of the machine's timbers in the photograph suggests the likelihood that these had been fairly recently renewed. The two pump cylinders were 32" diameter and the stroke was 5ft. A trough, with its axis parallel to the waterwheel axis, took the water to the canal. The pumps lifted the water over a wooden board serving as a weir, immediately downstream of which was a large log. Rowson and Wright suggest the possibility that this served to discourage the formation of ice.

A good website has been provided by the Friends of Melingriffith Water Pump. History:-

Many photographs of the 2010 restoration work carried out by local firm Penybryn Engineering:-

Watkin George's involvement stems from his association with Crawshay's Cyfarthfa Ironworks, Crawshay being a major promoter of the Glamorganshire Canal.

Regarding the possibility that the pump was built or modified by John Rennie, there is no sound basis for this possibility. Rennie and/or Jessop were consulted about the problems in 1806, but there is uncertainty about any follow-up action. What we can do is compare the design and construction of the machine with Rennie's 1811-built pumping machine at Claverton Pumping Station.

The Claverton machine shows one definite similarity, in the arrangement of sockets in the rims of the water wheel castings to hold the tapered wooden pegs for the paddle boards.

There the similarity seems to end. The Melingriffith pump wheels have individual spokes bolted to the rim and to the hub, whereas the Claverton wheels are cast in two halves, each half comprising rim, spokes and hub. The spokes at Melingriffith are of T-section, whereas those at Claverton are cruciform. The inboard ends of the Melingriffith spokes are dovetailed in the hubs. Watkin George favoured the use of dovetailed connections for some members of his Pontycafnau Bridge.

The main shaft at Claverton is square and rather slender, whereas Melingriffith has a round shaft (a modern replacement, but the original must have been round or multi-faceted, not square). It may be relevant to note that Watkin George's great 50 ft. diameter wheel had a cylindrical shaft.

Watkin George favoured heart-shaped motifs, as seen in the wheel hubs here. The Ynysgau Iron Bridge at Merthyr Tydfil (removed in 1963), designed by Watkin George, had heart-shaped decoration on the handrail castings. [2]. A suggestion of a heart shape also appears on cast iron handrail posts on the Watkin George's Pontycafnau Bridge.

In summary, the design and construction of the Melingriffith machine are far more consistent with the work of Watkin George than of John Rennie.