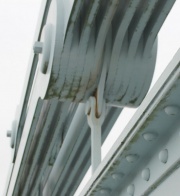 Prior to the bridge's completion in 1826 the island had no fixed connection to the mainland and all movement to and from Anglesey was by ferry or on foot at low tide. The Act of Union 1800 increased the need for transport to Ireland, and with Holyhead as one of the principal terminals to Dublin it was decided that a bridge was needed.

Thomas Telford was assigned the task of improving the route from London to Holyhead, and one of the key improvements was his design of the suspension bridge over the Menai Strait between a point near Bangor on the mainland and what was then the village of Porthaethwy which is now also known as Menai Bridge on Anglesey. The design of the bridge had to allow sailing ships 100 ft tall to pass under the deck at high water slack tide.

Construction of the bridge began in 1819 with the towers on either side of the strait. These were constructed from Penmon limestone and were hollow with internal cross-walls.

1821 William Hazledine contracted for the supply of wrought and cast iron for the bridge. Sixteen huge chain cables, each made of wrought iron bars, supported the deck. The span between the centres of the towers is 579 ft. The bars measured 3.25" by 1", with eyes formed at the ends for 3" bolts. The bars were interconnected by plates measuring 8" by 1". The bars in the anchorage tunnels were made of larger section, in anticipation of their being more vulnerable to corrosion. Where the chains pass over the towers, they are supported on cast iron saddles, which are themselves supported on iron rollers 8" diameter and 3 ft 8" long, to accommodate thermal expansion. The rollers were interconnected at their ends by running in brasses in wrought iron frames. The chains on each side were connected by a number of transverse ties. Additionally, diagonal wrought iron lacing was fitted between pairs of transverse ties, as a result of the observed action of gusts of wind during construction. Each length of chain was provided with four sets of adjusting links, the chains having elongated slots accommodating wedges.[1]. To avoid rusting, each bar was immersed in linseed oil while hot.

1826 The bridge was opened to much fanfare on January 30, 1826, and succeeded in reducing the 36 hour journey time from London to Holyhead by 9 hours.

Damaged by winds in 1839, the road surface needed extensive repair, and in 1893 the entire wooden surface was replaced with a steel deck.

Over the years, the 4.5 ton weight limit proved problematic for the increasing freight industry and in 1938 the original iron chains were replaced with steel ones without the need to close the bridge.

In 1999 the bridge was again closed for around a month to resurface the road and strengthen the structure, requiring all traffic to cross via the nearby Britannia Bridge.

In 1850 a rail bridge, the Britannia Bridge was opened a mile away from the suspension bridge

Note: The smaller Conwy suspension bridge was built concurrently with the Menai bridge, and the original type of chain links, together with the adjusting links, can still be seen there.