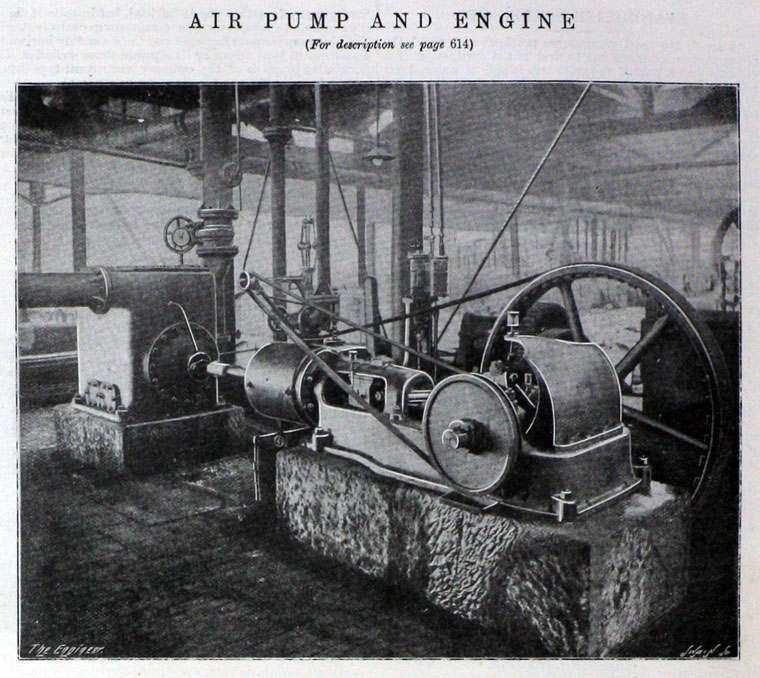 1901. Condenser at Rotherham installed by T. Ledward and Co.

1862 Advertisement: 'MIDLAND IRON WORKS, MASBROUGH. TO be SOLD by AUCTION, by Mr. JOSEPH NICHOLSON, of Sheffield, ….. all those extensive IRON WORKS and Premises, well known as the MIDLAND IRON WORKS, situate at Rotherham, in the County of York, adjoining the Masbrough Station of the Midland Railway, …. comprising about three Acres of Freehold Land, …. with every requisite for a Trade of 230 Tons per week of finished Iron, the Erections and Machinery comprise twenty-six Puddling Furnaces, one Ball Furnace, one Hammer Furnace, eight Mill Furnaces, one Condensing Engine of sixty horse-power, one High Pressure Engine forty horse-power, also two smaller High Pressure Engines of eight horsepower each, two Steam Hammers, four Trains of Rolls, and a powerful Lathe for turning Rolls, with all the usual Offices and Warehouses required by the Trade. Also, all those Six DWELLING-HOUSES adjoining to the Works. The Premises are most eligibly situated on the Midland Railway, from which they have a siding to the Works, and they are in close proximity to ample supplies of Hard and Soft Coals. The Works, which have been established for fourteen years, are in full operation, and enjoy the advantage of an excellent Trade connection. The Works have been carried on under inspection for the last six months, and have yielded a clear profit at the rate of £5000 per annum. Further Particulars ….'[1]

1862 'FRIGHTFUL BOILER EXPLOSION and SERIOUS LOSS OF LIFE. An explosion of a most fearful character occurred at Messrs. Beatson and Co.'s, the Midland Iron Works, adjoining the Midland Railway Station, Masborough, on Wednesday morning, about half-past six o'clock. Fortunately the men employed on the night turn had just gone off, and those to be employed during the day had only arrived small numbers, or the consequences must have been much more serious.

'The cause of the calamity was the bursting of a horizontal boiler, adjoining which were three furnaces — one ball furnace situate one end, and other two puddling furnaces. These are completely demolished, and the roofs of nine others entirely stripped away. The length of the mill about yards, which were numerous sheds covering furnaces in daily use. These sheds were covered over with slates and sheet iron, and were supported by massive iron pillars and girders with massive beams. All are entirely swept away, leaving a debris of an indescribable character. The suddenness of the occurrence caused the greatest consternation amongst the men employed on the works, and the explosion is described as exceeding in intensity the most dreadful thunder. Immediately the entire neighbourhood was one mass of smoke and dust, and the adjoining fields were lighted with a gleam arising from the hot bricks which were sent by the force of the explosion all around, actually lighting up the grass in the adjoining fields, where numbers of bricks are buried to the depth of a foot, the field being literally ploughed up. Adjoining the boiler where the explosion occurred is a patent hammer, and a little further on a fly-wheel attached to the engine, the engine-house being about 80 yards distant from the exploded boiler. This fly-wheel weighs about 27 tons, and the spur wheel of only little smaller dimensions and less in weight. The fly-wheel was caught by a piece of the boiler and was entirely smashed, carrying away a piece of it, weighing two tons, which was driven a distance of 40 yards. The boiler divided itself into two parts, one taking a westerly and the other an easterly direction, and, whichever way it swept, it carried with it every opposing obstacle.

'Mr. Hartley, the manager, was on the spot, and rendered every aid. He succeeded in extricating one of the men from his fearful position in an inanimate state, and immediately swooned away. The bodies of five men were shortly recovered, all being dead, and nearly 20 others in a fearfully lacerated state. Two of these have since died, and the others are in precarious state.

'All the medical gentlemen of the neighbourhood were present in attendance upon the injured workmen, several of whom were conveyed to the Sheffield Infirmary.'[2]

1863 'DREADFUL ACCIDENT AT ROTHERHAM. A shocking accident occurred at Rotherham yesterday, under somewhat singular circumstances. It will be recollected that at the explosion of a boiler at the Midland Iron Works, Masbro', on the 3rd Dec, an immense flywheel, which was attached to the large engine, was broken in several pieces by the boiler, which was driven through the works. An order to replace the wheel was given to Messrs. Walker and Eaton, of the Wicker foundry, and the casting was completed a day or two ago. The wheel is twenty feet in diameter, the rim being about fifteen or sixteen inches thick, and the weight about sixteen tons in its present unfinished state.

The casting was sent by road to Rotherham, and in passing through the town it was found necessary to take it through the new road leading out of Howard Street into the bottom of Bridgegate. Near the termination of the new road, the wheels of the dray sunk deeply into the ground, and further progress was rendered impossible during that night. In the course of yesterday morning, the sunken wheels were raised, and no less than nineteen horses having been attached to the dray, a vigorous effort was made to complete the remainder of the journey to the Midland Iron Works.

About one o'clock the casting was brought to the foot of Rotherham Bridge, the roadway of which, as most of our readers are doubtless aware, is of very scanty width, with footpaths scarcely sufficient for two persons to walk abreast upon. The passage of the enormous casting through the streets had excited great curiosity, and about a thousand persons had assembled in the neighbourhood of the bridge to witness the passage over. The bridge is approached by a slight ascent from the Rotherham side and the men in charge of the dray whipped their horses in order to get up the incline with greater ease

The crowd of people who lined the sides of the road were not prepared for this movement, and considerable confusion occurred. The large number of powerful horses attached to the dray drew it over the bridge at a considerable speed, but, most unfortunately, the dray seems to have swerved to one side in passing the crown of the arch, and a number of persons were caught between the rim of the casting and the stone parapet of the bridge. The police and others gave instant attention to the sufferers, some of whom had received fearful injuries.

The most distressing case was that of a married woman named Catherine Wilson, residing in Jubb's-square, Masbro'. One of her hips was broken, and she was otherwise so fearfully mangled by being crushed against the wall that her recovery is considered hopeless. The case is rendered the more lamentable by the fact that the poor woman was far advanced in pregnancy. Her son William, aged seven years, was standing by her side when the accident occurred, and he was also a severe sufferer, his head being very much bruised. Only a few days ago the little fellow had an arm broken, and it is feared that the effects of the accident, acting upon a frame already much weakened, may prove fatal. Two other boys, named respectively William Longden, ten years, and his brother Charles, six years, were also very much hurt, the eldest having his collar bone broken.

Several men who were at the same side of the bridge got over the parapet, and hung suspended by their hands over the river until the danger had passed. Others escaped with some slight bruises.
Mrs. Wilson and her son, and the two Longdens, were at once conveyed to the Dispensary, where the promptest attention was paid to them by the house surgeon, Mr. Darwin. Mrs. Wilson was afterwards removed to her home.
Further investigation will show whether or no blame is attributable to any person, but persons who witnessed the accident ascribe it to the incautious conduct of the crowd, who nearly blocked up the road across the bridge, and persisted in endeavouring to go forward, despite the strenuous efforts of the police to keep the road clear. When the horses began to trot, the crowd could not recede quick enough, and consequently a large number of persons attempted to scramble on to the narrow footpaths, leaving only a foot or two of space between themselves and the rim of the casting. An accident was therefore inevitable if the dray went out of the straight line, and this unfortunately occurred. The casting subsequently reached the works, without any further casualty.'[3]

1899 The company was registered on 9 August, in reconstruction of a company of the same name. [5]

By 1966 was part of Midland and Low Moor Iron and Steel Co, a subsidiary of Thomas W. Ward