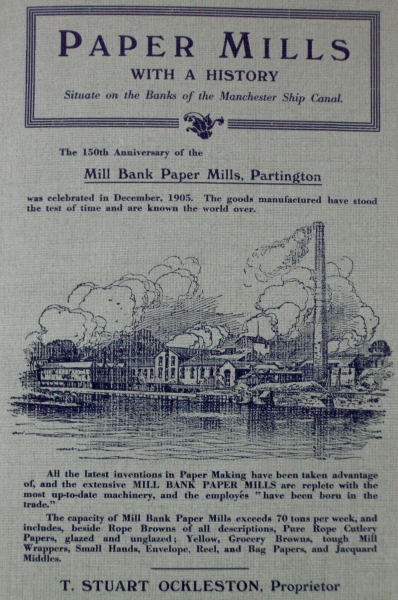 Also known as Millbank Paper Mill or Occleston's Mill. Located immediately west of the village of Partington, on the River Mersey and the Manchester Ship Canal between Manchester and Warrington. The location was also known as Owlet's Lock. According to one source[1], the mill was originally an iron slitting mill producing nails, wires and bars, with a corn mill added in 1796, and a paper mill added in 1825. This is not consistent with a 1917 advert which stated that the mills celebrated their 150th anniversary in December 1905.

Another source[2] records that some time before 1760 the Titley family had acquired an iron slitting mill at Partington, and Abraham Titley (1735-1772) built a paper mill there shortly before his death. Having no heirs, the mills were advertised for sale (see below). The slitting mill was shown on 1786 Yates's map of Lancashire.

1772 Advertisement: 'To be Sold by Way of Auction, At the House of Mr. James Maguire. being the Eagle and Child Inn, in Warrington, in the County of Lancaster, upon Thursday the first Day of October, 1772, at four o’clock in the Afternoon, .... Lot.1. THE FEE SIMPLE and INHERITANCE of all that Capital new-built DWELLING-HOUSE, called MILL-BANK-tailed HOUSE, pleasantly situated, with good Garden walled round, and well stocked with Fruit Trees, a Summer-House and convenient Offices thereto belonging, situate and being in Partington, in the County of Chester, and the several Closes of Land usually held therewith, containing four Acres and half large Cheshire Measure, after eight Yards to the Perch, late the Inheritance and in the Possession of Mr. Abraham Titley, deceased.
2. Also a convenient MILL for slitting and rolling of Iron, with the Wheels, Rollers, Cutters, and other Utensils necessary to carry on the Works, and a Dwelling-house and Warehouses thereto belonging, situate upon the River Mersey, in Partington aforefaid, late in Mr. Titley’s Possession.
3 Also a large new-built PAPER MILL, with the Drying-bay, Dwelling-Houses, and Appurtenances, and a Fish Pond and two Gardens thereto belonging, situate upon the River Mersey. Partington aforesaid, late in the said Mr. Titley's Possession.
The above Mills are well situated upon the navigable River Mersey, between Manchester and Liverpool, about seven Miles from Warrington, and eleven Miles from Manchester, have a constant Supply of Water, and are in the Center of an extensive Iron Manufactory.
Edmund Crompton and Thomas Greaves upon the Premises, will show the same to any Body minded to view them ; and for further Particulars apply to Mr. Thomas Watt, or Messrs. Turner and Kerfoot, of Warrington.' [3]

1812 Partnership between Martin Marshall, deceased, James Greaves and Charles M'Niven, in the Mill-bank Corn Mills, Partington, dissolved by the death of Martin Marshall [4]

The 1917 advert names T. Stuart Ockleston as the proprietor, and states that the capacity was 'in excess of 70 tons per week, and includes, beside rope browns of all descriptions, Pure Rope Cutlery Papers, glazed and unglazed; Yellow, Grocery Browns, tough Mill Wrappers, Small Hands, Envelope, Reel, and Bag Papers, and Jacquard Middles'

Prior to the introduction of steam power, the mill had been water-powered, a weir having been constructed across the River Mersey. A lock was incorporated to allow navigation. The mill was demolished in the 1970s, but the lock is remembered in the name of the adjacent 'Lock Lane'.

The mill, weir, wharfside and lock can be seen in an 1889 photograph in the online 'Transport Archive'. They are also shown on the 1873/7 O.S. map here. The weir and lock subsequently went out of use with the construction of the Manchester Ship Canal. The Canal Archive information includes the following curious aspect of the effect of the canal’s construction: 'In History of the Manchester Ship Canal by Sir Bosdin Leech, he comments on the paper mill. 'It was contended that paper made with the filthy and chemically polluted waters of the Irwell had the remarkable property of preventing steel from rusting; therefore it found favour in the Sheffield market: and to give pure water in its place would be a serious loss.' The Mill owners claimed compensation from the Manchester Ship Canal Company. Leech goes on to say that the claim for damages against the company on this issue was not found in favour of the works.' [7]