Grace's Guide is the leading source of historical information on industry and manufacturing in Britain. This web publication contains 149,673 pages of information and 235,472 images on early companies, their products and the people who designed and built them. 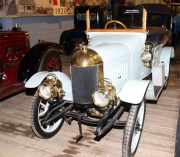 1913. Exhibit at the Heritage Motor Centre. 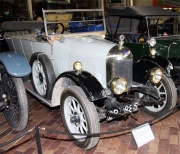 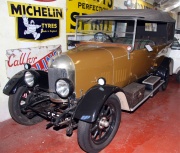 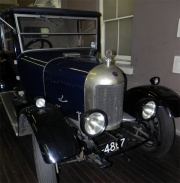 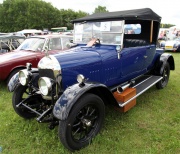 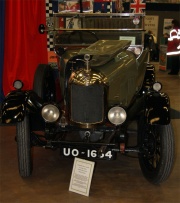 Note: This is a sub-section of Morris.

William Morris' first car was called the Oxford in recognition of its home city. To keep costs down virtually all components were bought-in and assembled by Morris. It was a small car with a 1,018 cc four-cylinder side-valve engine with fixed cylinder head from White and Poppe. Ignition was by a Bosch magneto.

The chassis was of pressed-steel construction and suspension was by semi-elliptic leaf springs at the front and three-quarter ones at the rear. The brakes, on the rear wheels only, were external contracting type using metal shoes. A three-forward and reverse gearbox was fitted. The headlights were acetylene and the side and tail lamps oil.

The car got its name from its distinctive round-topped radiator at first called the bullet nose. Most bodies, made by Raworth of Oxford, were of the two-seat open tourer type, there was also a van version, but the chassis was too short to allow four-seat bodies to be fitted.

The original Cowley, introduced in 1915, was a cheaper version of the first Morris Oxford and featured the same "Bullnose" radiator. To reduce the price many components were brought in from United States suppliers which proved cheaper than their UK equivalents. The 1495 cc, side valve, four cylinder engine was by Continental and the three speed gearbox by Detroit. Supplies of these components was badly affected by World War I. The suspension used semi elliptic leaf springs at the front and three quarter elliptics at the rear.

The last example of the model, using up the original engine supply, was made in 1920.

The updated Cowley for 1919 had an engine made by the British branch of the French Hotchkiss company, which was essentially a copy of the early Continental unit which was no longer being made. It was the basic model of the Morris two car range of the time with the Oxford, which used the same 1.5L 26bhp engine until 1923, having leather upholstery and upgraded lighting as the de-luxe version.

Morris acquired the British interests of Hotchkiss in 1923 and renamed them Morris engines branch.

The 1919 Oxford was an upmarket version of the Cowley model. It retained the pre-war Bullnose radiator style but in a larger version. The 1,548 cc engine was of Continental design made by the British branch of the French Hotchkiss company in Coventry for Morris at prices well undercutting White and Poppe. (Morris bought the British factory in 1923 and changed the name to Morris engines.) In 1923 the engine was enlarged to 1,802 cc.

It was differentiated from the Cowley by having a better electrical system and leather upholstery. In 1925 it got a longer wheelbase chassis to move it further from the Cowley, and four-wheel brakes. This model of the Oxford would be the basis of the first MG, the 14/28 Super Sports.

A short-lived six-cylinder variant, The F-Type Oxford Six, was announced in 1920 and was in theory available until 1926. The 2,320 cc engine proved unreliable and few were sold. Although the car was longer than the four by 9 inches all the extra space was given over to the engine