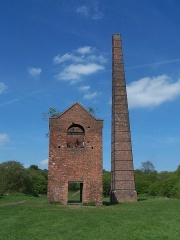 Netherton Tunnel was the last canal tunnel to be built in Britain during the Canal Age.

The first sod was turned by Lord Ward on 31 December 1855 and the canal opened on 20 August 1858, providing a waterway connection between the Black Country towns of Netherton and Tipton.

The tunnel was built to relieve the bottle neck of the adjacent Dudley Tunnel which is very narrow, has alternating blocks of one-way working; and had waiting times of eight hours or more, and sometimes several days.

The Netherton tunnel was built with a width of 27 feet to allow two-way working of narrowboats; and is brick lined throughout. It has towpaths running through it, one each side, which enabled horse-drawn narrowboats to be pulled through it.

Distance markers are still visible on the Eastern wall. The tunnel was fitted, from the start, with gas lighting over the towpaths, though this was later converted to electricity and it is now unlit.

The towpaths were closed to members of the public in early 2007 but from October walkers are once again allowed to access the eastern towpath of the tunnel as a through route; gates have placed on both towpaths but only those on the western towpath are kept locked and can only be unlocked by authorised personnel.

Today (July 2009) the northern gate on the western path is open and unlockable and the one on the southern gate disappeared altogether. Nevertheless the western towpath is very derelict with long and deep potholes full of water.

The air vents that run along the line of the tunnel and provide ventilation, and a shaft of light into the canal, are know by the locals as "pepper pots", because of their shape. They are brick lined and the openings are covered by an iron frame or grill. The wide bore and good ventilation mean that boats using the tunnel today are allowed to use the power of their internal combustion engines, which is prohibited in the narrower Dudley Tunnel.

The tunnel cost £302,000 as opposed to the £238,000 estimate prior to construction. The main reason for the project being overbudget was due to the extra works necessitated by the condition of the ground through which they tunnel passes