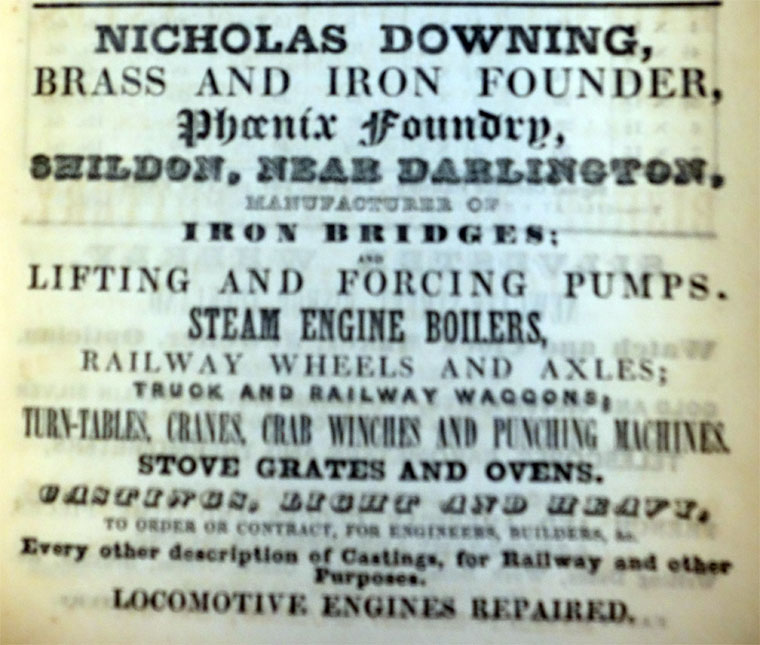 Nicholas Downing (1805-1872) of Phoenix Foundry, Shildon and Hackworth and Downing

1833 Timothy Hackworth opened new workshops, foundry and built houses for workers[2] at New Shildon, where locomotive, marine, and industrial engines and boilers were built. He placed his brother Thomas in charge along with Nicholas Downing and the business was initially called Hackworth and Downing. This was known as the Phoenix Iron Works. Downing dropped out later.

1843 Mention of Nicholas Downing, Ironfounder, of Chester-le-Street in connection with the effects of the Iron and Brass foundry recently owned by George Downing, deceased.[4]

1845. Mentioned. Nicholas Downing is the owner of an extensive foundry and timber yard at Shildon, near Durham.[5]

1854 Fire at the premises of Nicholas Downing, Iron Foundry, Shildon.[8]

1858 Executor of an estate. '...that Nicholas Downing, of Shildon, in the county of Durham, Ironfounder, by indenture, dated the 17th day of November instant, conveyed and assigned all his real and personal estate and effects unto Alfred Hollis, of Darlington, in the said county of Durham, Iron Manufacturer, and Thomas Dunford, of the town and county of Newcastle-upon-Tyne, Agent, in trust, for the equal benefit of all the creditors of the said Nicholas Downing, who should execute the said indenture; and that the same indenture was duly executed by the said Nicholas Downing, Alfred Hollis, and Thomas Dunford, on the day of the date thereof...'[9][10]