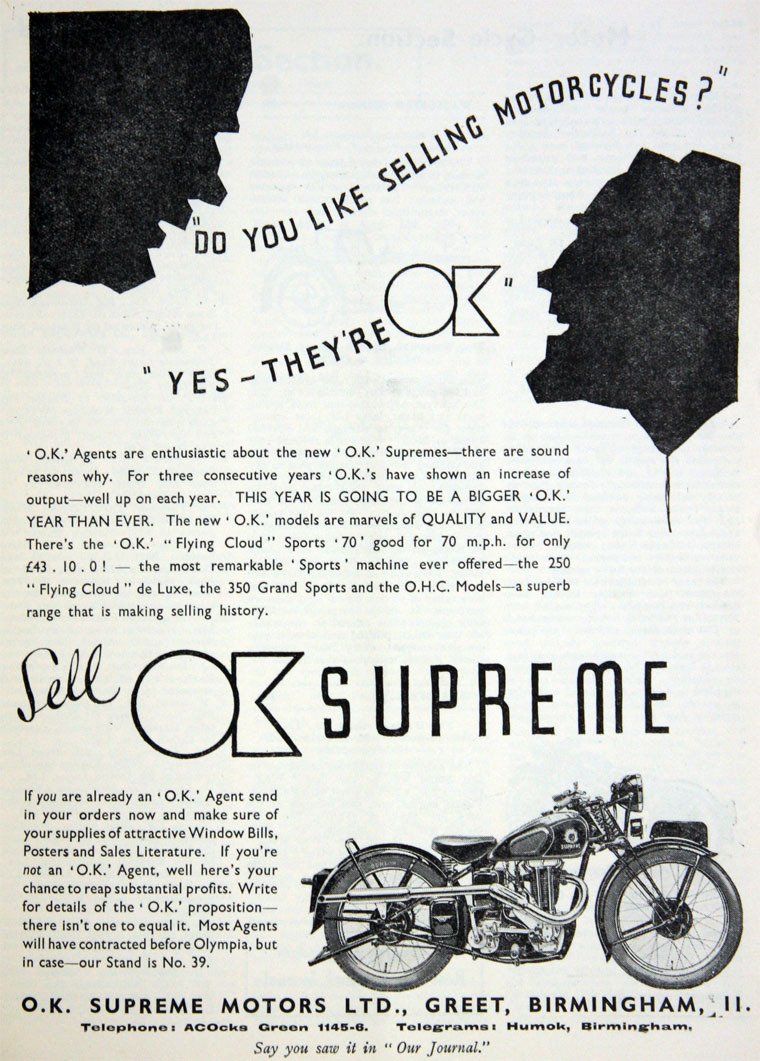 1926 Company formed by Ernie Humphries after the split-up of the Humphries and Dawes firm, making OK motorcycles. His partner Fred Dawes decided to stick to making pedal cycles.

The OK Supreme Company of Birmingham was a family concern of Ernie Humphries, and involving his son John and daughters Freda and Alice. The Humphries designed an attractive range of sporty machines mostly fitted with JAP engines

1926 The existing OK range continued with the production of various two-strokes and four-strokes, fitted with JAP, Bradshaw or Blackburne engines.

1927 Only JAP engines were used. A machine was placed at the TT, to take third in the Lightweight.

1928 A machine fitted with a modified JAP engine, with a new cylinder head, twin exhaust ports and a down-draught inlet, won its Lightweight class at the TT. Ernie Humphries bought the failing HRD Motors for the factory and tools, selling the rest, including the name, to Philip Vincent.

1929 Further racing successes inspired the firm to extend its range, mostly with JAP engines, but some still with Blackburne.

1930 Expansion continued, but it was the older models with JAP engines that were placed in the TT.

1931 A Lighthouse 25cc to 348cc model, so named because of the little inspection window in the cam tower, was launched.

The firm began to give all its models names. The best knowm were the Flying Clouds. All the machines kept pace with changing trends and engines developed, most from JAP.

1940 Although production had ceased the previous year, OK-Supreme was still listed until the end of the year. The firm then became involved with vital war work.